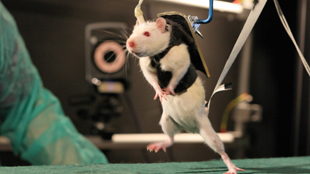 After several weeks of neurorehabilitation with a combination of robotic harness and electro-chemical stimulation, previously paralyzed rats are not only voluntarily initiating a walking gate, but they are soon sprinting, climbing up stairs and avoiding obstacles.EPFL

Brain engagement and nerve stimulation work together to help paralyzed rats regain the ability to walk: Engaging the rats in specific tasks, such as obtaining a treat, while stimulating the spinal cord and forcing the animals to mimic walking movements a Swiss-led team of international scientists was able to restore voluntary movement. The results, published today (May 31) in Science, gives insight into how the nervous system reorganizes to compensate for severe spinal injuries and points to future strategies for treating patients with paralyzed limbs.

“The crux of the study is that if you do [rehab] right, you can restore voluntary control through new [nerve] circuits,” explained Michael Beattie, a...

The combination of training and nerve stimulation has already been shown to restore function after paralysis, said V. Reggie Edgerton, a physiologist at the University of California, Los Angeles. For example, his own work with a human patient demonstrated that such brain engagement and nerve stimulation synergized to enable the patient to regain some control over leg movement after a paralyzing injury.

To examine how training and nerve stimulation might combine to help paralyzed patients regain motor function, Grégroire Courtine at the University of Zurich and the Swiss Federal Institute of Technology and his colleagues designed a spinal cord injury model in rats. Spinal cord injuries in humans that induce total paralysis do not always result from complete severing of the spinal cord, so Courtine and his colleagues carefully cut halfway across rats’ spinal cords about midway down their backs, and then cut across the other half a bit lower down. Although no single nerve ran intact up the spine, the damage was not total, explained Courtine.

Next came a specially designed support jacket, which the researchers believe help the rats feel safe enough to walk, but didn’t force movement, said Courtine. Without stimulation, the spinal nerves below the injuries were dormant, but a combination of neurotransmitters and electrical impulses helped raise their excitability to the point that proper sensory input could produce involuntary stepping motions. That sensory input came when the researchers placed the rats on treadmills. But this was not enough—even after weeks of “training” on the treadmill, the involuntary motions could not help the rats regain control of their limbs.

The trick was making the brain “want to step,” Edgerton explained. The researchers achieved this by providing the animals with a reward (treats, for instance) that they had to walk to reach. With this encouragement, the rats slowly regained the ability to initiate walking, but only when receiving the electrochemical stimulation that boosted the excitability of the neurons below the injury. “After about 5 to 8 weeks, they could sprint with their entire body weight,” noted Courtine, or avoid obstacles—but again, only with the nerve stimulation.

“The mechanism [underlying rehabilitation] was surprising,” Courtine said. Closer investigations of the injuries showed extensive reorganization of the neurons projecting from the rats’ motor cortex down the spine. But rather than growing to reach their initial end points, the neurons appeared to be reorganizing, forming new connections and circuits around the site of injury.

Courtine and his colleagues found that rats trained with voluntary activities had increased nerve fiber density and that these fibers appeared to be making synapses with relay neurons in the spine, which help connect signals between the muscles and brain but don’t extend all the way to the motor cortex. In the brain stem, these mice also exhibited increases in fiber density, as well as greater innervation of fibers important in initiating and sustaining movement. The results show how “the motor cortex will reorganize and … use the residual capacity of the spinal cord,” Beattie said.

Activating both the descending pathways (engaging the rats’ brains) and ascending pathways (through nerve stimulation and treadmill locomotion) was critical for the technique’s success, said Edgerton, who has collaborated with Courtine in the past, but did not participate in the current study. But still, the rodents were never able to initiate movement in the absence of the electrical and chemical stimulation of the nerves below the injury. The next steps, he said, will be gleaning more detailed information about how and where to stimulate the spinal cord, which in turn could help extend such strategies to human patients.

“It’s really fascinating,” said Courtine, “the tremendous potential plasticity [of the spinal cord] even after such a serious lesion.”