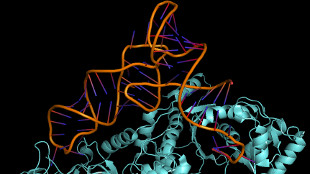 There may be more to the human proteome than previously thought. Some genes are known to have several different alternatively spliced protein variants, but the Scripps Research Institute’s Paul Schimmel and his colleagues have now uncovered almost 250 protein splice variants of an essential, evolutionarily conserved family of human genes. The results were published today (July 17) in Science.

Focusing on the 20-gene family of aminoacyl tRNA synthetases (AARSs), the team captured AARS transcripts from human tissues—some fetal, some adult—and showed that many of these messenger RNAs (mRNAs) were translated into proteins. Previous studies have identified several splice variants of these enzymes that have novel functions, but uncovering so many more variants was unexpected, Schimmel said. Most of these new protein products lack the catalytic domain but retain other AARS non-catalytic functional domains.

“The main point is that a vast new area of biology, previously missed,...

“This is an incredible study that fundamentally changes how we look at the protein-synthesis machinery,” Michael Ibba, a protein translation researcher at Ohio State University who was not involved in the work, told The Scientist in an e-mail. “The unexpected and potentially vast expanded functional networks that emerge from this study have the potential to influence virtually any aspect of cell growth.”

The team—including researchers at the Hong Kong University of Science and Technology, Stanford University, and aTyr Pharma, a San Diego-based biotech company that Schimmel co-founded—comprehensively captured and sequenced the AARS mRNAs from six human tissue types using high-throughput deep sequencing. While many of the transcripts were expressed in each of the tissues, there was also some tissue specificity.

The AARS enzymes—of which there’s one for each of the 20 amino acids—bring together an amino acid with its appropriate transfer RNA (tRNA) molecule. This reaction allows a ribosome to add the amino acid to a growing peptide chain during protein translation. AARS enzymes can be found in all living organisms and are thought to be among the first proteins to have originated on Earth.

To understand whether these non-catalytic proteins had unique biological activities, the researchers expressed and purified recombinant AARS fragments, testing them in cell-based assays for proliferation, cell differentiation, and transcriptional regulation, among other phenotypes. “We screened through dozens of biological assays and found that these variants operate in many signaling pathways,” said Schimmel.

“This is an interesting finding and fits into the existing paradigm that, in many cases, a single gene is processed in various ways [in the cell] to have alternative functions,” said­ Steven Brenner, a computational genomics researcher at the University of California, Berkeley.

The team is now investigating the potentially unique roles of these protein splice variants in greater detail—in both human tissue as well as in model organisms. For example, it is not yet clear whether any of these variants directly bind tRNAs.

“I do think [these proteins] will play some biological roles,” said Tao Pan, who studies the functional roles of tRNAs at the University of Chicago. “I am very optimistic that interesting biological functions will come out of future studies on these variants.”

Brenner agreed. “There could be very different biological roles [for some of these proteins]. Biology is very creative that way, [it’s] able to generate highly diverse new functions using combinations of existing protein domains.” However, the low abundance of these variants is likely to constrain their potential cellular functions, he noted.

Because AARSs are among the oldest proteins, these ancient enzymes were likely subject to plenty of change over time, said Karin Musier-Forsyth, who studies protein translational at the Ohio State University. According to Musier-Forsyth, synthetases are already known to have non-translational functions and differential localizations. “Like the addition of post-translational modifications, splicing variation has evolved as another way to repurpose protein function,” she said.

One of the protein variants was able to stimulate skeletal muscle fiber formation ex vivo and upregulate genes involved in muscle cell differentiation and metabolism in primary human skeletal myoblasts. “This was really striking,” said Musier-Forsyth. “This suggests that, perhaps, peptides derived from these splice variants could be used as protein-based therapeutics for a variety of diseases.”