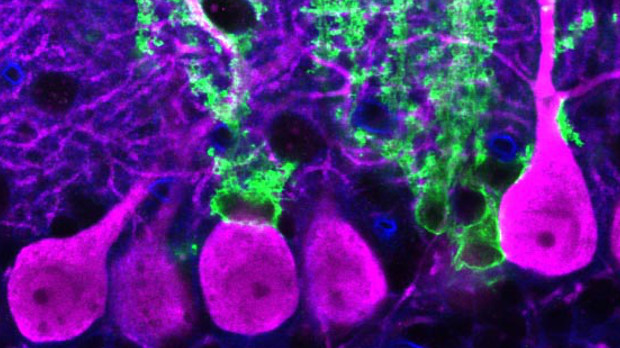 Neurons (magenta) signal to astrocytes (green)TODD FARMER, MCGILL UNIVERSITY HEALTH CENTRENeurons in the adult mouse brain can shape the features and physiologies of nearby astroglial cells, according to a study published today (February 18) in Science. Researchers at McGill University in Montreal and their colleagues have identified a molecular signal called sonic hedgehog (Shh), secreted by neurons, that acts as the agent of change.

“What’s very exciting about the paper is this notion that a cell’s fate might be determined—after it has already established its morphology and location in the brain—based on interactions with its neighbors,” said neurologist Ed Ruthazer of the Montreal Neurological Institute at McGill who was not involved in the research. “And the conversion is not superficial,” he added, “it really does seem to fundamentally reorganize the transcriptome of the cell.”

Astroglia are non-neuronal cells in the central nervous system that generally support and...

Murai and his colleagues had a different view, however. “Some of these [astrocytes] are so specialized around certain neural circuits that it was hard to imagine that all of the properties of these cells could be determined by that point [in development],” he said. After all, the neural circuitry itself isn’t fully formed until much later.

To investigate whether astrocyte identity might continue to be shaped beyond the perinatal period, Murai’s team searched for gene products in adult neurons and astrocytes that might govern continuing development. To simplify matters, the researchers focused on the cerebellar cortex, where just two types of astrocyte exist—Bergmann glial cells (BGs), which encapsulate the impulse-receiving regions of Purkinji cell neurons (PCs), and velate astrocytes (VAs), which surround granule cell neurons (GCs). Their searches revealed many candidate factors, said Murai, but one pathway kept coming up: Shh signaling.

Shh is a developmental morphogen known to have many important roles in the developing embryo, including the specification of cells in the brain, explained Murai. “People thought that the pathway was shut down and eliminated from the brain after it developed,” he said, “but as it turns out, this pathway is very potent even in the adult brain.”

The team found that the Shh protein itself was produced by PC neurons in the cerebellum, and that Shh receptors were abundantly expressed in BG, but not VA cells.

Furthermore, BGs required Shh signals from PCs to maintain their identities. When transgenic techniques were used to switch off either Shh production in PCs or Shh signaling in BGs in adult mouse brains, the BG cells adopted a transcription profile similar to that of VAs. If Shh signaling in VAs was given a boost on the other hand, these cells became more like BGs.

We could “almost interconvert one type of astrocyte into another based upon the level of Shh signaling,” said Murai. And it wasn’t just a handful of factors, he added: “We’re talking about hundreds of genes that are either being turned on or turned off in response to this pathway.”

The team also found evidence that astrocytes in other brain regions were influenced by Shh manipulations, and that these cells’ electrophysiologies were altered as a result.

“The key message is that astrocytes’ molecular fate is not hardwired,” said cell biologist Cagla Eroglu of Duke University in Durham, North Carolina, who did not participate in the study. The shapes of these cells appear to be less malleable, however. While Shh signaling influenced astrocyte expression profiles and electrical behaviors, the cells’ morphologies remained largely unchanged.

The finding that astrocyte identity is considerably more plastic than previously thought is “exciting and interesting,” added Eroglu, “but it remains to be seen what the exact function of this will be in terms of an animal’s behavior or its ability to learn.”