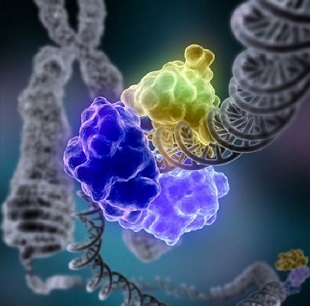 Illustration of DNA ligase, one of the cell proteins involved in repairing double-strand breaks in DNAWIKIMEDIA; WASHINGTON UNIVERSITY SCHOOL OF MEDICINE IN ST. LOUIS, TOM ELLENBERGERMost genetic diseases in humans are caused by point mutations—single base errors in the DNA sequence. However, current genome-editing methods cannot efficiently correct these mutations in cells, and often cause random nucleotide insertions or deletions (indels) as a byproduct. Now, researchers at Harvard University have modified CRISPR/Cas9 technology to get around these problems, creating a new “base editor,” described today (April 20) in Nature, which permanently and efficiently converts cytosine (C) to uracil (U) bases with low error in human and mouse cell lines.

“There are a lot of genetic diseases where you would want, in essence, to swap bases in and out,” said Jacob Corn, scientific director of the Innovative Genomics Initiative at the University of California, Berkeley, who was...

To date, CRISPR/Cas9 genome-editing approaches have relied on a cellular mechanism called homology-directed repair, which is triggered by double-strand breaks in DNA. Researchers supply cells with a template containing the desired sequence, make a targeted double-strand break with the Cas9 enzyme, and then wait to see whether homology-directed repair incorporates the template to reconnect the strands. Unfortunately, this method is inefficient (incorporation is rare) and often introduces new errors in the form of random indels around the break, making it impractical for therapeutic correction of point mutations.

So researchers at Harvard, led by chemist and chemical biologist David Liu, tried a different approach. First, they inactivated part of Cas9 so that it couldn’t make the double-strand break. They then tethered Cas9 to an enzyme called cytidine deaminase that directly catalyzes conversion of C to U (essentially an equivalent of thymine, T), without DNA cleavage. Sending this machinery into cells creates a mismatched pair at the target, comprising the newly introduced U, and an original guanine base (G) on the opposite strand. “This [mismatch] distorts the DNA,” Liu explained. “It creates a funny little bulge that doesn’t look normal.”

The bulge alerts a different cellular repair mechanism, mismatch repair, which removes one of the mismatched bases and replaces it with the complement to the remaining one. Without any information about which base is incorrect, mismatch repair produces the desired G to A conversion about 50 percent of the time; the rest of the time it converts the U back into a C.

The team again modified Cas9, this time so that it would create a nick in the nonedited, G-containing strand, while leaving the edited, U-containing strand intact. “Now the cell says, ‘Aha, there’s a mismatch here, and the base at fault must be the G, because that must be a newly synthesized strand because it has a nick in it,’” said Liu. “It will preferentially correct that G, using the other strand as a template.”

Using the technique at six loci in human cells, the team reported a targeted base correction rate of up to 37 percent, with only around 1 percent of the sequences showing indels. By contrast, a normal Cas9 editing technique tested on three of those loci showed less than one percent efficiency, and more than four percent formation of indels. The researchers also demonstrated the technique’s potential to correct disease-associated mutations by converting a variant of APOE, a gene linked with Alzheimer’s, into a lower risk version in mouse cells.

“By engineering this Cas9, they’ve figured out a really nice way to trick the cell into preferring pathways that it would normally not prefer,” said Corn. However, because the method is currently only able to convert C-G to U-A (i.e., T-A) base pairs, and in some cases edits other C bases in the immediate vicinity of the target, “it’s certainly not a panacea,” he cautioned. “It doesn’t mean that you can now cure every genetic disease out there. But there are probably going to be quite a few that fit into this category.”

The University of Oxford’s Tudor Fulga called the technique “an extremely ingenious idea” to get around inefficient homology-directed repair, and to reduce unwanted indel formation. “I think this will set up a paradigm shift in the field,” he told The Scientist. “It is very likely that the impact of Cas9-mediated base editing is going to be massive—both in terms of answering basic research questions and in genome engineering–based therapeutic applications.”

Also appearing in Nature today are two studies addressing a potential alternative to Cas9: the Cpf1 enzyme. CRISPR/Cpf1 creates “sticky ends”—overhangs in cleaved DNA that leave unpaired bases either side of the break—rather than the blunt ends made by Cas9’s double-strand DNA cleavage.

Emmanuelle Charpentier and colleagues at the Max Planck Institute for Infection Biology in Germany have shown that, unlike Cas9, Cpf1 processes RNA in addition to cleaving DNA. Meanwhile, Zhiwei Huang of the Harbin Institute of Technology, China, and colleagues have described the crystal structure of CRISPR/Cpf1.

“Sticky ends are more efficient [than blunt ends] for DNA repair in cells,” Huang told The Scientist. “We believe that [understanding] the structure of Cpf1 will help us not only to know the working mechanism of Cpf1 but also to design more specific and more efficient genome-editing tools.”