African killifish (Nothobranchius furzeri), which spend their embryonic lives in dried pockets of the African savannah, can attain sexual maturity in as little as two weeks after hatching, according to research published in Current Biology today (August 6). The researchers write in their paper that this is the “fastest rate of sexual maturation recorded for a vertebrate.”

“We guessed that some populations of this species could achieve very rapid growth and sexual maturation under particular conditions,” coauthor Martin Reichard of the Czech Academy of Sciences says in a statement. “But we have found that this rapid maturation is the norm rather than a rare exception.”

The researchers surveyed wild populations of the killifish in southern Mozambique to find that the fish grow rapidly, going from 5 mm in length to 54 mm in 14 days. The scientists also collected the killifish from different pools and analyzed their gonads within three weeks of rainfall, which induces hatching the fish’s eggs to hatch.

The freshwater fish are found in regions with uncertain precipitation, and their survival depends on embryos reaching full maturity and reproducing before the next dry patch appears. In a laboratory environment, the fish take between three to ten weeks to mature. The species’ short lifespan has made it a model for aging studies. 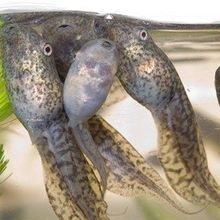