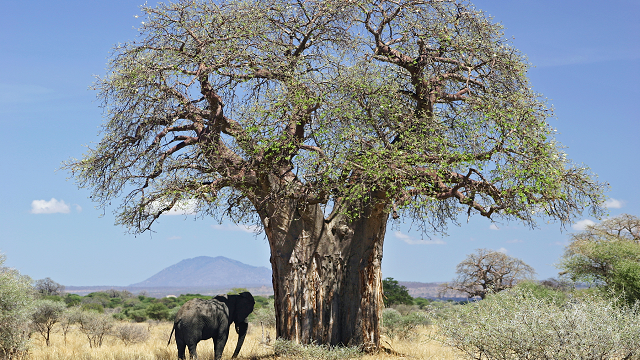 WIKIMEDIA, FERDINAND REUSAfrica’s baobab trees, the largest and longest-living flowering plants in the world, are dying at a startling rate, according to a study published yesterday (June 11) in Nature Plants. An international team of researchers found that nine of the 13 oldest African baobabs (Adansonia digitata)—all more than 1,000 years old—and five of the six largest individuals have partially or completely died in the last 12 years. While the cause of the die-off is not yet certain, climate change has already been pegged by the team and by other researchers as the likely cause.

“When around 70 percent of your 1,500- to 2,000-year-old trees died within 12 years, it certainly is not normal,” Erika Wise, a geographer at the University of North Carolina, Chapel Hill, who was not involved in the work, tells The Atlantic. “It is difficult to come up with a...

The study is the culmination of multiple surveys carried out across southern Africa since 2005. While using radio carbon dating to investigate the age and structure of trees in Zimbabwe, Namibia, South Africa, Botswana, and Zambia, the team discovered that many baobabs had stems that had died completely, or had partially collapsed.

None of the trees showed obvious signs of infection, the researchers found, and the pattern of deaths did not fit what would be expected had the die-off been caused by a contagious disease. Instead, “we suspect this is associated with increased temperature and drought,” study coauthor Adrian Patrut of Babes-Bolyai University in Romania tells BBC News. “It’s shocking and very sad to see them dying,” he adds.

The authors note in their paper that more evidence is needed to determine whether climate change is indeed the cause of the die-offs. Nevertheless, the discovery is eye-opening as to the sensitivity of these seemingly indestructible trees, Henry Ndangalasi, a botanist at the University of Dar Es Salaam in Tanzania, tells National Geographic. “I think we take for granted that these giant trees have no problem,” he says.