Alaska Governor Mike Dunleavy (R) vetoed a line from the state’s budget that funds the University of Alaska system on June 28, reports KTVA. The cut amounts to $130 million, which is about 40 percent of the system’s total budget.

The cut will almost certainly lead to layoffs and program eliminations, Cathy Sandeen, the chancellor of the University of Alaska at Anchorage, tells Inside Higher Ed. “We don’t know how the system or board is going to carry out the cut across the various institutions,” Sandeen says. “Just conservatively it pencils out to be around 700 positions. That is massive.”

In response, the university’s Board of Regents held an emergency meeting, reports KTVA. Jim Johnsen, the president of the University of Alaska system, says he is implementing hiring and travel freezes, according to KTVA. He also says a furlough notice will go out to all staff members that in 60 days they will be on leave without pay. “A preliminary rough estimate is that we would need to reduce 1,300 faculty and staff across the university system,” he adds.

Rather than trimming resources across the board and potentially weakening each department, entire programs may need to be cut to make sure that the ones that remain are strong, Sandeen tells KTVA.

Dunleavy proposed similar, but smaller, cuts in previous versions of the budget. Johnsen says the university was expecting a $30–60 million reduction, which is much less than the current $130 million cut, according to Alaska Public Media. “This budget will impact everything we do in every location where we operate,” Johnsen said during the emergency meeting, according to Alaska Public Media.

Funding for community campuses such as the one in Juneau will stay intact, according to Alaska Public Media.

Dunleavy says the money saved from the university’s budget cut,is being redirected to the Alaska Permanent Fund, which provides dividends to state residents based on oil profits, according to Inside Higher Ed. University leaders are now lobbying lawmakers to override the veto. 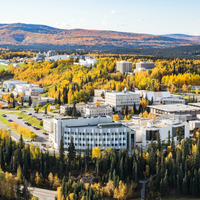