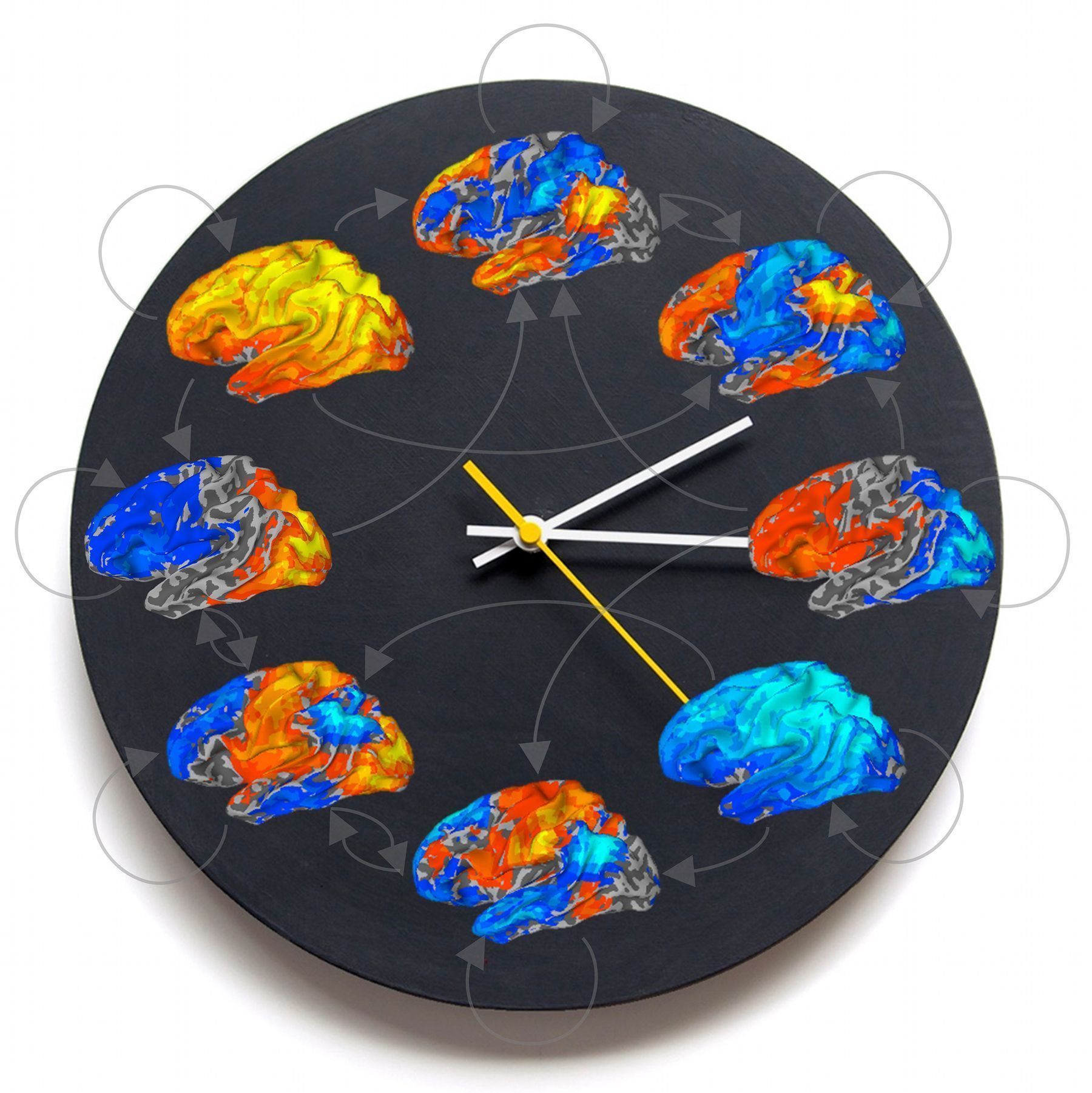 The human brain cycles through a set of activation states, or networks, and the particular cycling pattern is related to consciousness.
ZIRUI HUANG, UNIVERSITYOF MICHIGAN

A study of the brains of awake and unresponsive people confirms an existing idea about consciousness—that it balances self–awareness with awareness of one’s surroundings, and that this is represented in the brain by the alternating activation of two neural networks. The findings, which were published yesterday (March 11) in Science Advances, also show that these networks are but two of a larger set and that the conscious brain cycles through this set, activating each network independently, in a preferred pattern. In the brains of unresponsive individuals, the two awareness networks are activated far less often than the others.

“This is an interesting article showing that the push-pull relationship between two major human brain networks is disrupted in states of reduced consciousness,” Michael Fox , a neurologist at Harvard Medical School who was not involved in the study, writes in an email to The Scientist. “This held true across different types of reduced consciousness,” he continues, referring to the fact that the authors studied people under anesthesia as well as those with neuropathologies.

“It’s a very good paper,” adds Georg Northoff, a psychiatrist and neuroscientist at the Royal Ottawa Mental Health Centre who also was not involved in the work. It introduces a “temporal dimension” into the study of consciousness, he says, and is “the first to make a step in that direction.”

Human consciousness is thought to consist of both a person’s self-awareness and an awareness of their environment. Functional magnetic resonance imaging (fMRI) studies of the brains of people at rest or focused on tasks have identified two networks—collections of brain areas that are simultaneously active—that appear to correlate with such thoughts, namely, the default mode network (DMN), the activity of which tends to associate with restfulness and self-directed thoughts, and the dorsal attention network (DAT), which becomes activated when a person is focused on a task. Notably, these two networks are said to anticorrelate with each other. That is, when one is active the other is not.

The evidence for anticorrelation had been determined by averaging images collected over several minutes, explains coauthor Zirui Huang of the University of Michigan, and dynamic fluctuations of the two networks may have been missed. Furthermore, with such image averaging, a data processing technique called global signal regression that reduces noise is often used. But such noise reduction could falsely indicate the existence of anticorrelation, says Huang. Unequivocal evidence of DMN-DAT anticorrelation was therefore lacking.

In the new study, Huang and colleagues analyzed hundreds of 3-D fMRI brain scans from 98 individuals without reducing noise or averaging data. They captured images every two seconds over periods of 8–15 minutes to enable a hitherto unmatched level of dynamic detail. The subjects included healthy, non-anesthetized volunteers; healthy, anesthetized volunteers and patients given ketamine or propofol; individuals with unresponsive wakefulness syndrome—patients who are awake but show no signs of awareness; and individuals in minimally conscious states.

To analyze the large dataset, the team employed a machine-learning algorithm that looked for networks—areas across the brain that are consistently activated together. The approach revealed that, as well as the previously identified DMN and DAT, there were six other networks occurring in all of the participants’ brains. The authors referred to these as the frontal parietal network, the sensory and motor network, the visual network, the ventral attention network, and the global networks of activation and deactivation. The image analysis also showed that human brains tend to turn on these different networks in a preferred cyclical order and that, as had been previously suspected, DMN and DAT are indeed anticorrelated.

In subjects who were either anesthetized or unresponsive due to neuropathological conditions, the team observed that both DMN and DAT were “visited less often,” says Huang, meaning the number of times they were activated within the cycling patterns of networks was reduced. This is in line with the fact “that under anesthesia there is a loss of [awareness] of self and environment,” he says.

While it is as yet unclear whether such diminished DMN and DAT activation is a cause or consequence of reduced consciousness, it might nevertheless serve as a useful clinical marker of unconsciousness. For example, says neurologist Steven Laureys of Liège University Hospital who did not participate in the study, “it could reduce the uncertainty related to coma [patients] who can’t communicate . . . and whether they have conscious thought and perception.” Assessing DMN and DAT activation might also help with refining dosages of anesthetic drugs, he suggests. “This is a very important contribution to the field,” he says.

Ruth Williams is a freelance journalist based in Connecticut. Email her at ruth@wordsbyruth.com or find her on Twitter @rooph