It was the first time a bird has removed a tracking device, and the second time a bird species showed cooperative “rescue” behavior.

When we attached tiny, backpack-like tracking devices to five Australian magpies for a pilot study, we didn’t expect to discover an entirely new social behaviour rarely seen in birds.

Our goal was to learn more about the movement and social dynamics of these highly intelligent birds, and to test these new, durable and reusable devices. Instead, the birds outsmarted us.

As our new research paper explains, the magpies began showing evidence of cooperative “rescue” behaviour to help each other remove the tracker.

While we’re familiar with magpies being intelligent and social creatures, this was the first instance we knew of that showed this type of seemingly altruistic behaviour: helping another member of the group without getting an immediate, tangible reward.

As academic scientists, we’re accustomed to experiments going awry in one way or another. Expired substances, failing equipment, contaminated samples, an unplanned power outage—these can all set back months (or even years) of carefully planned research.

For those of us who study animals, and especially behaviour, unpredictability is part of the job description. This is the reason we often require pilot studies.

Our pilot study was one of the first of its kind—most trackers are too big to fit on medium to small birds, and those that do tend to have very limited capacity for data storage or battery life. They also tend to be single-use only.

A novel aspect of our research was the design of the harness that held the tracker. We devised a method that didn’t require birds to be caught again to download precious data or reuse the small devices.

One of the trackers we attached to five magpies, which weighs less than one gram
Dominique Potvin

We trained a group of local magpies to come to an outdoor, ground feeding “station” that could either wirelessly charge the battery of the tracker, download data, or release the tracker and harness by using a magnet.

The harness was tough, with only one weak point where the magnet could function. To remove the harness, one needed that magnet, or some really good scissors. We were excited by the design, as it opened up many possibilities for efficiency and enabled a lot of data to be collected.

We wanted to see if the new design would work as planned, and discover what kind of data we could gather. How far did magpies go? Did they have patterns or schedules throughout the day in terms of movement, and socialising? How did age, sex or dominance rank affect their activities?

All this could be uncovered using the tiny trackers—weighing less than one gram—we successfully fitted five of the magpies with. All we had to do was wait, and watch, and then lure the birds back to the station to gather the valuable data. 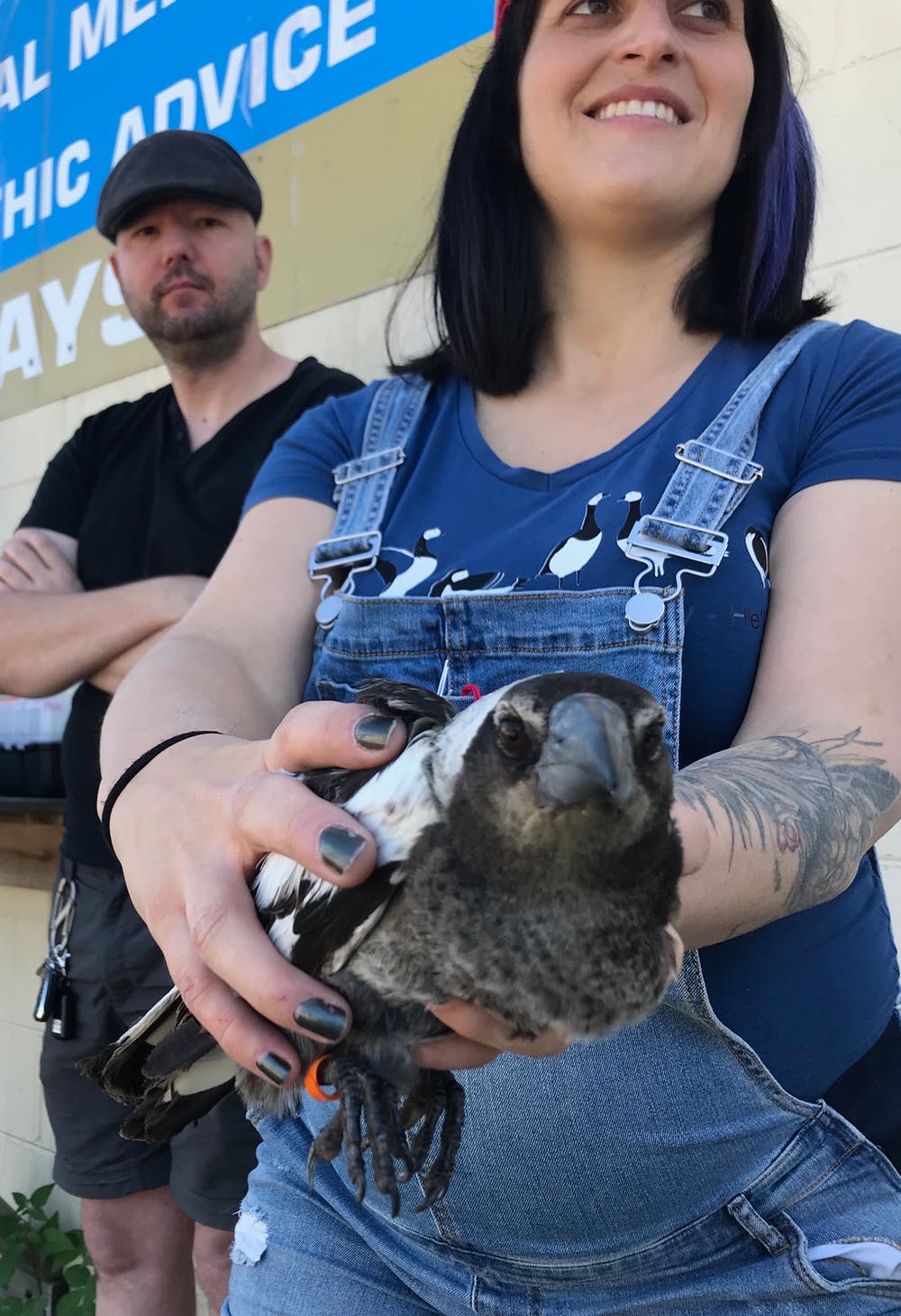 This magpie wasn’t sure what to think of its new accessory.
Dominique Potvin

It was not to be

Many animals that live in societies cooperate with one another to ensure the health, safety and survival of the group. In fact, cognitive ability and social cooperation has been found to correlate. Animals living in larger groups tend to have an increased capacity for problem solving, such as hyenas, spotted wrasse, and house sparrows.

Australian magpies are no exception. As a generalist species that excels in problem solving, it has adapted well to the extreme changes to their habitat from humans.

Australian magpies generally live in social groups of between two and 12 individuals, cooperatively occupying and defending their territory through song choruses and aggressive behaviours (such as swooping). These birds also breed cooperatively, with older siblings helping to raise young.

During our pilot study, we found out how quickly magpies team up to solve a group problem. Within ten minutes of fitting the final tracker, we witnessed an adult female without a tracker working with her bill to try and remove the harness off of a younger bird.

Within hours, most of the other trackers had been removed. By day 3, even the dominant male of the group had its tracker successfully dismantled.

We don’t know if it was the same individual helping each other or if they shared duties, but we had never read about any other bird cooperating in this way to remove tracking devices.

The birds needed to problem solve, possibly testing at pulling and snipping at different sections of the harness with their bill. They also needed to willingly help other individuals, and accept help.

The only other similar example of this type of behaviour we could find in the literature was that of Seychelles warblers helping release others in their social group from sticky Pisonia seed clusters. This is a very rare behaviour termed “rescuing.” 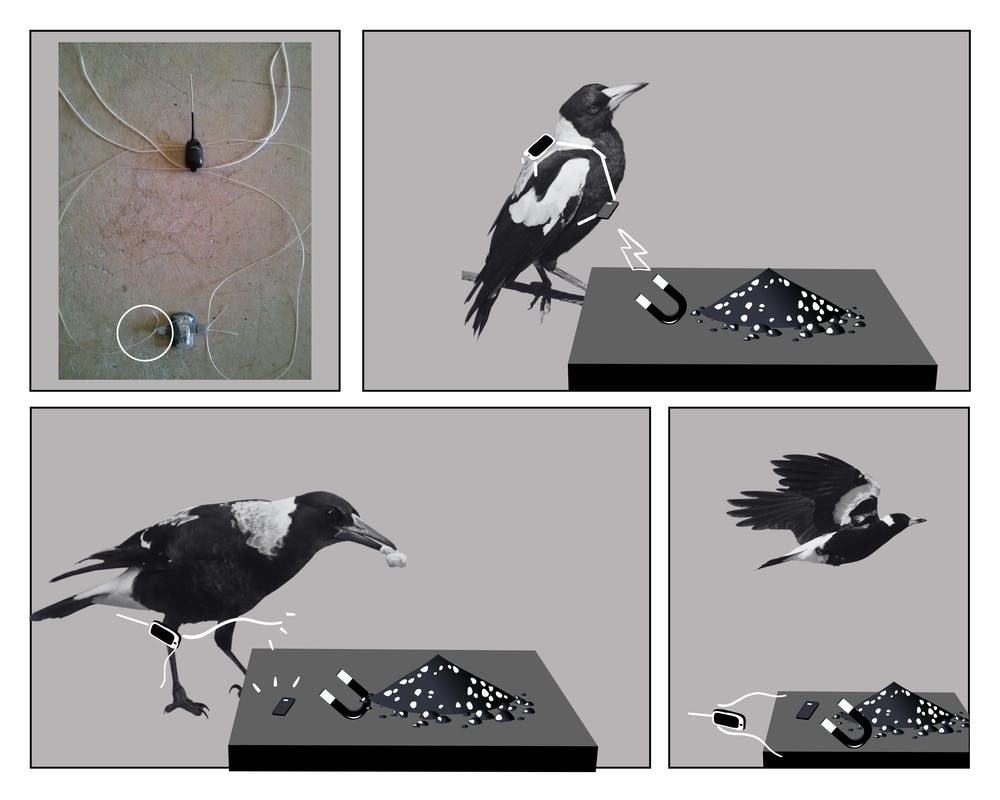 Our new tracker design was innovative, allowing a magnet to release the harness.
Dominique Potvin

So far, most bird species that have been tracked haven’t necessarily been very social or considered to be cognitive problem solvers, such as waterfowl and raptors. We never considered the magpies may perceive the tracker as some kind of parasite that requires removal.

Tracking magpies is crucial for conservation efforts, as these birds are vulnerable to the increasing frequency and intensity of heatwaves under climate change.

In a study published this week, Perth researchers showed the survival rate of magpie chicks in heatwaves can be as low as 10%.

Importantly, they also found that higher temperatures resulted in lower cognitive performance for tasks such as foraging. This might mean cooperative behaviours become even more important in a continuously warming climate.

Just like magpies, we scientists are always learning to problem solve. Now we need to go back to the drawing board to find ways of collecting more vital behavioural data to help magpies survive in a changing world.

Dominique Potvin is a senior lecturer in animal ecology at the University of the Sunshine Coast.