ABOVE: A melted collection in the department of geology and paleontology at the National Museum in Rio de Janeiro
DIEGO VASCONCELLOS

Last weekend, Brazil’s National Museum in Rio de Janeiro celebrated its 201st anniversary—and the first one after the devastating fire that destroyed the museum’s main building last September. The museum had housed more than 20 million items, which formed some of the world’s largest and most valuable scientific collections.

The fire was consistently reported in the media as a “tragedy foretold.” The museum had been suffering from underfunding for years, and the building had critical structural problems. Despite repeated warnings of fire risk, the much-needed reais to make improvements did not arrive on time. On September 2, a short circuit in an air-conditioning system on the main floor caused a fire that rapidly spread throughout the building

“The fire was of great magnitude. When we looked at it,...

Although the losses were initially estimated to be about 90 percent of the archive, Serejo says staff members are recovering a lot more than expected. In addition to collections that had been spared from the blaze, another 2,000 to 3,000 items have been rescued from the rubble, she says, including most of the skull fragments from the oldest human remains found in South America. Also, while the main building was severely damaged, two other facilities and the collections therein were not affected. “We were able to promptly turn the tables,” she says. “The museum is alive, research continues.” 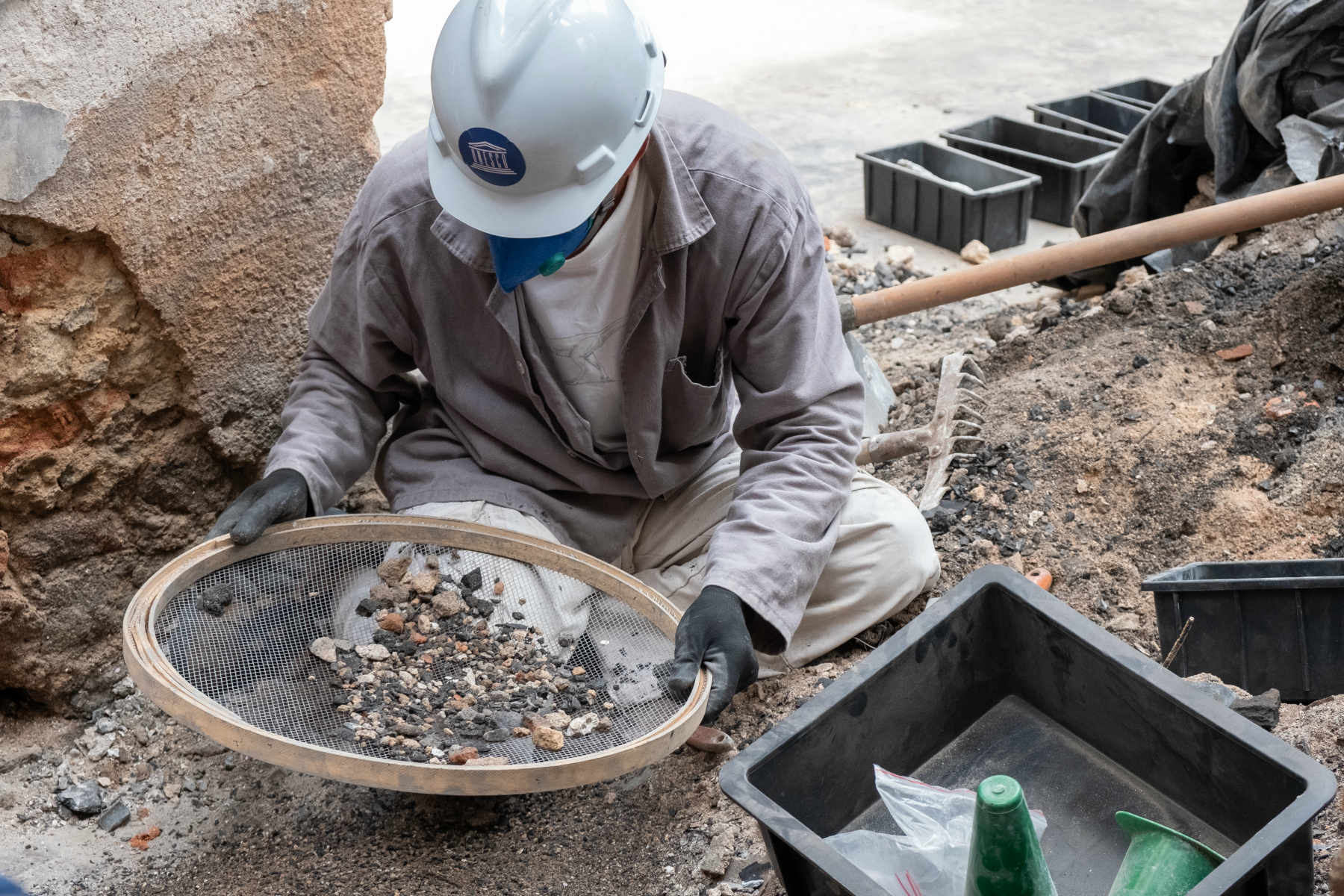 A museum worker sifts through the rubble to salvage items. The museum has recovered 2,000 to 3,000 items from the ash.
diego vasconcellos

Herpetologist José Pombal, who studies amphibians in the museum, notes that despite “all the despair and the chaotic situation,” classes were only interrupted for a week. “Post-graduation [courses] are taking place normally, theses are being defended. . . . People are working,” he says in Portuguese.

A few days after the fire, the Ministry of Education released 10 million reais ($2.5 million US) to be used in the rescue operations and emergency rehabilitation of the building. Another 5 million reais ($1.25 million US) were handed out to UNESCO, which, in collaboration with other institutions, is designing a project to reconstruct the museum.

In addition to that, the government is about to disburse a larger sum. In 2018, the Brazilian Congress passed an amendment to earmark 55 million reais ($14.1 million US) of the 2019 budget to be used in the restoration of the National Museum’s facade. But it now appears the museum will not receive all of the money.

Most of the resources devoted by the government were allocated or earmarked last year, during Michel Temer’s presidency, but the current president, Jair Bolsonaro, has instituted funding restrictions, including to education and science. The government has withheld 42 percent of the science budget and around 25 percent of funding for federal universities. As a consequence of the recent budget freezes, the restoration disbursement has recently dropped to 43.1 million reais ($11.1 million US).

The state of Rio de Janeiro’s research agency has pitched in 2.5 million reais ($640,000 US), aimed specifically at researchers from the museum. Seventy-two of them will receive an amount equivalent to $773 US a month during a year to use in research. 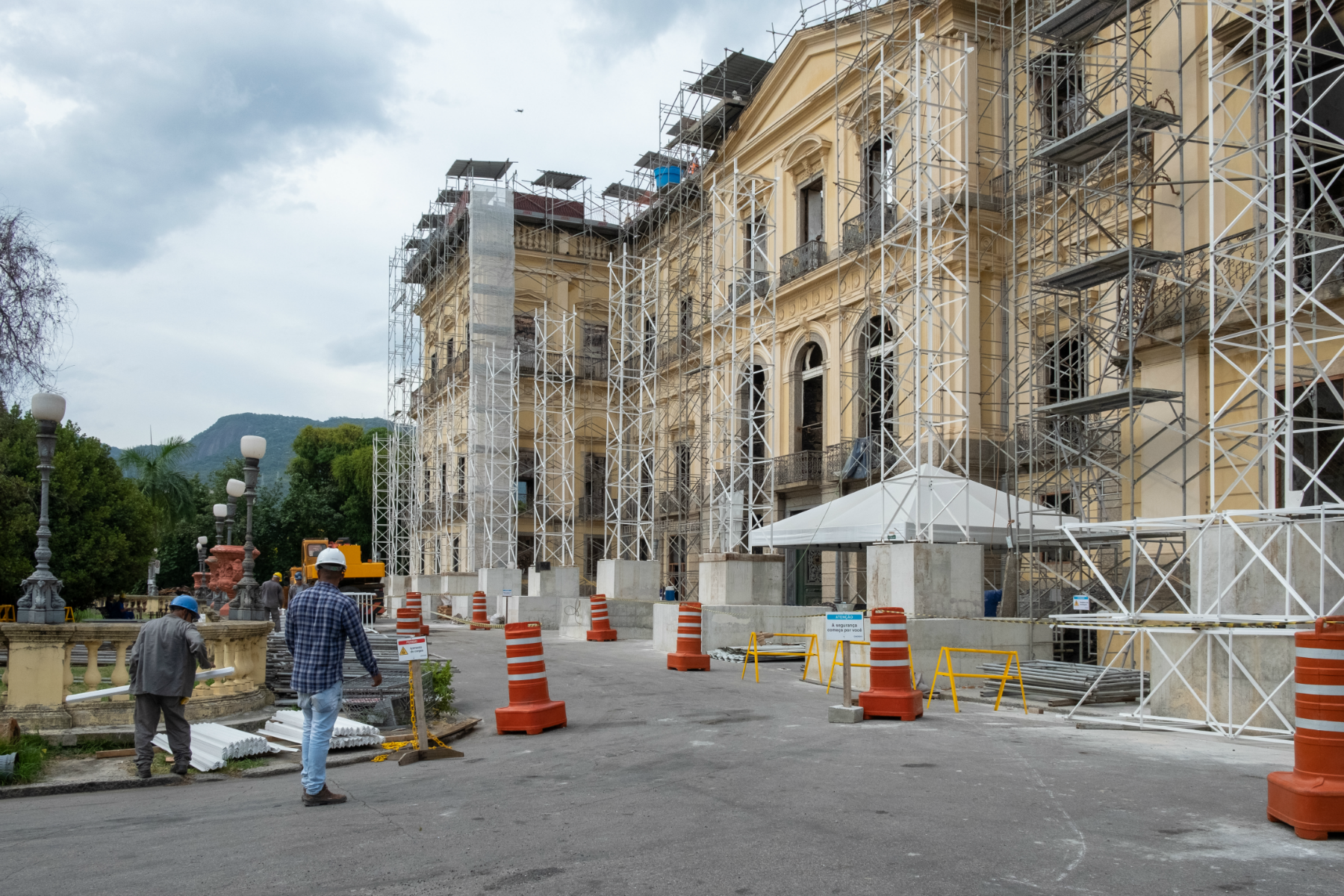 Scaffolding surrounds the museum in this February 2019 photo
diego vasconcellos

Zoologist Paulo Buckup, who studies tropical fish at the museum, welcomes this help but says the reconstruction is very challenging under the current scenario of budget cuts. He calls for more support from the federal government.

“It’s important to remember that the National Museum is a federal institution, dependent on the Ministry of Education. We rely on federal money to reconstruct the buildings. And what we’re seeing is that it is precisely the federal government who’s doing these cuts,” he says in Portuguese.

According to several researchers, a crucial point to reconstruct the museum is to obtain the permits to build on a land plot located next to the institution. The land was donated by the federal government to the museum last year, but loose administrative ends need tying up before the new facilities—laboratories and a visitors’ center—can be built.

Collaborations with scientific institutions, private entities, and foreign governments are helping to recreate the collections and shore up the careers of affected researchers. The Smithsonian Institution, for example, has given fellowships to students who lost their work so they can travel to the US to finish their research using the institution’s collection.

Pedro Souza-Dias, an entomologist who studies crickets, says that even amateurs are pitching in by donating specimens. The museum’s entomological collection, the largest of South America, was completely lost in the fire. Souza-Dias’s own cricket collection was saved because he still had not taken it to the museum yet as he had just joined the staff. “My first day of work should have been on Monday 3 [September], and on Sunday the fire happened,” he recalls in Portuguese.

The anthropology department was also badly hit by the fire. The collection included thousands of items from indigenous populations, historical maps, and recordings of native languages, among many other objects.. Despite all that was lost, Edmundo Pereira, head of the department, is optimistic about the situation. The rescue effort is helping scholars learn how different items are affected by fire and water. He has even started a new research line called “anthropology of disaster,” to study the socio-cultural processes involved in the reconstruction that follows dramatic events such as wars, dam collapses—or museum fires. Pereira also notes that relocating the affected researchers into their colleagues’ offices has fostered new collaborations. “The museum has never been so interdisciplinary as it is today,” he says in Portuguese.