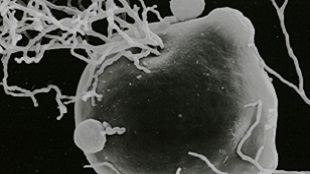 More than 200 frogs, toads, and other amphibian species around the world are threatened by a lethal skin disease caused by the chytrid fungus Batrachochytrium dendrobatidis (Bd). Last year, a related pathogen was discovered decimating populations of fire salamanders in the Netherlands and Belgium. The new microscopic killer, known as B. salamandrivorans (Bs), is only the second known species of its kind found to infect vertebrate hosts.

Now, an analysis of more than 5,000 amphibians from four continents suggests that Bs may have spread from Asia to Europe through pet trade. The results, published today (October 30) in Science, also reveal the extent to which other amphibian species are vulnerable to the fungus. So far, European newts and salamanders appear to be the most severely affected.

The study “is a stunning confirmation of the original paper that came out a year...

An Martel of Ghent University in Belgium and her colleagues first discovered Bs when analyzing samples from salamanders that had died a week after infection. To understand the potential impact this fungus could have on amphibians globally, the researchers experimentally infected 35 species, including frogs, toads, caecilians, salamanders, and newts. The infection was lethal to most of the European salamander species tested, but frogs and toads showed no signs of the fungus.

Although DNA tests suggested Asian salamanders carried the pathogen, the amphibians did not show the characteristic ulcers and skin lesions typically seen in diseased animals. Seven of the Asian species tested showed recurring signs of infection over a five month period during which the animals would excrete the fungus intermittently, but showed no clinical lesions, said Martel. Because the Asian species appear to carry the fungus with no ill-effects, these animals may have “coevolved with the fungus, [so] they can suppress the skin infection,” Martel told The Scientist. “This suggests that the fungus originates from Asia.”

Although Bs and Bd are both chytrid fungi, they are only distantly related at a genetic level: the researchers’ analysis suggests the two species diverged from one another approximately 30 million to 115 million years ago. The researchers also detected Bs in a museum specimen of a 150-year-old newt. When the group tested captive animals from pet shops in Europe and at an exporter’s store in Hong Kong for signs of disease, they found three of 1,765 Asian salamanders were infected with the fungus, but remained symptom-free.

To Wake’s mind, it’s not yet clear whether Bs originated in Asia. “I’m not completely convinced . . . only because the sampling in [other parts of the world] is very slender,” he says. “We still have a lot to learn. If it [Bs] acts the way Bd does, we’re in for quite a ride.”

In future work, Martel and her colleagues aim to understand the dynamics of Bs outbreaks, and whether the fungus can be vectored by other animals.

Although the evidence so far suggests Bs has a more restricted host range than Bd, infecting only European species of salamanders and newts, it could still have significant ecological impacts. If spread globally, it could potentially cause “massive declines in salamander populations, so it will have the same effects as Bd did on frogs,” said Martel. “Another class of vertebrates may go extinct.”