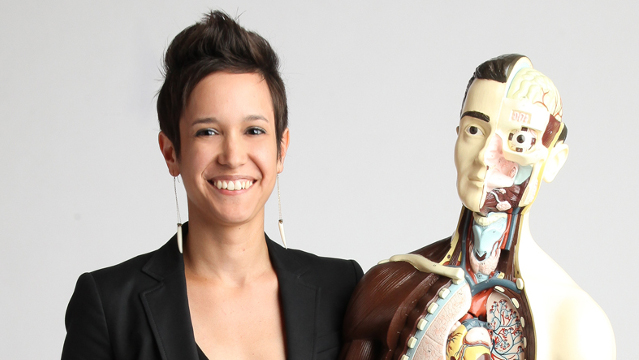 COURTESY OF VANESSA RUIZMost people learn the basics of human anatomy as children. Asked who taught them this information, many would acknowledge their parents, science teachers, and physicians. But what anyone who has ever flipped through a biology textbook or gazed at an anatomy diagram in a doctor’s office might not realize is that there’s another group that deserves credit for helping them see beneath their own skin: medical illustrators.

“It’s funny,” said medical illustrator Vanessa Ruiz. “Doctors and scientists tend to take [medical illustration] for granted. Many don’t realize that there are people who draw the body parts we see everywhere in medical literature.”

Ruiz, 30, is the driving force behind Street Anatomy, a blog that aggregates works that explore the intersection of art and medical illustration. Since its 2007 launch, Street Anatomy has published more than 1,000 posts, revealing human anatomy in pencil drawings, tattoos, 3-D...

Fascinated by the surge in street art that was happening in Chicago, where at the time she was pursuing a master’s degree in biomedical visualization at the University of Illinois, Ruiz created Street Anatomy in the hopes of taking medical illustration into more public spaces. Her first thought was to plaster the sides of city buildings with depictions of human body parts to expose commuters to anatomy as art. Instead, she built an online resource for the public to discover contemporary anatomical art, something that had not existed before. The timing couldn’t have been better, given the boom in social media and image-sharing tools, which significantly helped to boost Street Anatomy’s audience.

As an undergraduate student, Ruiz studied marine biology at the University of San Diego in California, where—upon viewing her sketches of laboratory animals—Michel Boudrias encouraged her to pursue a career in scientific illustration. While in graduate school, Ruiz found a lack of public knowledge about the profession.

“My parents at one point stopped trying to explain to people what a medical illustrator was, and started telling people I was in med school,” she told the audience at a July 25 discussion at the Morbid Anatomy Museum in Brooklyn, New York.

Now a freelance mobile app designer, Ruiz continues to seek out emerging anatomical artists to feature on her blog. One such artist, Emily Evans, is a medical illustrator who teaches human anatomy at the University of Cambridge. In addition to illustrating textbooks, Evans produces ceramic goods and wallpaper that feature histology images and organ motifs, respectively.

“[Ruiz] was the first person I’d ever met who’s as passionate as I am about medical illustration in a contemporary context,” said Evans. “Having her support has inspired me to keep creating works that show human anatomy.”

Through submissions to her blog, Ruiz has connected with a variety of artists, including the sculptor Jason Freeny, who alters children’s toys; Danny Quirk, an illustrator who paints on people’s bodies; and Stephen Gaeta, a physician-scientist at Duke University, who produced a typography print called “Beat Poetry,” which depicts a human heart composed of words from John Collins Warren’s 1809 text, “Cases of Organic Diseases of the Heart.”

“It’s natural for scientists to be exposed to graphic design, as we have to be able to visually present our work at conferences,” Gaeta told The Scientist. “I’m seeing more interest in the scientific community in using these methods to communicate research, but a lot of scientists still don’t appreciate the artistic tools at their disposal.”

Beyond the blog, Street Anatomy has expanded to include an online store where people can purchase anatomical artwork featured on the site. Ruiz also guest curates works for exhibitions on occasion. One such exhibit, “Objectify This,” which was on display at Chicago’s Design Cloud Gallery in 2012, focused on female anatomy, which Ruiz noted has been largely ignored and distorted in the history of medical illustration.

“A lot of people don’t know anything about their bodies—they’re more likely to know the parts of their car than where their spleen is located,” said Ruiz. “It’s so rewarding to take a complex concept, something that’s so dense on paper and apply the technical details into something that people can connect to and use to learn something about themselves.”