ABOVE: Lake Titicaca is where the ancient Andean samples were found.
© ISTOCK.COM, FILROM

Previous work has shown that populations in Tibet, for instance, have specific gene variants that help them metabolize oxygen and also safeguard them against vitamin D deficiency. Studies of Ethiopians also show genetic adaptations to survive hypoxic, or low-oxygen, levels at high altitudes. “In the Andes, we don’t see anything like that,” says John Lindo, an anthropologist at Emory University in Atlanta, referring to prior investigations of Andean genetic characteristics. “People are really curious as to how they adapted to high altitude if we can’t find this genetic component.”

To search for such genetic adaptations, Lindo and his colleagues acquired the whole genome sequences of seven individuals that lived at high altitude, roughly 2,500 meters above sea level, in the Andean mountains around 7,000 years ago. The team compared those genetic data to whole genome sequences of 64 people alive today who live either in the highlands of the Andes or the lowlands of Chile.

“We didn’t find anything specifically related to hypoxia,” Lindo tells The Scientist. On the other hand, the researchers did observe positive selection in the highlanders’ genomes for a gene called DST, essential for heart health. (Studies in mice show that DST mutations result in severe heart defects). The result supports work published about a year ago pinpointing three other genes related to cardiovascular health that may help modern-day Andeans survive at high altitudes, and suggests high-altitude adaptations could be connected to cardiovascular genetics.

See “The Genetic Strategies of Living at High Altitude”

To look for more genetic adaptations to high elevation, Lindo and his colleagues are now analyzing whole genome sequencing data from ancient Andeans that lived at lower altitudes. “The populations are closely related,” Lindo says, “so we should be able to pull out any high-altitude adaptations. The signal should be much stronger.”

In the current study, his group was also on the look out for adaptations to eating starch. Lake Titicaca, where the ancient Andean samples originated, is where the potato was first domesticated 6,000 years ago. In Europe, the rise of agriculture appears to be linked to positive selection for a gene called AMY1, which encodes the starch-digestion enzyme amylase. But the researchers didn’t see it.

Andeans must have developed a different way to process starches, the team reasoned, and one such possibility turned up in their search. They noticed that a different gene that encodes a starch-digestion enzyme, MGAM, was also positively selected for among the ancient genomes.

MGAM fits the Andean story, as other scientists recently suggested that the gene’s enzyme may be part of an alternate starch-digestion pathway activated under stress, and high altitude environments induce stress on the body, Lindo explains. “That’s as far as that correlation goes” for now, he says. He adds that “the potato is also the biggest culprit for carbs or starches, so it makes sense that we see a starch enzyme being selected.”

Lindo and his colleagues also modeled the demographics of the ancient populations in the Andean lowlands and highlands after they came in contact with Europeans to distinguish environmental adaptations from those influenced by historical events. After European contact, the population in the lowlands dropped drastically—by 96 percent. But in the highlands it only shrunk by 27 percent. The highland environment might have been so harsh that the Europeans couldn’t survive there and left before they decimated the high-altitude populations, Lindo says. But that may not be the whole story.

A scan for gene selection in the modern-day highland Andeans revealed a strong signal from CD83, a gene that encodes for an immune receptor and seems to be upregulated in response to the small pox vaccine. Because the modern high-altitude individuals are presumably descendants of ancient Andeans, the ancient highlanders may have had an advantage over lowlanders in combatting European diseases, or, at the very least, small pox. 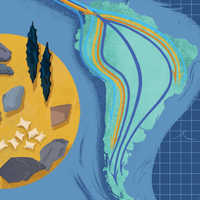