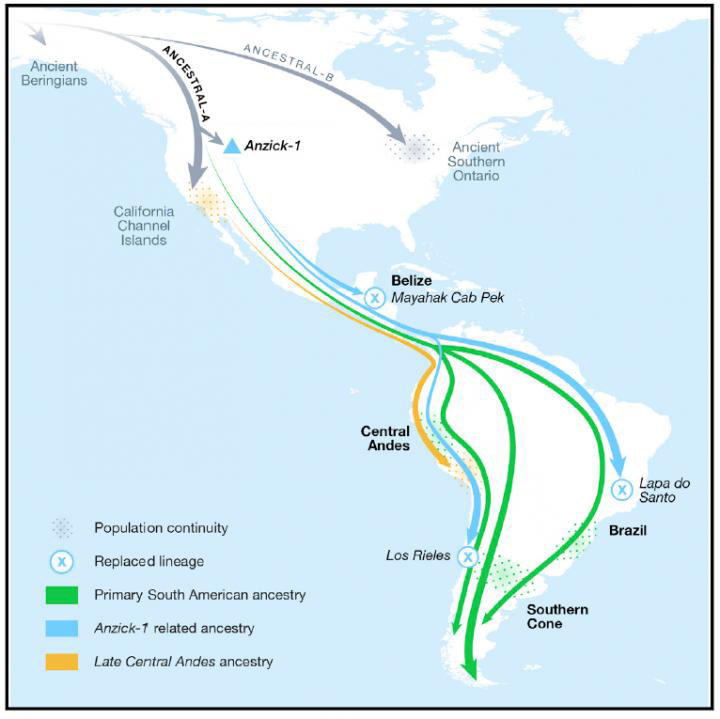 Early populations of humans in the Americas had the same ancestry as modern Native Americans, according to studies published today (November 8) in Cell and Science. The data dispel any ideas based on the skull shapes of a few ancient remains that early populations were not related to modern Native Americans and give more clues about the waves of people who migrated from North America to South America thousands of years ago.

The two studies combined analyzed the genomic data of more than 60 individuals who lived in the lands between Alaska and Patagonia 700 to 10,000 years ago. Because of the limited data prior to this work, “the [genetic] models that we’ve been using to explain the peopling of the Americas have always been oversimplified,” Jennifer Raff, an anthropological geneticist at the University of...

Willerslev’s data, reported in Science, show that “this is our homeland, these are our ancestors,” Rochanne Downs, the cultural coordinator of the Fallon Paiute-Shoshone Tribe in Nevada, where the team collected some of the data, tells Science. Willerslev’s team compared the genetic data of 10,700-year-old remains from the Spirit Cave, which the Fallon Paiute-Shoshone Tribe had been trying to repatriate, to that of 12,700-year-old remains from an Anzick child from Montana and found a related ancestry.

The child is considered part of what’s known as Clovis culture, and the results in Science link Clovis culture to both the Spirit Cave individual—who is associated with a tradition older than Clovis culture—and to 10,000-year-old remains from Brazil. “A key discovery was that a Clovis culture-associated individual from North America dating to around 12,800 years ago shares distinctive ancestry with the oldest Chilean, Brazilian, and Belizean individuals,” Cosimo Posth of the Planck Institute who coauthored the Cell study says in a media release. “This supports the hypothesis that the expansion of people who spread the Clovis culture in North America also reached Central and South America.”

The result also “tells us that the peopling of Central and South America not only was fast but also it was accompanied by multiple waves, some of which disappeared and some others which left a strong genetic impact all the way until today,” Posth tells Gizmodo.