Sequencing the genomes of 34 individuals hailing from Siberia, Alaska, and the land bridge that connected the two between 600 and more than 31,000 years ago, University of Copenhagen geneticist Eske Willerslev and colleagues identified a woman hailing from northeastern Siberia about 10,000 years ago who shares about two-thirds of her genome with the modern Native American population, according to a study published yesterday (June 5) in Nature.

“It’s the closest we have ever gotten to a Native American ancestor outside the Americas,” Willerslev tells Science.

The woman, called Kolyma1, is not part of the group that founded the Native American population; that migration happened much earlier. According to the analysis, Native Americans’ ancestors likely split from Kolyma1’s group about 24,000 years ago, aligning with previous work on when the initial migrations to North America took place.

In a second study, also published yesterday in Nature, Pavel Flegontov at the University of Ostrava in the Czech Republic and colleagues sequenced the genomes of 48 ancient remains from the American Arctic and Siberia, plus the genomes of individuals from modern Alaskan Iñupiat and West Siberian populations. They found that there was likely gene flow between the earliest people in the Americas and the Palaeo-Eskimos, who appear to have crossed the land bridge later than the first settlers, some 5,000 years ago, and whose relationship to modern populations is unclear.

The analysis from Felgontov and colleagues further suggests that the group that Kolyma1 evolved from is closely related to the Paleo-Eskimos, notes coauthor Ben Potter, an archaeologist at the University of Alaska in Fairbanks. “[They are] in the right spot to be ancestors, or related in some way, to the Paleo-Eskimos that expanded into North America around 5000 years ago,” he tells Science. “It fits together really nicely.”

The two studies also shed light on other elements of ancient human migrations. For example, the two oldest samples from Willerslev’s study—DNA extracted from the baby teeth of two males in northern Siberia—turned out not to be from ancestors of native North Americans, as was once thought. Rather, the analysis suggests that this group of people died off more than 20,000 years ago, leaving no modern descendants. “What we see here is a much more complex story than what we believed was the case,” Willerslev tells The Guardian. 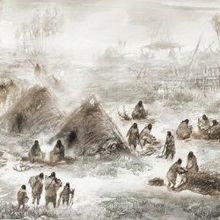 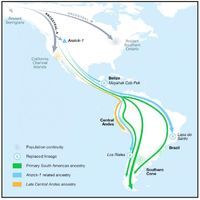