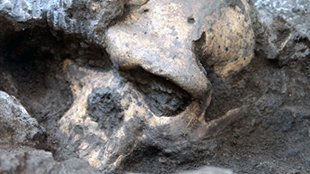 The new skull found at DmanisiGEORGIAN NATIONAL MUSEUMScientists have unearthed the first ever completely preserved skull of an adult hominin from the Paleolithic era—spanning approximately 2.6 million to 10,000 years ago. The specimen, described in a paper published online today (October 17) in Science, together with other skull specimens found at the same site in Dmanisi, Georgia, indicate that the early evolving lineage of Homo was still relatively primitive when it left Africa, and also that it exhibited considerable variation between members of the same species.

“This is going to be a classic paper in paleoanthropology,” said Tim White, a professor at the University of California, Berkeley, who was not involved in the work. “The reason for that is not so much the cranium itself . . . but rather the entire package of evidence from this locality,” he said. The new skull is clearly the...

The jaw of the skull was found in 2000. Its matching cranium was discovered five years later. It was easy to tell the parts were from the same individual, however, because “the teeth match with each other,” said Christoph Zollikofer, a professor at the Anthropological Institute at the University of Zurich, who led the study. “They are like fingerprints,” he said.

Other Homo skulls have been found before, but have been damaged, incomplete, or had other problems “that prevented paleoanthropologists from knowing how a normal adult skull of an early Homo would look,” said Zollikofer. For example, two other well-preserved skulls were also found at the Dmanisi site, but one was from an adolescent and the other was elderly. “In juveniles, the face still has to grow quite a bit,” explained Zollikofer, while the elderly specimen’s jaw morphology had been strongly altered by bone resorption following loss of the teeth.

“That’s the very special thing about [the new skull]: everything is there, every tooth is preserved, all the minutest details of the morphology are there,” Zollikofer said.

Based on the features of the skull, it is thought to have been a male with large cheek bones, teeth, and jaws, but a small brain. “It was really interesting to see this specific combination of a small brain and a big face,” said Zollikofer, “because this is something that has never been found [before].” Indeed, fossils of big jaw bones and small craniums would previously have been assigned to different Homo species, he said. “Now we see it clearly in one single individual.”

The other striking indication about the small brain is that, contrary to previous consensus, it suggests “it was not expansion of the brain that allowed [Homo’s] geographic expansion in range,” said White. “What the Dmanisi material is showing us is that the first hominins out of Africa . . . were clearly very early in the lineage,” said Foley.

The newly described skull also expands the morphological variability of the specimens found at the Dmanisi site—some of which appear less primitive. Despite this variability, Zollikofer believes all the specimens are members of the same species. That would be “the most parsimonious explanation,” agreed Foley, because the remains were deposited together in one place at one time.

In support of the single species theory, Zollikofer found that the morphological variability within the Dmanisi specimens was in fact no more than that found in modern humans, or chimps, or bonobos. He suggested that other hominin fossils previously classified as separate species—such as H. habilis, H. rudolfensis, and H. erectus—should be re-examined.

“We urge for a change in perspective, because what has happened in the last ten years is that people tried to divide—they tried to show species diversity—and what we try to show now is diversity, but within one single evolving species,” Zollikofer said.