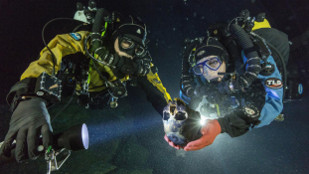 Divers transport Hoyo Negro skull.PAUL NICKLEN/NATIONAL GEOGRAPICThe uncovering of an almost completely intact, 12,000-year-old skeleton of a 15- or 16-year-old girl—found in an underwater cave near Mexico—lends support to the idea that modern Native Americans originated from an ancient population that came from Beringia, not from distinct migrations of peoples from different parts of Asia and Europe. The discovery of this remarkably well-preserved specimen by divers has, for the first time, allowed researchers to perform both genetic and morphological analyses from a single, ancient individual. Washington-based archaeologist and paleontologist James Chatters and his colleagues today (May 15) published in Science their analysis of the ancient individual.

The well-preserved ancient skeleton, which includes facial bones and teeth, helps to resolve the debate among scientists of whether ancient Native Americans arrived in the Americas from Asia through Beringia in a single migration sometime between 26,000 and 14,000 years ago. Genetic...

“With this specimen, we have evidence that the physical differences between the ancient and modern Americans came about through evolution that occurred after the Beringia migration,” said Chatters.

The teenage girl, who the researchers named Naia, is thought to have lived between 12,000 and 13,000 years ago. “This skeleton is one of the oldest to be found in America,” said Theodore Schurr, a biological anthropologist specializing in human evolutionary genetics at the University of Pennsylvania who was not involved in the work. “This analysis provides a perspective on both the morphological and genetic diversity of the Americas at an important time point.”

According to Chatters, there are only five other ancient-human specimens discovered in the Americas that are at least 12,000 years old. “It’s a very small club,” he said. Two of these also had intact skulls, but Naia is the only one yet found with near-full set of teeth, which are helpful for analyzing ancestry.

The skull and teeth of the ancient teenage girl are thought to be representative of those of the earliest Americans, and are unlike those of modern Native Americans—findings consistent with previously found specimens of the same age.

But sequencing Naia’s maternally inherited mitochondrial DNA (mtDNA), extracted from one of her molars, the researchers uncovered evidence to suggest that she belongs to the sub-haplogroup D1—a genetic lineage that only occurs in the Americas but originated in Asia. This particular lineage is thought to have risen in Beringia after the ancient Beringian population separated from other Asian populations. And the team’s genetic analysis on Naia did not uncover evidence of European, Australian, or southern Asian ancestry.

“That we see the D1 haplogroup from this ancient skeleton indicates that this girl’s maternal ancestry traces to the same source population as that of modern Native Americans,” said molecular anthropologist Deborah Bolnick at the University of Texas at Austin. “About 11 percent of Native Americans today exhibit this haplogroup.”

The recent analysis of the 12,600-year-old “Anzick-1” skeleton found in central Montana also showed that early Native Americans descended from an ancient Asian population from Beringia. While researchers sequenced the entire genome of Anzick-1, his facial skeleton was not intact—the child, estimated to be about 12 to 18 months old when he died, would have been too young for facial morphology comparison, said Chatters.

Unlike Anzick-1, Naia was uncovered on accident. A group of divers, which included study coauthor Alberto Nava Blank from the Bay Area Underwater Explorers in California, were exploring an underwater cave called Hoyo Negro in the Yucatán Peninsula when they found her bones. The divers reported the site to Mexico’s National Institute of Anthropology and History, which spearheaded the analysis. Besides Naia, the explorers also identified more than 20 animals including seven cave bears, Saber Tooth tigers, and giant ground sloths. “This project had everything you could ask for in science—excitement, danger, beauty—and even extinct animal bones!” said Chatters.

“This was brilliant science,” said prehistoric archaeologist Dennis Jenkins of the University of Oregon, who was not involved in the work. “The way [the team] used radiocarbon dating and mineral formation analysis to establish the skeleton’s age was very innovative.”

The researchers are now working to sequence Naia’s nuclear genome and to extract additional DNA from another tooth to confirm their genetic findings.