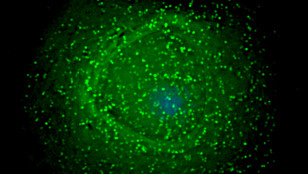 Fragments of ancient viruses buried in the genomes of mammals and other vertebrates typically lay dormant but can awaken in immune-compromised mice and may cause cancers, according to a new study published today (October 24) in Nature. The trigger for the resurrection of such viruses, known as endogenous retroviruses (ERVs), could be other microbes, which are unfettered in such immune-compromised mice.

“This study provides a link between exposure to other microbes—commensals or even pathogens—and activation of endogenous retroviruses, which in mice leads to cancer,” said senior author George Kassiotis, an immunologist at The National Institute of Medical Research in the United Kingdom. But other researchers are skeptical of the connection.

ERVs are the broken remains of ancient retroviral infections, in which fragments of viral RNA are reverse-transcribed into DNA and become part of the host genome, where they collect mutations that prevent...

Though researchers had suspected that ERVs could reactivate and recombine, the study provides direct evidence of such an event, says immunologist David Markovitz of the University of Michigan, who was not involved with the study. “It’s extremely interesting that the mice activate or reactive their expression of ERVs in the absence of antibodies,” he said, “and that [the researchers] saw corrections in mutated genes that actually leads to replication of virus.”

Modern retroviruses have long been associated with the development of cancers, and Kassiotis’s team thought the ancient viruses could be similarly dangerous. Indeed, mice with infectious, recombined retroviruses developed significantly more tumors in their spleens and thymus, where levels of retroviral expression were high.

But, despite this link between ancient viruses and active cancer, some retroviral experts are more intrigued by what the authors think is the cause of viral reactivation.  “The interesting wrinkle on this study is the apparent importance of the immunodeficiency,” sad virologist John Coffin, of Tufts University, who was not involved in the study.

Previous data have indicated that signals from bacteria in the mouse gut could lead to increased EVR expression, but that antibodies usually block those microbial signals. Thus, Kassiotis’s team hypothesized that in the absence of such antibodies in their immunodeficient mice, invading microbes could activate ERV expression.

Indeed, when placed in germ-free environments, or fed acidic water that would limit their gut microbes, the immune-deficient mice experienced less viral reactivation.

“These findings are intriguing, but raise questions” about the mechanism for reactivation, wrote oncologists Reiner Strick and Pamela Strissel of University of Erlangen, Germany, in a joint statement to The Scientist.

Markovitz agreed. Many factors influence and are influenced by the microflora of the gut, so it’s unclear whether changes in the microflora is the cause of viral reactivation or if it's merely a coincidence, he said. “Thinking [the trigger is] the microbiome is attractive, but there’s no evidence for that.”

Still, the study provides a starting point to explore the interplay between gut microbes and retroviruses that lead to cancers in mice and other organisms. If true, Kassiotis speculated, the implications could be far-reaching. “You could imagine a link between persistent infection or inflammation or even diet with the propensity to develop certain leukemias,” he said.

But the link to human health is even further way, cautions geneticist Dixie Mager of the University of British Columbia, Canada, who was not involved in the study. There are specific features of the mouse model that make it possible for these viruses to recombine in mice that aren’t present in humans, she explains. “It is therefore extremely unlikely that ‘active’ human ERVs could be generated by similar mechanisms in immune compromised individuals.”