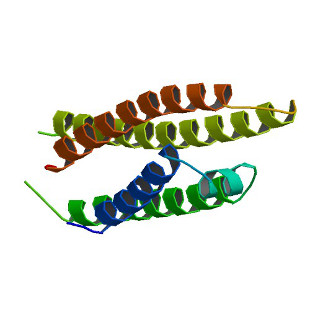 Apolipoprotein EWIKIMEDIA, PROTEIN DATA BANK/J. DONG ET AL.The allele apolipoprotein E ε4 (APOE ε4) is the greatest genetic risk factor for Alzheimer’s disease (AD), but the role of the ApoE4 protein in AD has long been elusive. Turns out, ApoE4 may function as a transcription factor, according to a study published today (January 20) in the The Journal of Neuroscience, led by investigators at the Buck Institute for Aging Research and the University of California, Los Angeles (UCLA).

Study coauthors Rammohan Rao of the Buck Institute for Research on Aging and Dale Bredesen of the Buck Institute and UCLA “have provided evidence for a novel—in fact, radical—idea: that ApoE somehow gains access to the nucleosol and acts as a conventional transcription factor, influencing the expression of a large number of genes,” Steven Barger, who studies neurodegenerative disease at the University of Arkansas for Medical Sciences and...

Robert Mahley, a pioneer of ApoE research who also was not involved in the work, called the paper’s conclusions “very, very exciting.”

ApoE, a protein that is secreted from cells via vesicles, is known not only for its roles in neurodegenerative diseases but also for its functions in lipid metabolism and transport. Previously, other researchers reported that ApoE4 seemed to reduce the clearance of amyloid-β, the protein that clumps together to form the hallmark plaques of AD, from the brain in a mouse model. Earlier research from the Buck Institute group also found that ApoE4 reduced expression of the antiaging protein, sirtuin 1 (SIRT1). SIRT1, in turn, was thought to reduce the accumulation of amyloid-β by activating another protein—a possible mechanism behind the reduced amyloid-β clearance observed in AD. The researchers wondered if ApoE4 might interact with SIRT1 at the transcriptional level.

Using surface plasmon resonance experiments, an in vitro method for determining molecular binding partners, the researchers found that both ApoE4 and ApoE3—an ApoE isoform associated with a lower risk of AD compared to ApoE4—bound the SIRT1 promoter. The researchers also examined the subcellular localization of ApoE proteins in human neuroblastoma cells transfected with either ApoE3 or ApoE4, detecting the molecules in both the cytoplasm and the nucleus.

“[It is] somewhat surprising that the full-length ApoE does enter the cytosol, and more surprising is that it enters the nucleus,” said Mahley, president emeritus of the Gladstone Institutes and a professor at the University of California, San Francisco.

Mahley added that he was surprised to see that ApoE had left the secretory pathway; his research had found that only fragments of ApoE entered the cytosol (he had not detected these fragments in the nucleus). “This has been an area of discussion for many years, as to whether there is the possibility of this translocation of ApoE from the secretory pathway, from the ER [endoplasmic reticulum] and the Golgi, where clearly it is predominantly located,” he continued. “So that’s an area of great interest.”

Rao and Bredesen next used genome-wide chromatin immunoprecipitation sequencing (ChIP-seq) to determine where in the genome the two ApoE isoforms bound. The researchers found that the AD risk factor ApoE4 bound to promoters of 1,700 genes that ApoE3 did not.

Of those genes, the researchers found 76 that have possible roles in AD. In addition to SIRT1, they identified three candidate genes that ApoE4 seems to repress: two are anti-inflammatory, one is antiapoptotic. The results suggest that ApoE4 may contribute to AD in part by promoting inflammation and apoptosis, said Rao.

Barger said he found the possible connection to inflammation intriguing, but noted that “the hypothesis does not all fit together cleanly.” That’s because ApoE4 and ApoE3 were both found to translocate to the nucleus and to bind the SIRT1 promoter, making it difficult to evidence a unique role for ApoE4.

“More than anything else, what my studies are showing is that . . . you can’t have a monotherapy [for AD],” said Rao. “Because if you have a monotherapy, the question is which one [of the many genes involved] would you target?”