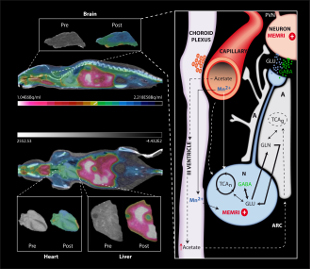 Acetate, a molecule produced from fermentation of dietary fiber in the colon, leads to increase anorectic signaling in the hypothalamusCERAN AND PEREZResearchers have long realized that consuming a fiber-rich diet can suppress appetite and reduce food intake in mice and humans alike, a phenomenon previously attributed to the release of gut hormones. Writing in Nature Communications today (April 29), Imperial College London’s Gary Frost and his colleagues showed that small amounts of the short-chain fatty acid acetate, released as a result of the fermentation of dietary fiber in the mouse gut , accumulates within certain neurons in the animal’s hypothalamus, a part of the brain that helps regulate hunger.

For the first time, the researchers have traced “a link between fermentation in the lower part of the gut—the colon—with activity in the brain,” said Patrice Cani, who co-leads the Metabolism and Nutrition Research Group at Université Catholique...

Frost’s team was among the many that had been focusing on gut hormones, such as peptide YY and glucagon-like peptide-1, finding that these could directly affect neurons within the hunger-regulating hypothalamus. But using manganese-enhanced MRI (MEMRI) the researchers found “unusual brain signaling” in appetite-suppressed mice fed a fiber-rich diet, Frost said. “You’d usually expect that the actual activation levels [of hypothalamic neurons] to fall if the animal’s appetite is suppressed, but they actually go up.”

Frost’s group and others had previously studied several short-chain fatty acids produced through fiber fermentation in the gut and implicated in brain-based appetite regulation. Fatty acids propionate or butyrate have been well-studied, for example, but acetate—the most abundant short-chain fatty acid produced in the colon—has been “neglected so far—at least in the context of appetite regulation,” said Cani.

To investigate the role of acetate in appetite suppression, Frost and his colleagues used 13Carbon labeling to image the fatty acid from the mouse gut within the brain, and found that around 5 percent of the acetate was preferentially taken up by the hypothalamus. (Most acetate is processed within the colon itself, or by the liver—through a well-studied process related to the metabolism of alcohol.) They also showed that colonic administration of acetate was associated with reduced appetite and food intake in mice.

“Gary [Frost’s team] already demonstrated the in-brain activity of neurons involved in food intake,” said Cani, referring to a 2007 PLOS ONE paper, “but he couldn’t at that time really link the molecules sending the signals from the gut.” Little did anyone realize that “acetate was one of those molecules,” he added.

Of course, the biggest question at this point is whether acetate has similar appetite-suppressing effects in humans. “Currently, in western society, we probably consume somewhere between 12 to 14 grams of dietary fiber per day,” said Frost. “Our work [in mice] suggests that to reliably see appetite-suppressive effects, you’d need around 30 to 35 grams—nearly three times what we normally eat.”

He added that his team is now also working to determine whether targeted delivery of acetate could be a viable therapeutic option for conditions like obesity down the line.