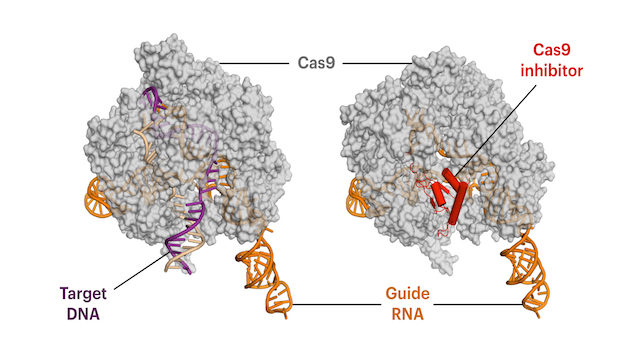 “CRISPRs have been recognized as bacterial immune systems for some time, and of course, one of the pretty common themes in biology is that if something develops a weapon, the target is going to develop a defense,” says study coauthor Jacob Corn, a professor of biochemistry and biophysics at the University of California, Berkeley. “It turns out that . . . the phages have evolved ways to fight off the CRISPR systems, and that’s these anti-CRISPR proteins.”

To study the mechanism behind one of these anti-CRISPR proteins, AcrIIA4, which was co-discovered by Corn’s collaborator, Joseph...

Through a multi-lab effort, researchers discovered that this anti-CRISPR protein worked by attaching to a pocket on the Cas9 enzyme where DNA typically binds, preventing it from accessing DNA.

The team also examined the effectiveness of this system for gene editing in human cells using guide RNAs for the gene vascular endothelial growth factor A, which is notorious for its off-target effects, and the gene for haemoglobin, which Corn’s lab is using to investigate ways to correct the mutations behind sickle cell disease.

This analysis revealed that by adjusting the timing of when AcrIIA4 or Cas9 was added to an assay, the researchers could preferentially block off-target effects. “We found that if you pre-add AcrIIA4 and add Cas9 later, you’ve completely blocked gene editing,” Corn says. “But if you delay it by a little bit, six hours or so, then there’s really not a huge hit to on-target activity.”

“Though the work and the results were very impressive and important, they weren’t particularly surprising,” says Erik Sontheimer, a professor in the University of Massachusetts’s RNA Therapeutics Institute. Sontheimer was not involved in the study, but he is a cofounder of Intellia Therapeutics, alongside study coauthor Jennifer Doudna of the University of California, Berkeley, and the company is using an anti-CRISPR protein that Sontheimer co-discovered (not AcrIIA4).. “This is a very logical way for an anti-CRISPR protein to act. [This] mechanism . . . has been well established previously in other systems, and DNA mimicry by a phage nuclease inhibitor protein has been observed before.”

Alan Davidson, a molecular geneticist at the University of Toronto who did not take part in the work, but is also collaborating with some of the study’s authors, points out that two very similar papers were recently published in Nature this April and Molecular Cell in June. “There’s basically the same structure, the same proteins, and the same conclusions,” says Davidson, who was Bondy-Demony’s graduate advisor and whose name is on a patent, along with Sontheimer, for three other anti-CRISPR compounds. “I think the only [difference] is the Science Advances paper has some data about genome editing, [showing that] expressing the anti-CRISPR while you’re genome editing could cut down the off-target effects.”

The rapid succession of these papers illustrates that “it’s a very competitive field,” Davidson adds. “To me, the most outstanding aspect of these papers, particularly the one that came out in Nature, was the tremendous speed [of the work].” Considering the initial discoveries of anti-CRISPR proteins were only published last December, he says, these studies were conducted at an incredibly rapid pace.

These anti-CRISPR proteins are likely to be a useful genetics, and perhaps clinical, tool. Not only will these proteins help reduce off-target effects, they could also be an effective way to control on-target effects, Corn says. For example, several methods of gene therapy may leave active Cas9 in patient cells, which clinicians would want to turn off. “It’s absolutely critical to have an on-switch for gene-editing, but it’s just as important to have an off switch,” he adds.

Before any of that happens, however, “there’s a lot of important efficacy and safety [investigations] that still need to be done,” Corn says. For example, scientists need to understand what the human immune response will be to these anti-CRISPR proteins, because they come from bacterial viruses. “We’re purely in research mode with the anti-CRISPR proteins,” he adds. “Who knows what other tools are out there, waiting for us to find.”