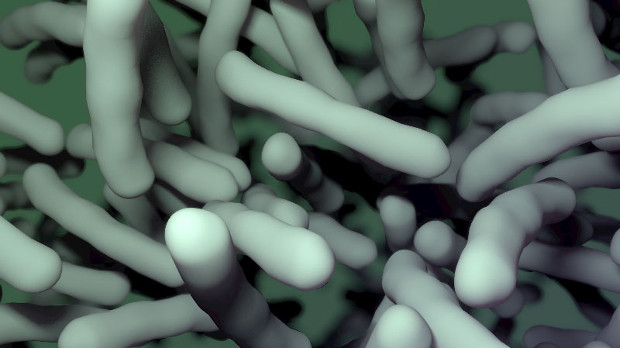 V. ALTOUNIAN, SCIENCE TRANSLATIONAL MEDICINEBacteria that have evolved resistance to ß-lactam antibiotics can be rendered susceptible once again if the drugs are combined with newly identified small molecule adjuvants called tarocins. Researchers at the pharmaceutical company Merck announced their discovery in a Science paper today (March 9), showing that a cocktail of ß-lactam antibiotic and tarocin could successfully treat mice infected with a normally resistant strain of Staphylococcus aureus.

The authors found “an interesting way to resensitize resistant bacteria to agents that are absolutely fantastic when they work,” said medicinal chemist Amy Anderson of the University of Connecticut who was not involved in the research. “ß-lactams are . . . the go-to antibiotics and being able to get that sensitivity back is absolutely critical.”

ß-lactam antibiotics, which include penicillins such as methicillin, kill bacteria by targeting enzymes that are necessary for producing peptidoglycan—the major component of the bugs’...

MRSA and MRSE are both major causes of difficult-to-treat infections, particularly in hospitals, with MRSA being the second most common cause of death from drug-resistant bacteria. Indeed, the US Centers for Disease Control and Prevention has categorized MRSA as a serious threat.

Recent research has shown that inhibiting the synthesis of teichoic acid—another cell wall component—can restore ß-lactam sensitivity to drug-resistant S. aureus. However, inhibitors of the teichoic acid pathway identified to date “either have eukaryotic toxicity or lack potency,” said microbiologist and immunologist Suzanne Walker of Harvard Medical School who also was not involved in the project.

Merck’s Terry Roemer and colleagues therefore carried out a screen of 2.8 million small molecules to try to find safe and effective techoic acid inhibitors. The researchers found two structurally unrelated molecules, which inhibit an enzyme responsible for the first step in teichoic acid synthesis, TarO, naming the compounds tarocin A and B.

The team showed that combining either of the molecules with a ß-lactam antibiotic could suppress growth of both MRSA and MRSE in vitro, and that neither of the compounds were toxic to human cells. The team then created an improved derivative of the more potent of the two molecules, tarocin A, and showed that it could restore ß-lactam susceptibility to 82 percent of MRSA samples and 77 percent of MRSE samples isolated from patients. They also showed that mice infected with MRSA could be effectively treated with a combination of ß-lactam and tarocin A with no apparent adverse effects. Treatment with either the antibiotic or tarocin A alone, on the other hand, failed to clear the infections.

That the tarocins lack activity when used alone was not by chance, but design, Roemer explained. The team chose to focus their efforts targeting a noncritical part of the teichoic acid pathway. Such an approach is unusual, said Anderson, explaining that normally “everybody is looking to kill the bacteria.” But, Roemer said, it has its advantages. For one, “it turns out that clinical trials [are] much more straightforward if the adjuvant is nonbioactive,” he said. Compared with an entirely new antibiotic that itself kills bugs, the regulatory path to clinical development of an inactive adjuvant is “faster, easier and less costly,” Roemer added.

Another benefit of targeting nonessential pathways, Roemer noted, is that it provides scientists with options. “It opens up more targets and new chemical space to consider,” he told The Scientist. “You just have to pair it with an existing antibiotic.”