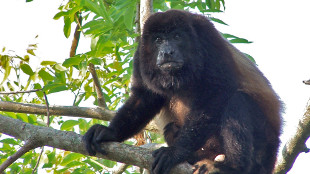 Howler monkeys are one of seven species of Mexican wildlife researchers found harboring antibiotic-resistant bacteria in a recent study.JURGI CRISTÓBAL-AZKARATE

Wildlife biologist Jurgi Cristóbal-Azkarate is used to surprise encounters in the remote Mexican jungles he explores for science. But he never expected to find superbugs—bacteria that have developed a resistance to antibiotic medicines—in the feces of wild howler monkeys near Veracruz. These animals rarely see humans, much less drugs.

“I thought, how is this even possible? A monkey can’t have contact with that,” said Cristóbal-Azkarate, a lecturer at the University of Cambridge.

Antibiotic resistance is usually regarded as a threat in places like crowded big-city hospitals or factory-sized feedlots crammed with animals fattened for slaughter—the kinds of places where infection-fighting medicines are heavily used, and sometimes overused, giving microbes ample opportunity to evolve resistance to the drugs. But as Cristóbal-Azkarate’s 2014 Veracruz discovery showed, resistant...

In a study published this September in PLOS ONE, Cristóbal-Azkarate and a team of researchers from Cambridge, the University of Washington, and Fundación Lusara in Mexico City reported that they had detected an abundance of bacteria resistant to clinical antibiotics in the feces of seven wild species in the Veracruz region of southeast Mexico. In addition to howler monkeys, the superbugs were present in spider monkeys, tapirs, jaguars, a puma, a dwarf leopard, and jaguarundis—small wildcats native to the area. Moreover, monkeys that lived far from humans were just as likely to harbor drug-resistant bacteria as those that were closer to people.

While the discovery surprised Cristóbal-Azkarate, who primarily studies hormonal influences on primates, other researchers have documented antibiotic resistance in animals all over the world—from wild rodents in Britain to iguanas in the Galapagos Islands. “Resistance is everywhere.  It is found in places that are ‘pristine’ and in places that are ‘polluted,’” said Randall Singer, an epidemiologist at University of Minnesota.

And perhaps it should be no surprise at all: most antibiotics come from bacteria and fungi, to which bacteria have been exposed for millions of years. But in Cristóbal-Azkarate’s study, some isolated bacteria were even resistant to relatively new, synthetic antibiotics such as fluoroquinolones, suggesting that resistance had spread from human-populated areas.

Scientists still don’t have a clear sense of how drug-resistant bacteria have managed to spread so far from the places where such antibiotics are prescribed, however. It’s unlikely that the Mexican monkeys came into direct contact with these drugs. More likely, the animals came into contact with human or animal waste that carried the resistant bacteria, having traveled through water or by way of migratory birds. While these bacteria do not seem to be harming their animal hosts, some researchers worry that the superbugs could mutate further and then return to human civilization in unfamiliar forms that could be “difficult, if not impossible,” to treat, said Tony Goldberg, an epidemiologist at the University of Wisconsin.

Researchers know that antibiotic-resistant pathogens like Salmonella or E. coli can transfer from farmers to livestock and vice versa, but there’s little evidence to similarly connect humans and wildlife.

“If you live in an environment connected in any way with wildlife, then you will acquire their bacteria, and they will acquire yours. This is the ecology of resistance,” said Singer, who has been studying infectious diseases for 20 years.

According to Cristóbal-Azkarate’s collaborator Carlos Amábile-Cuevas, a microbiologist at Fundación Lusara, “it’s far-fetched to have bacteria [from] monkeys actually cause infections in humans.”

Amábile-Cuevas is looking into genetic markers of resistance in the bacteria from these samples. For now, he said, “we are completely in the dark [about] which kind of processes led to this type of resistance.”

J. Cristóbal-Azkarate et al., “Resistance to antibiotics of clinical relevance in the fecal microbiota of Mexican wildlife,” PLOS ONE, doi:10.1371/journal.pone.0107719, 2014.

This article is provided by Scienceline, a project of New York University’s Science, Health and Environmental Reporting Program.