A study of people in Sierra Leone suggests that the virus can lie in hiding from the immune system before re-emerging later and sparking a new response—although researchers didn’t examine whether this could make people infectious again.

ABOVE: An Ebola survivor donates plasma at the blood bank at Connaught Hospital in Freetown, Sierra Leone.
JANET SCOTT

Asubstantial proportion of people who survive Ebola may produce a spike in antibody levels more than six months after they’ve recovered from the disease, according to a study published today (January 27) in Nature.

Analyzing multiple plasma samples from 51 survivors of the West African outbreak of 2013–2016, researchers found that the levels of virus-neutralizing antibodies declined, as expected, in the days and weeks following recovery. But these levels shot up again in some survivors around the 200- to 300-day mark before declining again—evidence that Ebola virus may be lingering inside their bodies and re-emerging to trigger immune defenses, the researchers conclude in their paper.

“The idea that there can be a source of virus that could restimulate the immune system isn’t surprising” in itself, says Carl Davis, an immunologist at Emory University who was not involved in the work. “But the fact that they were seeing this so frequently and to such a big magnitude is really pretty shocking.”

Clinicians should be aware that this phenomenon can occur.

Since the West African epidemic, which claimed the lives of more than 11,000 people, there have been multiple reports of viral persistence in survivors. One 2016 study, for example, reported that 24 of 429 men in Liberia who had been infected with Ebola tested positive for viral RNA in their semen more than 12 months after they’d recovered from the disease, with one testing positive more than a year and a half after completing treatment. Viral RNA isn’t necessarily evidence of infectious virus, but based on genomic and epidemiological data, researchers suspect that Ebola can be transmitted sexually by men several months after infection.

Taking a different approach, University of Liverpool virologists Georgios Pollakis, Bill Paxton, and colleagues focused in the current study on measuring survivors’ immune responses to Ebola virus. Specifically, they analyzed the levels of virus-neutralizing antibodies in 115 healthy people in Sierra Leone who had recovered from prior infections and had volunteered to provide convalescent plasma to be used as an experimental therapy for other patients.

Using a combination of immunological assays, including treating some of the plasma samples with synthetic viral particles bearing specific Ebola virus proteins, the researchers monitored antibody levels between 30 and 500 days after participants were discharged from Ebola treatment units. Among the 51 participants who provided more than one sample, the researchers found that, on the whole, antibody levels seemed to decline following a person’s recovery, as expected. However, in more than half of those participants, the team detected an increase in antibody levels between about six months and a year post-recovery. 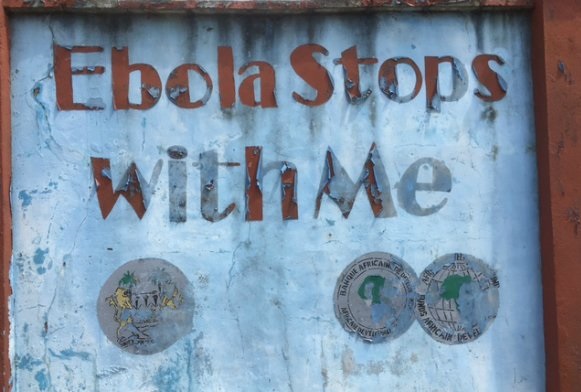 One of many displays raising public awareness in Freetown, Sierra Leone
GEORGIOS POLLAKIS

Such an antibody spike is unlikely to be the result of people receiving Ebola vaccinations during the study, Pollakis says. Plasma donors reported to clinicians that they hadn’t received vaccines. If they had been immunized, the researchers would have expected to see increased levels of antibodies only against the proteins used in the vaccine; instead, their assays revealed increased levels of antibodies against various viral proteins.

Nor is the observation likely to be due to survivors being reinfected by other people, Pollakis adds. The samples were negative for viral RNA, and some of the observed antibody increases occurred after Sierra Leone had stopped reporting new Ebola cases, he explains.

Instead, the researchers hypothesize that the spike is the result of the immune system re-encountering viral antigens already within the body. This could happen if Ebola virus hides in so-called immune-privileged sites such as the eye, the reproductive tract, or the central nervous system—those regions typically better shielded from the immune system than other areas of the body—and then reappears once antibody levels have fallen below a certain threshold.

The findings suggest “that actually, a much larger proportion of individuals than were previously thought carry some form of viral antigens, if not the whole virus,” Pollakis says, “and that as the antibodies decline and reach a nadir around two hundred, two hundred and fifty days, the antigen gets the chance to come back in some form and stimulate the immune system again.”

Nathalie MacDermott, an academic clinical lecturer at King’s College London who participated in the medical response to Ebola in West Africa and was not involved in the study, says that the findings seem to confirm something that has long been suggested by other investigations of Ebola survivors, although “the sample size is relatively small.” She adds that it will be important to understand what makes some people more susceptible to a recurrence of the virus than others, and to gather more detailed data on how long recurrent virus may stick around in survivors once it’s reappeared.

In more than half of those participants, the team detected an increase in antibody levels between about six months and a year post-recovery.

Davis, who coauthored a 2019 study of B cell responses to Ebola in four survivors treated in the US, notes that it would be interesting to see if the same antibody patterns are present in a more diverse patient population. People selected as potential plasma donors might not be representative of all Ebola survivors—for instance, the authors speculate in their paper that donors are less likely to have viral recurrence, because they have to be healthy to take part in the study and therefore should be better at suppressing Ebola virus than the general population of survivors. But Davis notes that this relationship hasn't been demonstrated. He adds that further work could investigate immune-cell responses in addition to the antibody levels measurable in plasma samples.

Pollakis tells The Scientist that the team wants to encourage vaccination programs for Ebola survivors, which would allow researchers to study immune responses in a more controlled and in-depth way, as well as boost immune protection in these patients. MacDermott notes that it would be important to work out whether recurrent virus in an individual is likely to be transmissible to others or likely to cause symptomatic illness in the survivor when considering the costs and benefits of vaccination.

Paxton says that survivors of the outbreak should be monitored as a precaution against viral re-emergence as time increases since the West African epidemic and antibody levels keep decreasing in the population. “Clinicians should be aware that this phenomenon can occur,” he says. Although it’s unknown if viral recurrence in individuals could result in transmission to other people, those individuals at least may benefit from treatment, he adds. “You need good clinical surveillance and clinical management.”