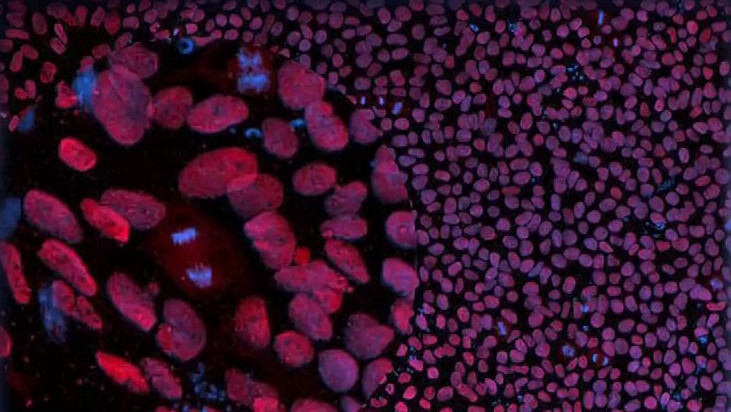 Illustration of a cancer stem cellVIMEO, LEE HEALTHCancer stem cells (CSCs) are thought to enable tumor evolution—they’re genomically unstable, primed for metastasis, and difficult to destroy. The stem cell theory of cancer suggests that conventional chemotherapy and radiation therapy eradicate only non-CSC cancer cells, but leave behind CSCs that can sustain the cancer.

In a study published last week (March 8) in Science Translational Medicine, scientists have described a novel antibody therapy that may be able to both shrink tumors and target CSCs. The authors described a two-in-one antibody, called CT16, which appears to inhibit the epidermal growth factor receptor (EGFR) and Notch pathways, both of which are implicated in cancer cell growth. The team also tested the antibody in mice, confirming their in vitro findings.

“We created a dual targeting antibody called CT16, which can recognize both the EGFR and Notch,” coauthor Shi Hu of the...

Hu and colleagues first developed CT16 and tested it on human non-small cell lung cancer (NSCLC) cells in vitro. They found that the antibody decreased the number of CSCs in the sample while rendering the remaining cells more susceptible to radiation therapy. CT16 also appeared to play a role in fighting the tumor itself: the researchers reported that CT16 was 10 times more effective than radiation therapy at killing all cancer cells.

The researchers demonstrated that CT16 works by inhibiting EGFR. But, unlike most EGFR inhibitors, cancer cells are unlikely to become resistant to the antibody because it simultaneously inhibits the Notch pathway, a prime route for resistance. Hu speculated that “the anti-EGFR arm of CT16 may recognize the EGFR in other cell subpopulations, and the anti-Notch arm may recognize the surface receptor of CSCs, therefore passively recruiting EGFR expressing cells to CSCs.”

Hu and colleagues also tested their antibody in a mouse model of NSCLC. They found that CT16 did not significantly impact tumors that were already resistant to EGFR inhibitors. But in all other cases, the researchers found their antibody was effective at killing cancer cells and, in cases, more so than similar antibody therapies they tested.

“Our data suggested that dual targeting of EGFR and Notch signaling might prevent or delay acquired resistance to EGFR inhibitors, but not overcome established acquired resistance,” coauthor Changhai Lei, also of the Second Military Medical University, wrote in an email. “We think response to EGFR inhibitors is the precondition of CT16 treatment.”

Carla Kim, an expert in stem cells, cancer, and lung biology at Harvard Medical School who was not involved in the study, acknowledged the importance of the research. “One nice thing about this is that they’re studying EGFR-mutant tumors,” she said. “There is a very well-defined group of lung cancer patients for which this is still a need.”

Kim cautioned, however, that because of the study’s design, the antibody’s therapeutic potential could be limited. For one, she noted, the researchers treated NSCLC cells placed under the animals’ skin. “These are lung tumors not growing in the lung,” she said. “We don’t completely understand how the differences in that microenvironment will impact therapy response.” Kim added that most of the experiments were done with cell populations derived from established cancer cell lines, rather than the more rigorous approach of analyzing cells from primary lung tumor samples.

Further, said Kim, it’s unclear whether a group of cells the team examined, CD133+ cells, are in fact CSCs. “One might argue that there is no rigorous evidence in vivo that CD133+ cells are absolutely cancer stem cells,” she said. “There’s an effect on tumor growth which is really the most important thing, but what they’re seeing may not be a specific effect on CSCs. It really depends on how much weight one puts on whether they’ve really IDed cancer stem cells.”

Correctly identifying CSCs is “always a concern,” said Alejandro Wolf-Yadlin, an assistant professor of genome sciences at the University of Washington. “You never know exactly what you’re dealing with. It’s a problem with this paper and with any other paper that wants to do this kind of work.”

“Our in vivo efficacy models may not fully recapitulate human NSCLC, and the data are from a small number of animals. Moreover, the mechanisms responsible for these therapeutic effects of antibodies against CSC are currently not well characterized,” Lei wrote. “We are now working on these issues.”

Nonetheless, Wolf-Yadlin said the approach shows promise. “I think this is something that could translate into a therapy,” he said. “Dual antibodies can be useful. If these antibodies can make sure the stem cells are killed along with the primary tumor cells, you have a good chance of the tumor not coming back. This is definitely a step in the right direction.”

Kim is similarly optimistic about the future of CSC-targeting therapies. “There’s plenty of evidence that either stem cells or stem-like cells in tumors are relying on pathways that, in some cases, a normal progenitor cell utilizes,” she said. “By studying cancer stem cells, we might be able to uncover what those unique vulnerabilities are.”