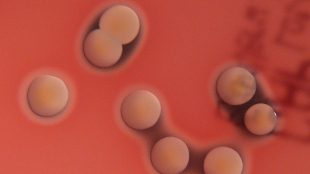 Staphylococcus aureus on blood agarWIKIMEDIA, HANSNDuring microbial infections, the battle between a drug and a pathogen determines whether a patient will be cured. When extending the metaphor of drug resistance as an arms race between bacteria and antibiotics, however, the bacterial genome is the true battleground.

When faced with antibiotics, bacteria employ several evasive tactics. These include switching genetic sequences to mutate target sites on proteins and changing gene-expression patterns. Less drug-specific mechanisms, such as thickening cell walls or increasing the expression of efflux pumps (which can quickly clear drugs), are also common.

Using computational approaches and laboratory experiments, scientists are now trying to model such molecular defenses in an effort to eventually make drugs that are less likely to incite antibiotic resistance.

Efforts to make new antibiotics that are effective against resistance—yet less likely to incite their own—have been in place for several years. “But the push...

So far, most such studies have relied on one of two approaches: experimental evolution, where bacteria are exposed to antimicrobials and their genomes tracked for signs of change, or in silico approaches, where gene expression and protein-design algorithms are used to predict adaptive changes.

In a PNAS study published last month (January 20), Anderson and her colleagues tested whether the single nucleotide polymorphisms (SNPs) required for Staphylococcus aureus to grow resistant to a specific folate metabolism inhibitor could be computationally predicted. Using a protein-design algorithm, the researchers predicted mutations in the bacterial dihydrofolate reductase (DHFR) enzyme that would confer resistance to this drug without hindering the enzyme’s normal functions. In parallel, they conducted experiments to observe which mutations actually arose within bacterial genomes when S. aureus were experimentally exposed to the same inhibitor. When they compared the predicted mutations with those discovered in the lab, two of the top four were identical. “Our idea was that we could predict [these mutations] in silico ahead of time, before the inhibitors that are deployed are even used in resistance selection,” said study coauthor Bruce Donald of Duke University who conducted the computational analysis.

In the future, the researchers aim to prospectively apply this technique for rational drug design. “For a new drug candidate you could run this algorithm and understand whether or not a particular mutation is likely to come up,” said Anderson. “You can create that mutation and test it, so essentially use that in your discovery platform [to improve drugs].”

Predicting drug resistance isn’t just for microbes. Other researchers have applied predictive methods to understanding the evolution of resistance in cancer cells and viral proteins like HIV-1 protease.

Although such studies can predict specific mutations that evolve in the active sites of target bacterial proteins, researchers concur that they are, at present, less effective at identifying non-specific changes that increase antimicrobial activities, such as tweaks to drug efflux pumps or thickening of bacterial cell walls.

To pinpoint these less-specific changes, researchers from RIKEN’s Quantitative Biology Center in Japan recently combined laboratory experiments and algorithmic analysis to identify changes in E. coli gene expression in response to a range of antibiotics. The team selected laboratory bacterial strains that were resistant to multiple antibiotics and tested how these strains responded to drugs they had not previously encountered. Testing transcriptional and genomic responses, the researchers discovered a small subset of mutations and gene-expression changes that closely correlated with the evolution of resistance. The data, published in Nature Communications in December, hint that diverse molecular pathways might converge on common resistance mechanisms, such as ramping up the efflux pathways that bounce drugs out of cells.

Rather than relying on laboratory evolution, other studies have retrospectively analyzed how different genomic signatures might have contributed to drug resistance in clinical isolates. Mapping these changes can improve the predictive value of algorithms, according to systems biologist Roy Kishony of the Technion Israel Institute of Technology and Harvard University. “What my lab and others are trying to do is try to read the genome to see two things: what the genome can do today, and what it might evolve to do tomorrow,” he explained.

These data could help clinicians transition from giving patients a single antibiotic to prescribing tailored, multi-drug treatments early on, Kishony said. Quick genomic mapping of isolates from an infection could also improve diagnostic methods, he added.

However, whether mutations predicted computationally can accurately foretell the changes that occur during a real-world infection requires further study, said Anderson. For example, the SNPs identified by algorithms may be more relevant to bloodstream-based infections than those arising from biofilms, or those involving multiple species of bacteria.

Nonetheless, compared to other diseases such as cancer, correlating mutations predicted in vitro to those that may occur in vivo “is simpler in bacteria,” said Anderson. “The more we can predict it, the better we’ll get at having drugs out there that are less likely to evolve resistance.”