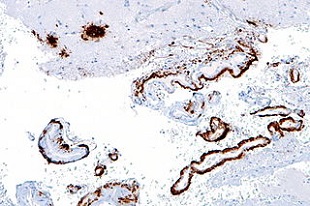 WIKIPEDIA, NEPHRONAn antidepressant drug appears to deter the formation of amyloid plaques associated with Alzheimer’s disease, according to a study published today (May 14) in Science Translational Medicine. A team led by Yvette Sheline of the University of Pennsylvania studied the effects of citalopram, a selective serotonin reuptake inhibitor (SSRI), on mice and a small group of people.

Amyloid plaques and neurofibrillary tangles can be found in the brains of Alzheimer’s patients, but it’s not clear if the plaques are precursors to neurodegenerative problems or an effect of them. Citalopram, which is marketed as Celexa and Cipramil, is typically used to treat depression, anxiety, or obsessive-compulsive disorder. Sheline’s team had previously determined that SSRIs work through serotonin receptors on extracellular receptor kinase. “This results in an up-regulation of alpha-secretase, an enzyme that cleaves amyloid, and therefore reduces its production,” Sheline told The Scientist in an e-mail. “Every SSRI...

The researchers first studied the effects of citalopram in the brains of mice. Using a technique developed by study coauthor Jin-Moo Lee of the Washington University in St. Louis, Missouri, they shaved away layers of a mouse’s skull until it was translucent and pliable. Through two windows, the researchers could peer inside the mouse’s brain and watch amyloid plaque formation as it happened. They found that citalopram prevented existing plaques from growing and reduced the formation of new plaques by about 78 percent. In a randomized clinical trial involving 28 healthy people, 18 to 50 years old, the drug also prevented formation of beta amyloids in the cerebrospinal fluid compared with placebo.

Researchers have long realized that SSRIs can prevent amyloid plaque formation, but some studies have shown that the drugs are not effective at treating symptoms of neurodegenerative diseases. Those findings threw cold water on the hypothesis that reducing amyloid production would lead to a lower incidence of Alzheimer’s disease. Citalopram is known to be effective, however, at treating depression, which is a common secondary diagnosis among Alzheimer’s patients.

Sheline’s team continues to pursue citalopram as a prophylactic, rather than a treatment. “If we could show that SSRIs affect the accumulation of plaque in humans we would want to use it early in the disease process, during the window of ‘preclinical dementia,’ when people do not yet have any cognitive deficits,” she said.

“Citalopram is now added to the list of medications that have such effects on amyloid and therefore make it a consideration for prevention trials of Alzheimer’s disease,” said Constantine Lyketsos, director of the Alzheimer’s and Memory Center at Johns Hopkins School of Medicine, who was not involved in the work, in an e-mail to The Scientist. But, he cautioned, “the main hypothesis that reducing amyloid production reduces Alzheimer’s disease incidence is unproven.”

MIT’s Richard Wurtman, who was the first to show that stimulating neurotransmitter receptors with acetylcholine prevented amyloid plaque formation, expressed similar caution, but suggested that Sheline’s team may succeed where others have not. “Maybe Alzheimer’s is a more heterogeneous disease than we think,” he said. Nailing down all the details on the drug’s effects will be important, he noted. “I think they need to quantify the effect. I’d want to know, in people, how much do you have to give, how long do you have to give it,” he said.

Sheline’s group next plans to conduct another randomized clinical trial of citalopram on healthy, older adults.