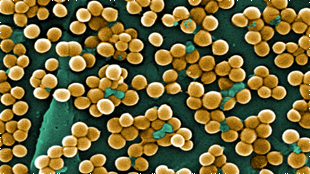 The struggle to surmount antibiotic-resistant bacteria seems to grow daily. One line of research aims to develop a new class of antimicrobial therapy—antimicrobial peptides (AMP), based on small molecules of the innate immune system that exhibit microbicidal and immuno-modulatory activity. But like antibiotics, bacteria can evolve resistance to AMPs, risking the possibility that bacteria will also be able to resist the first arm of the human immune system.

In new research published in Biology Letters, scientists demonstrate for the first time that forcing bacteria to evolve resistance to one AMP can confer some cross-resistance to a natural host-defense peptide.

The study is an “important proof of principle,” said Gabriel Perron, an evolutionary microbiologist at Harvard University, who did not participate in the research, by email. Though previous studies have shown emergence of cross-resistance to AMPs before, explained Perron, this is...

“It’s [a] pretty important [study],” agreed Angus Buckling, an evolutionary biologist at the University of Exeter, who was not involved in the research. It emphasizes the danger that use of “a potential therapeutic peptide can result in cross resistance to a human defensin.”

Antimicrobial peptides are small, positively charged proteins produced as part of the innate immune system of organisms as disparate as amphibians, insects, and humans. Widely varying in their sequence and structure, AMPs act on bacteria by disrupting the cell membrane or slipping inside and affecting internal processes. AMPs can also indirectly facilitate microbial defense by recruiting phagocytes to the site of infection and boosting the immune cells’ killing activity. AMPs’ wide distribution and the apparent lack of resistance in bacterial populations have made AMPs attractive potential therapeutics.

However, bacteria can evolve resistance to AMPs under strong selective pressure in vitro. In 2003, Graham Bell at McGill University and Pierre-Henri Gouyon at Université Paris-Sud published an article voicing another concern—that when cross-resistance evolved, as it surely would, bacteria might become resistant not only to AMPs adopted for therapeutic use, but also to endogenous human peptides.

To test this possibility, Michelle Habets and Michael Brockhurst at the University of Liverpool cultured Staphylococcus aureus with increasing concentrations of pexiganan, an AMP derived from frogs. Sure enough, after 14 passages to plates containing higher pexiganan, the bacteria not only evolved resistance to the therapeutic AMP, but two of the five strains also showed cross-resistance to human neutrophil defensin-1 (HNP-1).

Not everyone is concerned, however. Though Robert Hancock of the University of British Columbia acknowledges that microbial resistance to AMPs must be addressed during therapeutic development, and that cross-resistance is a possibility, he pointed out that the cross-resistance seen in this study is slight. HNP-1 is found at orders-of-magnitude higher concentrations in neutrophils than the researchers used to test the pexiganan-resistant isolates of S. aureus, he explained. Furthermore, pexiganan has been tested on more than 800 people in a large-scale clinical trial for treatment of diabetic foot ulcers, and while it failed to emerge as an effective antimicrobial therapy, clinicians saw no signs of pexiganan-resistant bacteria. Until such resistance to human AMPs is reproduced in an in vivo model, Hancock is not convinced that worries about cross-resistance are well-founded.

“We really need drugs, badly,” said Hancock, who sees this focus on theoretical concerns about cross-resistance as tangential to the “bigger concern” of antibiotic resistance.

But Brockhurst and others feel that such investigations are needed now to forestall a repeat of the endless battle against antibiotic resistance. Brockhurst also points to another worrying aspect of the data: even once pexiganan was removed from the culture media, the bacteria retained resistance to the AMP for 100 bacterial generations, suggesting that cross-resistance to endogenous AMPs may be difficult to get rid of once bacteria acquire it.

For now, Brockhurst acknowledges that this is just the first step, and longer-term studies are needed to better address the level of cross-resistance that could evolve in bacteria. But even these preliminary data highlight the importance of “evolutionary thinking in public health,” said Perron. “This fundamental issue will tell a great deal whether AMPs are likely to stay efficient for a while or whether they will follow the same fate as classic antibiotics.”

Correction: This story has been updated to correctly state Robert Hancock’s name. The Scientist regrets the error.