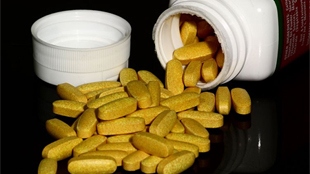 WIKIPEDIA, RAGESOSSAlthough some people spend countless dollars on antioxidant supplements to improve their health, many studies have found that these would-be panaceas could actually exacerbate the diseases they claim to prevent.

Now, a team of Swedish scientists has shown that two antioxidants—vitamin E and N-acetylcysteine (NAC)—can fuel the growth of lung cancers in mice. The team also worked out why.

Antioxidants protect cells from chemically unstable molecules called reactive oxygen species (ROS), which can easily react with DNA and cause damage that leads to cancer. But Martin Bergo’s team at the University of Gothenburg showed that antioxidants neutralize ROS in tumors as well as healthy cells. “If we give extra antioxidants in the diet, we’re helping the tumor to reduce radicals that would otherwise block its growth,” Bergo said. “Then it can speed up all it wants.”

The results, published today (January 29) in Science Translational Medicine, are...

“They might have a small undiagnosed tumor, and no one knows the frequency of those,” he added. “There’s a possibility that antioxidants would speed up the growth of those tumors.” This word of caution is especially relevant to people with COPD, who often take large amounts of NAC to relieve the build-up of mucus in their airways.

“A warning seems appropriate for everyone who has been seduced to use antioxidants or vitamins on a regular basis, as a preventive measure,” the University of Syndey’s Nico van Zandwijk told The Scientist in an e-mail.

These results fit with those from a long line of human clinical trials, in which antioxidants failed to prevent disease or made things worse. The first of these was published in the New England Journal of Medicine in 1994, and showed that male smokers who took beta-carotene supplements were more likely to develop and die of lung cancer than those who did not. Other trials found similar results for other antioxidants and other cancers, and some of those studies were even stopped early.

In 2012, the Cochrane Collaboration analyzed the results of 78 earlier trials and, based on the most careful of them, concluded that people who took antioxidant supplements (including both healthy people and those with chronic diseases) were more likely to die prematurely than those who did not.

Few studies had looked at the reasons behind these seemingly paradoxical effects. Bergo’s team, led by graduate student Volkan Sayin, began by feeding NAC and vitamin E to mice with early lung cancers, at doses comparable to those in human multivitamin pills. The mice that ingested the antioxidants developed tumors that were three times bigger, and they died twice as fast.

Sayin then showed that tumors normally have lower levels of ROS than normal tissues. The antioxidants reduced these levels even further, protecting the tumors from DNA damage. They also dramatically reduced the activity of p53—a guardian protein that prevents cancer by detecting damaged DNA and putting the brakes on cell division.

By lifting p53’s suppression, the antioxidants allowed the cancer cells to grow and divide faster than usual. Indeed, when the team abolished p53 entirely, neither NAC nor vitamin E affected the growth of the lung tumors. “P53 is normally inactivated in late-stage lung cancer, so what we’re doing is speeding up the progression of malignancy,” said Bergo.

“This is an extremely striking observation, but not surprising given the rather disappointing outcomes of patients at risk for developing lung cancer who had been treated with various antioxidants,” David Tuveson from Cold Spring Harbor Laboratory, who was not involved in the work, said in an e-mail. “We should now consider whether people consuming high doses of antioxidants are ironically promoting cancers that they seek to prevent.”

Although Bergo’s team focused on mice in this study, the scientists found the same mechanisms at work in human cells. They also used mice with the same genetic defects as those that cause human lung cancers, and whose tumors look identical to human ones under the microscope.

They are now doing similar experiments in melanomas, leukaemias, and gastrointestinal tumors to see whether the same mechanisms hold true for other types of cancer.