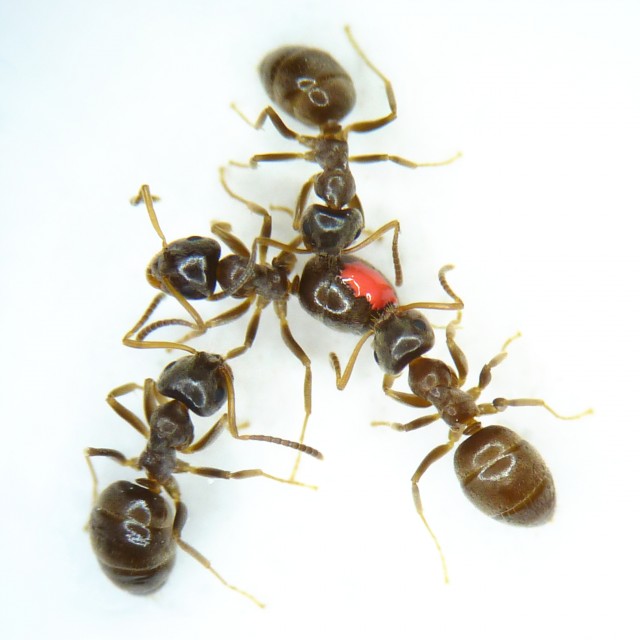 Ants put an active effort into developing social immunity, the phenomenon whereby contact with infected individuals can confer resistance to the community, according to a study published today (April 3) in PLoS Biology. Ants will groom their fungus-infected nestmates more, which promotes minor fungal infections that spur a fungus-specific immune response, similar to “chickenpox parties” popular before the development of the chickenpox vaccine.

“This study is a great addition to our overall understanding” of how insects defend themselves against pathogens, Philip Starks, a behavioral ecologist at Tufts University who was not involved with the study, said in an email. “The active identification and grooming of infected individuals is likely to have significant fitness advantages,” he explained, “and importantly,...

The work springs from a previous observation by Sylvia Cremer’s group at the Institute of Science and Technology Austria in Klosterneuburg, Austria, that introduction of an infected ant into a colony protected the colony against later challenge with the pathogen. How exactly the nestmates were being protected was unclear, said Cremer, but the possible mechanisms fell into two categories: passive and active immunity. In passive immunity, antimicrobial peptides upregulated after infection could be passed among animals through physical contact, conferring resistance against the pathogen to nestmates without spurring an infection or immune response. In active immunity, the nestmates would acquire their own infections by contacting the infected ant, prompting their own immune responses to prepare them for subsequent exposure.

Cremer and her colleagues began by investigating how nestmates encountering an infected ant acted. They infected Lasius neglectus ants with Metarhizium anisopliae, a fungus that sticks to the insects’ outer cuticles and causes infection only after it has worked its way into the body, which takes a day or more. The researchers then placed infected or non-infected ants in a box with five nestmates, and watched what happened. In both groups of ants, anything on an ant’s cuticle prompted its nestmates to groom. But ants without the spores were groomed at a constant rate over 5 days, while Cremer saw a spike in grooming of the fungus-infected ants in the first day or two of infection, suggesting that the pathogen was prompting a behavior change in the nestmates.

“It suggested that active immunity might be the mechanism,” said Cremer. The ant’s immune response takes about 48 hours to kick in, she explained, so the spike in grooming happened before the infected ant’s immune systems could start ramping up. Also, after about 2 days, the spores will germinate and become much stickier, making them difficult to remove, so the ants were working in the initial window where transferring the pathogen was easiest. Indeed, using fluorescent spores, Cremer could see that the spores had been transferred to the nestmates.

But even though they’d been exposed, only 2 percent of nestmates died from fungal infections, even though half of the initially infected ants, which had been dipped in solvent with M. anisopliae spores, died within 5 days. When ants were exposed to a dose of fungus expected to cause a 2 percent death rate, Cremer’s group saw an increase in antifungal activity, suggesting that this low level of infection was indeed enough to stimulate a protective immune response.

Using quantitative PCR to look at several immune mediators in ants, Cremer and her colleagues identified at least two molecules—defensin, analogous to the antifungal peptide termicin in termites, and prophenoloxidase, a general immune mediator in ants—that were upregulated, suggesting the ants were launching a somewhat fungus-specific immune response.

Ants produce a variety of antimicrobial substances, which can adhere to their cuticle or be passed through food droplets. But when Cremer infected ants with fungus and looked at the ability of their secretions to inhibit fungal growth, she saw no increase in antifungal activity over uninfected ants. Additionally, when Cremer exposed naïve nestmates to infected ants 3 days after infection, when the infected ant’s immune response was peaking, she didn’t see an increase in antifungal immune activity in the nestmates, suggesting that passive transfer of immunity was unlikely. And a mathematical model based on epidemiological models of human infections further showed that fewer individuals died and infections dwindled more quickly in colonies that practiced active immunity.

“It’s a thorough study,” says Rebeca Rosengaus, who studies insect sociobiology at Northeastern University in Boston and did not participate in the research. Although social immunity is a well-known phenomenon in social insects, this is the first investigation in ants using the fungus M. anisopliae, a model infection for insects, said Rosengaus.

But passive immunity shouldn’t be overlooked so easily, Rosengaus warned. Other possible mechanisms, such as the transfer of immune mediators from queens to eggs, deserve a more thorough investigation in the role of social immunity in ants, and not all infections will affect the population in the same way. Bacterial infections are internal, for example, and Rosengaus has found that termite populations with such infections confer passive immunity through food droplet exchange.

How, exactly, the ants can tell that there’s a dangerous pathogen on their nestmates is also a future avenue of investigation, says Cremer, who also hopes to look at how ants’ behavior changes in more natural settings.