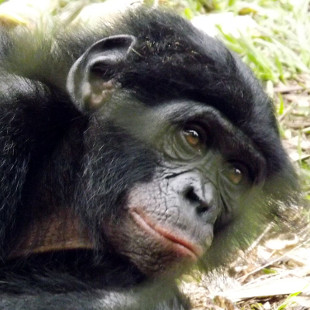 Contagious yawning has long been linked to empathy: humans and apes yawn more in response to the yawns of their kin and friends. Now, scientists studying yawn contagion have shown that humans may not always be the most empathetic species. Their results, published today (August 12) in PeerJ, show that humans yawn more than bonobos only when close family and friends trigger the yawns. In the presence of mere acquaintances, however, humans and bonobos showed similar yawn sensitivity.

“It seems that the basal level of empathetic capacity is the same in the two species,” said Elisabetta Palagi from the Natural History Museum at the University of Pisa in Italy, who co-led the study. “But when an emotional bonding comes into play, people overcome bonobos.”

Matthew Campbell, a primatologist at California State University Channel Islands who was not involved with the work, agreed. “These are...

Several studies have examined empathy in great apes and humans separately. But the present study is the first to directly compare empathetic abilities between species, according to Palagi. “This has probably not been done before because quantifying empathy in animals is difficult,” she said. “In addition, most empathy studies in humans have used questionnaires and direct interviews, which cannot be replicated in bonobos.”

Yawning, however, is easily detected and morphologically identical across species. Palagi’s team had previously found that both humans and bonobos show yawn contagion according to an empathetic gradient—both yawn more frequently and more often among kin and friends, followed by acquaintances, and then strangers. “So we thought of comparing the two species, and evaluating their level of sensitivity to others’ yawns as a factor of relationship quality and bonding,” she explained.

The team hypothesized that if humans are the most empathetic species, then they should show the most empathetic behaviors at all times. Between 2009 and 2013, the team observed yawn contagion among 33 humans going about their everyday activities in different locations—restaurants, offices, and waiting rooms—recording 1,375 yawns over 380 hours. Similarly, the team observed yawn contagion among 16 bonobos in two zoos while the bonobo colonies rested, moved, and foraged, recording nearly 2,130 yawns over 800 hours.

“The authors have done a fantastic job in keeping the methods as similar as possible across two species,” Jingzhi Tan, who studies human and bonobo cognition and behavior at Duke University and was not involved in the study, told The Scientist in an e-mail. “This is incredibly challenging because nonhuman primates would not walk in your testing rooms, listen to your instructions word-by-word, and sit down patiently to work on your tasks.”

“This suggests that the way emotional contagion works may not have changed much since humans split off from chimpanzees and bonobos 5 [million] to 7 million years ago,” said Campbell. “Rather, what appears to have changed is something about deep emotional connections that humans have with close family and friends.  Humans could bond with others more intensely than bonobos, or humans could do this more frequently than bonobos.”

“All of this seems in line with our general expectations about empathy-driven behavior,” primatologist Frans de Waal of Emory University who was not part of the study told The Scientist in an e-mail. “Social closeness and familiarity matter.”

Campbell, however, pointed out a potential limitation of the work. “These bonobos were in a small captive group where their choices of individuals to interact with were severely constrained, but the humans were not,” he said. “As difficult as it would be to do, studying bonobos in the wild may be necessary to rule out that the lack of choice prevented bonobos from forming deep bonds with others.”

“As for further exploration, it would be great to add more distant relatives of humans in the future,” he added. “By testing the other apes, adding monkeys, and some non-primate species, we could start to get a picture of how emotional contagion evolved in mammals, all of whom show this ability to some extent.”