Researchers recovered eight species from the salty, alkaline environment—increasing the known biodiversity of animals in the California lake five-fold.

Mono Lake in California is a salty, alkaline, arsenic-rich body of water known to be home to just two eukaryotes: brine shrimp and alkali flies. In a study published today (September 26) in Current Biology, researchers found eight more species residing in the lake and its sediments—all hardy, tiny nematodes. Culturing one species from the group Auanema in the lab revealed that the animals are capable of surviving 500 times the dose of arsenic that would kill a person.

“Mono Lake is famous for being a limited ecosystem in terms of animals . . . so it’s really cool that they’ve managed to demonstrate that there are a bunch of nematode species living in there, as well as the shrimp and the flies. It expands the whole ecosystem considerably,” says...

It’s a reminder that we define extremophile by our own experience, and that’s actually quite a narrow definition.

For the most part, Caltech’s Paul Sternberg and his group focus on nematode genomes and how those influence the animals’ development, behavior, and physiology. But one hobby of the researchers in his lab is looking for nematodes in places that others have overlooked. “It’s just about awareness,” he says. “Mono Lake is an extreme environment,” and lab members wondered if they could find the worms surviving the harsh conditions.

Then-postdoc Amir Sapir, now a lecturer at the University of Haifa-Oranim in Israel, and other Sternberg lab colleagues went on a collecting trip to the lake in 2016. They used shovels to scoop up soil in the dry areas surrounding the lake, from sediment from within the lake, and in the tide zone at the lake’s edge. They didn’t have to take extra precautions because limited exposure to the lake’s water is safe for humans, explains James Lee, now a postdoc at Rockefeller University. The team found live nematodes at three sites spread out across Mono Lake, then returned the next summer and isolated live animals again, indicating that there is a regular population of nematodes there.

Of the eight species of worms the researchers collected, three were already described genetically and five had not been sequenced before. Based on the structures of the animals’ mouths, the team predicted that the Mono Lake nematodes use a variety of strategies to get food, including grazing on microbes, preying on other animals, and parasitizing hosts. 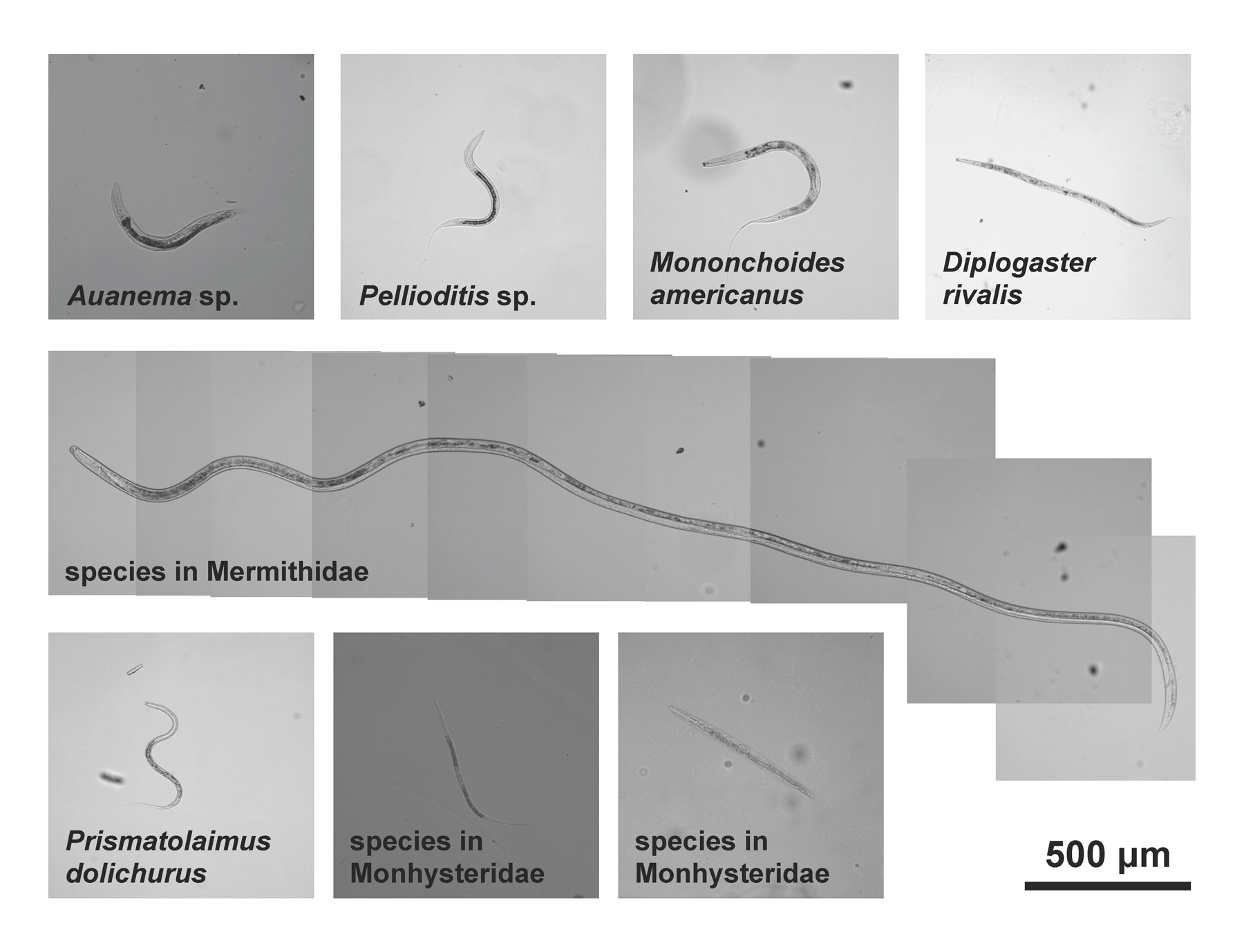 Sternberg, Sapir, Lee, and colleagues were able to easily culture one of the isolated species in the lab. They determined that the animals could survive concentrations of arsenic 500 times higher than people can, thanks at least in part to a mutation the dbt-1 gene, which is involved in amino acid metabolism. A look at three other Auanema species that had been previously isolated from much less harsh environments showed that they also carry the mutation, as does a Hawaiian strain of the popular model nematode Caenorhabditis elegans. The mutation in dbt-1 is likely not the only thing contributing to arsenic resistance, however, because the Auanema species survive better in arsenic than any strain of C. elegans.

“It’s just so cool finding another place where there are lots of nematodes and not much else,” says Tullis Onstott, a geoscientist at Princeton University who has previously published evidence for nematodes living kilometers below the earth’s surface and was not involved in the study. One open question, he says, is whether or not “this change in amino acid metabolism is conferring some other advantage to this particular nematode species that’s completely unrelated to arsenic.”

See “The Energy of Life”

“Arsenic resistance is something we can study in the lab, but maybe that’s not the most interesting part of the story,” agrees Sternberg. In the future, the researchers, including Andre Pires da Silva of the University of Warwick in the UK, who studies the non-extremophile Auanema species, could compare the worms across the genus to trace the changes that made the Mono Lake species so tolerant of these conditions. “The most important thing is that there’s this diversity of life in extreme environments that we just haven’t appreciated before,” Sternberg adds.