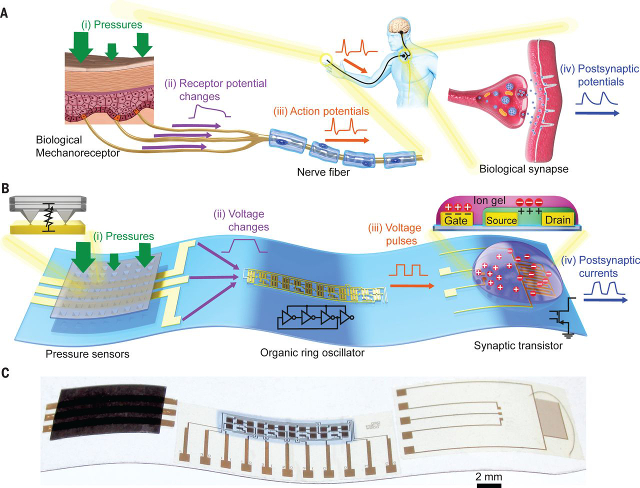 (A) How a natural, biological afferent nerve is stimulated by pressure. (B) An artificial afferent nerve made of pressure sensors, an organic ring oscillator, and a synaptic transistor. (C) A photograph of the artificial afferent nerve system.REPRINTED WITH PERMISSION FROM Y KIM ET AL., SCIENCE 360:998 (2018) Feats of engineering though they may be, today’s prosthetic devices can be unsatisfying to the human brain. “If you have a hand [and] . . . you can control it in a very rough manner, but it doesn’t give any feedback, then it becomes more of a mental load for the patient, and they typically put their prosthesis onto the shelf after a while,” says Henrik Jörntell, a neurophysiologist at Lund University in Sweden.

But in a new invention announced today (May 31) in Science, Jörntell, who was not involved in the work, sees the possibility of one day...

“[M]imicking complicated biological sensory nerve systems including all functional elements in the neural networks remains a great challenge,” coauthor and engineer Tae-Woo Lee of Seoul National University in South Korea writes in an email to The Scientist. The new artificial nerve system is an “unprecedented” step in that direction, he says, that “can be potentially used for improvement of spatial resolution of object recognition and fine tactile information processing, such as texture recognition, distinguishing of edges on objects and robust braille reading.”

To build the device, Lee’s research group teamed up with that of chemical engineer Zhenan Bao of Stanford University to combine three components into a flat, flexible sheet a few centimeters long: pressure sensors made of organic polymers, carbon nanotubes, and gold electrodes; ring oscillators that convert the sensors’ input to electrical pulses; and a transistor that combines input from multiple ring oscillators into an electrical current. “When we build a system, if one part does not behave the way it’s supposed to, then the whole system will fail,” Bao says. “The most challenging part was really to get all three components to work together in a cohesive way and be able to actually demonstrate a function.”

“The novelty of the paper is primarily in integrating elements that have been investigated previously, but in this case, putting it all together,” says Alec Talin, a materials engineer at Sandia National Laboratory in California who was not involved in the work.

If it’s been interfaced to a biological system, you could in a sense have that system understand inputs that normally it would never understand.

The research team used the artificial nerves ex vivo to “feel” braille characters, and the device produced distinctive outputs for each one. The developers also used electrodes to connect the transistor to nerves at the end of the detached leg of a cockroach, inducing it to move.

“We are still at the very early stage” of building an artificial nerve system that could be incorporated into the skin of a prosthetic, Bao says. Human skin “can detect heat, can detect vibration, pressure, and various different forms of forces. To really truly mimic our skin . . . we need to incorporate other sensors and increase the level of integration that we’re able to carry out, and further improve the device stability and reliability.”

Down the road, Jörntell says, the artificial nerves’ small size could be key to improving prosthetics’ skin, because it would allow a greater density of sensors than is now possible. If “you give a sufficiently rich sensory feedback . . . then all of a sudden, these prostheses could turn more interesting to the patient groups they are directed to,” he says. Chiara Bartolozzi, an engineer at the Italian Institute of Technology in Genova who was not involved in the work, notes that the output of the new artificial nerve is also very different from that of today’s commercially available pressure sensors, which yield numbers that correlate with intensity rather than currents. The artificial nerve works more like biological mechanoreceptors.

One advantage of connecting the artificial nerves to a biological central nervous system would be that the latter could handle the computing needed to make sense of the output. The artificial nerves also have the potential to greatly improve the sensing and object-manipulation capabilities of robotics, Bartolozzi says, but only if a computational system is devised that can process the sensors’ output.

“If one were to add to this work a neuromorphic circuit architecture, like a deep neural network that can actually learn to translate the different signals into some sort of information . . . then I think that would be really, really interesting,” says Talin. Beyond the applications to robotics, “if it’s been interfaced to a biological system, you could in a sense have that system understand inputs that normally it would never understand,” such as giving humans the ability to sense infrared light.