ABOVE: The union representing faculty members at the City University of New York held a protest in response to announced layoffs.
NINA WESTERVELT

On May 15, Mark Lucas received a phone call that left him numb. After 21 years as a physics professor at Ohio University, he received notice that after the next school year, his contract would no longer be renewed. “I’m within 10 years of retiring,” Lucas says. “Given the current situation, I have no idea what the job market will be like.”

Lucas was not alone. Citing ongoing budget challenges that were heightened by the COVID-19 pandemic, the university sent out non-renewal notices to 53 members of its faculty.

We expect the situation for the next one or two fiscal years to be very challenging.

The pandemic has bored holes in budgets at universities and colleges across the US and beyond. To stem the spread of the coronavirus, higher education institutions shuttered their campuses, sent students home, and moved classes online. As a result, schools have lost millions of dollars in revenue—and many expect further losses due to the uncertainly about whether the 2020–21 school year can convene on campus this fall.

“All colleges and universities have been affected by the pandemic. Most are facing a serious cash flow crisis,” says Terry Hartle, the senior vice president of government and public affairs at the American Council on Education, an association of college presidents. “The vast majority of college and university presidents are worried about fall enrollment and the financial viability of their institutions.”

To deal with this financial strain, many universities have started to reduce their workforces. According to a list kept by The Chronicle of Higher Education, at least 48,086 employees (faculty and other staff) across 190 US institutions have been affected by a COVID-19–related layoff, contract non-renewal, or furlough (a temporary unpaid leave of absence). Some institutions, such as Urbana University in Ohio, have permanently shuttered their doors.

In a letter sent to faculty and students in April, Ohio University President Duane Nellis detailed the financial effects of the pandemic on the institution: more than $18 million in revenue was lost due to the need to refund students for housing, dining, and parking costs, as well as canceled athletics, summer camps, and study abroad programs. As a public university, Ohio University also receives funding from the state, and Nellis noted that his institution was expecting a 20 percent reduction in state funding. That amounts to approximately $8 million in losses in the current fiscal year (FY2020), and $35 million in the next.

Other universities are also expecting significant shortfalls. The University of Arizona, which announced furloughs and pay cuts for faculty and staff in April, projects that the pandemic will result in a $66 million loss in FY2020, for which the institution had earlier estimated a $37 million surplus from its $2.2 billion budget. Meanwhile, when the University of Missouri, which had a $3.5 billion budget in FY2020,  announced layoffs, furloughs, and pay cuts in May, it stated that cuts to state funding amounted to a $17 million reduction this year, plus an additional, unspecified amount of lost revenue due to refunds to students.

Johns Hopkins University, a private institution whose researchers have played a key role in COVID-19 tracking efforts, expects a net loss of $100 million in FY2020—the institution had initially expected a net surplus of $72 million in its $6.5 billion budget—and up to a $375 million loss in FY2021. This is due to a variety of lost income sources, including tuition and other student-related revenue and clinical revenue from faculty physicians. In a message published in April, the university’s president, Ronald Daniels, wrote that furloughs and layoffs “are regrettably expected to be necessary within some units of the university as an unavoidable consequence of the losses we are experiencing.”

See “Furloughs and Pay Cuts Announced for U of Arizona Employees”

Some of the hardest-hit institutions, such as Ohio University, were already experiencing budget difficulties prior to the pandemic. “The faculty and staff position eliminations were responsive to both budget challenges we faced prior to the pandemic as a result of shifting enrollments, as well as the global crisis, which has made it necessary for our administration to respond with even more urgency,” Carly Leatherwood, the senior director of communication services at Ohio University, writes in an email to The Scientist.

The CARES Act, a $2 trillion stimulus bill passed in March by the US federal government to address the economic fallout of the pandemic, earmarked approximately $7 billion for higher education institutions to deal with pandemic-related losses and another $7 billion for affected students. “Did it help? Yes, absolutely,” Hartle says. “Was it enough to help institutions avoid a potential catastrophe? No, not yet.” 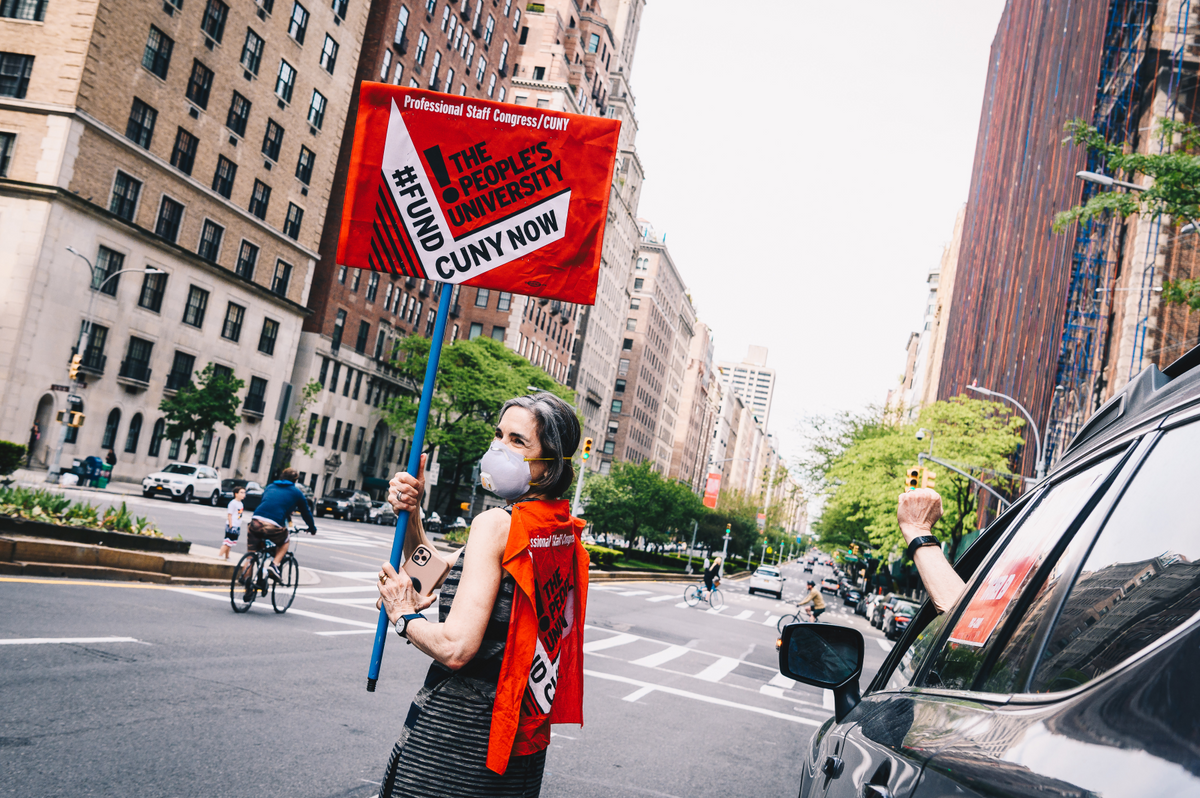 The Professional Staff Congress, the union representing faculty at CUNY, demonstrated in response to announcements that the university system would be laying off faculty members and cutting courses.
nina westervelt

Like Lucas, Maria Mellone, an associate lecturer in the mathematics department at the University of Massachusetts (UMass) Boston, received a non-reappointment notice in mid-May. Mellone, however, doesn’t have a year to look for a new position as her contract ends this semester.

According to Steve Striffler, the director of the Labor Resource Center at UMass Boston and the president of the Faculty Staff Union, approximately 350 non-tenure-track faculty members at UMass Boston received the same notice. In a letter sent to Mellone and others, the university’s interim provost, Emily McDermott, states the university intends “not to appoint or reappoint any associate lectures or clinical associate lecturers for the Fall 2020 semester,” but adds that rehires may be possible once the budgetary outlook becomes clear.

One of Mellone’s biggest concerns is her son’s tuition at UMass Boston. As the child of a staff member, he receives tuition assistance. Without that financial support, Mellone says, “I don’t know if he’s going to be able to go to college next semester.” The possibility of rehire is “not reassuring,” she adds. “I have to look for another job.”

John Hoey, the executive director of communications at UMass—which is made up of five campuses—says that the university system lost approximately $123 million in revenue during the first quarter of 2020 due to the pandemic. He adds that UMass expects to end the fiscal year with a balanced budget due to cost-cutting measures such as furloughs as well as federal funding provided by the CARES Act. “We were in a decent position to respond to the issue in this fiscal year,” Hoey says. “We expect the situation for the next one or two fiscal years to be very challenging.” Variables such as student enrollment, federal aid, and costs associated with reopening campuses will determine what university finances look like in the coming years, he adds.

There are ongoing efforts to urge universities to stop layoffs. After the City University of New York (CUNY), which includes 25 campuses across New York City, announced that it would be firing faculty and slashing course offerings, the Professional Staff Congress (PSC), the union representing its faculty, published an open letter to the university president demanding an immediate end to the cuts. In addition, the PSC has run TV ads and staged a socially distant protest to draw attention to their demands. “We feel that . . . first of all, they should really freeze and rescind these cutbacks and layoffs, and they should be looking to the state and to the federal government to fund the university,” says Andrea Vásquez, first vice president of the PSC. CUNY did not respond to The Scientist’s requests for comment.

At Ohio University, both students and staff have spoken out against the staff layoffs. For example, the student-organized movement #SaveOUrProfs has been actively advocating on social media for faculty layoffs to end. Lucas is not optimistic about his chances of rehire—instead, he’s planning to look for a new job. He says he hopes to keep teaching, but he’s also prepared to pivot to a more technology-focused position, such as programming. “My gut says there are a number of people like me out there, and the positions are dwindling,” Lucas says. “It pains me to realize that I might not be teaching anymore.”