Turning off just one factor in the brain’s astrocyte cells is sufficient to convert them into neurons in live mice, according to a paper published in Nature today (June 24) and one this spring by another research team in Cell. By flipping this cellular identity switch, researchers have, to some extent, been able to reverse the neuron loss and motor deficits caused by a Parkinson’s-like illness. Not everyone is entirely convinced by the claims.

“I think this is very exciting work,” says Pennsylvania State University’s Gong Chen of the Nature paper. It reaffirms that “using the brain’s internal glial cells to regenerate new neurons is a really new avenue for the treatment of brain disorders,” he continues. Chen, who is also based at Jinan University and is the chief scientific officer for NeuExcell—a company developing astrocyte-to-neuron conversion therapies—has performed such conversions in the living mouse brain by a different method but was not involved in the new study.

In Parkinson’s disease, dopaminergic neurons within the brain’s substantia nigra—a region in the midbrain involved in movement and reward—gradually die. This results in a deterioration of motor control, characterized by tremors and other types of dyskinesia, with other faculties such as cognition and mood sometimes affected too, especially at later stages of the disease. While treatments to boost diminishing dopamine levels, such as the drug levodopa, can ameliorate symptoms, none can stop the underlying disease process that relentlessly eats away at the patient’s neurological functions and quality of life.

In the search for disease-modifying therapies, researchers are investigating ways to regenerate or replace the missing neurons. One strategy is to inject stem cell–derived neurons into the brain. While this approach, using donor stem cells, is already in a clinical trial, it is far from ideal. The use of donor cells runs the risk of potential immune rejection. On the other hand, using a patient’s own cells would be costly and time-consuming.

Another approach gaining momentum is to directly transform non-neuronal cells in the midbrain into neurons, which in principle should be simpler and faster than injecting lab-grown neurons. Chen and colleagues have shown that boosting the production of two transcription factors that induce neurogenesis—Neurod1 and Dlx2—in the brains of mice can convert astrocytes into GABAergic neurons, while others have shown a cocktail of three neurogenic transcription factors can convert astrocytes into dopaminergic neurons in mouse brains.

Instead of adding transcription factors, Xiang-Dong Fu of the University of California, San Diego, and colleagues’ new approach relies on removing an inhibitor of neurogenesis. Work from his lab had shown that the RNA binding protein PTB prevents the activation of neuronal factors in non-neuronal cells and that deleting it could convert fibroblasts into neurons in culture. It’s like a key, he says. “You . . . turn the machine on and then you don’t need it anymore.” Now, Fu’s group shows in Nature that the approach works directly in the living brain.

Using genetically engineered mice in which astrocyte-specific production of PTB could be switched off at will by injecting a silencing RNA, the team observed that several weeks after PTB depletion, the cells began producing neuronal markers, with the number of ex-astrocytes producing such markers increasing as the weeks went by. Interestingly, injections at different sites in the brain induced different types of neurons—with injections to the substantia nigra producing the highest abundance of dopaminergic neurons. This suggested that while PTB inhibition enabled neuronal conversion, unknown factors within the astrocytes themselves, or their surrounding environment, influenced the neuronal subtype they became. The team went on to show that the converted cells could innervate other brain regions and could form functional synapses.

The team then tested its method in mice whose substantiae nigrae were injected with 6-hydroxydopamine—a dopamine analog toxic to dopaminergic neurons—to mimic Parksinon’s disease. They showed that astrocyte-specific PTB depletion in these mice boosted the numbers of dopamine neurons and the production of dopamine itself, and improved the animals’ motor functions within three months of the treatment. Animals that did not receive PTB-depletion treatment showed poorer limb use and increased rotational movements—both standard measures of motor function impairments caused by dopaminergic neuron loss—compared with treated animals. The recent paper in Cell by an independent group has shown similar results.

“The results . . . present intriguing possibilities for cell replacement strategies,” Marina Emborg, a Parkinson’s disease researcher at the University of Wisconsin-Madison who was not involved in the studies, writes in an email to The Scientist. “The safe clinical translation of this method will need to consider whether the number of astrocytes present in the [patient] brain is enough for effective cell replacement and whether shifting astrocytes into neurons affects brain homeostasis.” Also, the researchers will “need to assess whether the changed cells remain with a neuronal phenotype and for how long they survive,” she adds.

The papers’ reports of cell transformation don’t convince Ole Isacson of Harvard Medical School who works on stem cell–derived neurons for treating Parkinson’s disease. “Turning astrocytes into neurons is something a lot of scientists would want to do,” he says, but it is possible what the scientists are calling astrocyte-derived neurons are actually preexisting neurons. The astrocyte-specific machinery of the teams’ transgenic mice might to some extent leak into surrounding neurons, he says, giving such neurons the appearance of having once been astrocytes. He also says he thinks the teams should test their approaches in a range of robust Parkinson’s disease models.

While Fu is convinced his cells are the real deal, there is one problem he admits the approach faces: that it didn’t work as effectively in older animals as in younger ones. Experiments in young mice are all very well, but Parkinson’s disease affects the elderly, says Chen, so showing the cells can still be converted at older ages, “is a critical thing.” 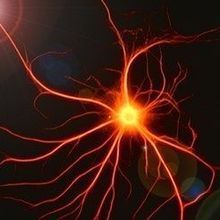