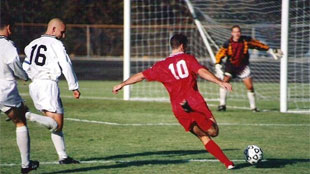 Credit: Rick DikemanElite athletes are not just stronger, faster or more agile than their peers; their visual learning skills are also a cut above.

Jocelyn Faubert from the University of Montreal found that professional football, ice hockey, and rugby players were significantly better than amateurs or non-athletes at processing a fast-moving, complicated scene. And as the three groups practiced, the pros widened their advantage even further.

“During a game, athletes are always confronted by situations where they have to keep track of teammates or opponents,” said Faubert. An exceptional ability to do this might be part of what separates the greats from their peers, he added.

“They aren’t just better because they’ve had more practice, although there’s that too,” said Andrew Wilson, a perceptual psychologist at Leeds Metropolitan University in the United Kingdom who was not involved in the study. “They are also better because they learn faster....

Faubert recruited 51 soccer players from the English Premier League, 21 ice hockey players from the National Hockey League, and 30 rugby players from the French Top 14 Rugby League, along with 173 elite amateurs from college-level sports and 33 non-athlete students. He then asked the participants to follow a set of spheres, moving in all directions on a computer screen, and track the paths of a few select shapes. This test, known as the 3D-MOT or NeuroTracker, adjusts its own difficulty to match the skill of the user, by speeding up or slowing down the spheres. The task demands that volunteers can divide their attention between many moving targets, ignore distractions, and keep watch over a large visual field—all qualities that professional athletes rely on.

Faubert’s results were stark. The professional athletes not only started at higher speeds than the amateurs and non-athletes, but they showed the greatest improvements as they practiced.  And the amateurs, in turn, did better than the non-athletes—but only after some practice. “They were not necessarily better at doing this sort of thing to begin with but are better at learning to do it,” said Wilson, who suspects this indicates that athletes are better at visual learning because of their extensive training, as opposed to some innate visual ability. “Experience makes you a better learner, and this I think is a nice demonstration.”

However, Wilson and Faubert both want to see long-term studies that measure the visual learning skills of athletes over time, as they become more experienced.

Wilson also cautions that the 3D-MOT will not help agents to identify the next sports star. “There’s nothing here to say whether performance on this task predicts anything about future sporting achievement,” he said.