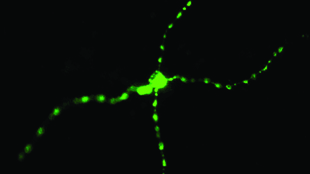 RIKEN BRAIN SCIENCE INSTITUTE, PER NILSSONPathological hallmarks of Alzheimer’s disease (AD) include the aggregation of amyloid beta (Aβ) peptides inside neurons and the accumulation of extracellular Aβ plaques. Previously, the mechanisms by which Aβ leaves neurons were unknown, and it has been controversial whether the intracellular or extracellular accumulation of Aβ plays a larger role in AD-associated symptoms. A paper published today (October 3) in Cell Reports shows that Aβ leaves neurons in an autophagy-dependent manner, and suggests that aggregation of intracellular Aβ contributes to AD pathology.

Per Nilsson, a research scientist at the RIKEN Brain Science Institute in Japan, along with his colleagues crossed mice deficient in autophagy in forebrain neurons with transgenic animals that produce abnormally high levels of the Aβ precursor protein. They found that the offspring had far fewer extracellular Aβ plaques than the transgenic mice that showed normal autophagy.

“This is an important paper, especially regarding Aβ metabolism,” said Zhenyu Yue, a professor of neurology and neuroscience at Icahn School of Medicine at Mount Sinai in New York, who was not involved in the work. Yue studies autophagy in neurodegeneration and said he was pleased by the paper’s finding that autophagy influences Aβ secretion. “It looks like autophagy plays a big role here. They did a great initial observation to really set a tone that we have to pay attention to another important part of autophagy.”

Nilsson and his colleagues also showed that, in the absence of autophagy, accumulation of intracellular Aβ led to neurodegeneration and memory impairment in the mice. Nilsson said that these findings are consistent with earlier reports “that intracellular Aβ is toxic, or is at least contributing to the toxicity” in neurons. “We have brought some light to the issue, but of course it is not known yet how the toxicity is mediated. That remains to be elucidated,” he added.

But the question of whether intracellular versus extracellular Aβ accumulation mediates the effects of AD remains contentious. “The field is divided,” said Nilsson.

Ralph Nixon, a professor of cell biology and psychiatry at New York University’s Langone Medical Center who was not involved in the study, said that the study “adds to the mounting evidence that intracellular Aβ is strongly pathogenic in [Alzheimer’s] disease.” Taken with other recent findings, the present study shows “that the accumulation within neurons is what actually kills the cells and is much more toxic that the stuff that gets out,” he added.

“What this study is telling us, too, is that one of the mechanisms that protects the cells is getting rid of the Aβ that’s in the cells and putting it outside the cell,” said Nixon, who studies the regulation of protein turnover in neurodegenerative disease. “Sure, it may still be toxic under those conditions, but the real toxicity is being generated by its accumulation and disruption of intracellular processes.”

Nixon, Yue, and Nilsson agreed that understanding the mechanism by which autophagy influences Aβ’s secretion will be an important future direction. “There’s the implication that this might be a conventional secretory pathway, but the evidence so far in this very nascent field of autophagy and secretion is that autophagy-related secretion is a non-conventional pathway,” Nixon said. “But the bottom line is that it’s very poorly understood.”