A pathologist describes his observations from examining the bodies of those who succumbed to the coronavirus.

ABOVE: A blood clot under the microscope
© ISTOCK.COM, JXFZSY

In mid-March, pathologist Sigurd Lax pulled on a water-repellant surgery coat, a surgical cap, special booties to cover his shoes, a respiratory mask, and two pairs of gloves, then walked into an operating room at Hospital Graz II in Austria. There before him lay a patient who died of COVID-19 only 48 hours earlier.

“COVID-19 is a new disease, and we really want to know what’s underlying it,” Lax says. There’s only one method to determine what causes illness and death. “It’s doing an autopsy.”

Methodically, Lax sliced into the patient, taking care not to spray any bodily fluids into the air. He’d waited two days to perform the autopsy to reduce the risk of transmitting SARS-CoV-2, the coronavirus that causes COVID-19. With little known about the illness at the time, he and his colleagues wanted to take extra precautions to avoid getting sick. Waiting 48 hours after death to perform the autopsy, however, didn’t rid the body of SARS-CoV-2 RNA.

“We don’t know if the virus is still infectious,” Lax says, but finding its genetic material lingering in the patient’s tissues prompted him to be even more cautious. This autopsy was the first of 11 he and his colleagues have performed on patients who died from COVID-19. In May, the pathologists’ published a paper in the Annals of Internal Medicine reporting what they’d found.

Lax, a professor of pathology at the Johannes Kepler University Linz, spoke with The Scientist about the results and what they reveal about possible therapeutics for COVID-19. 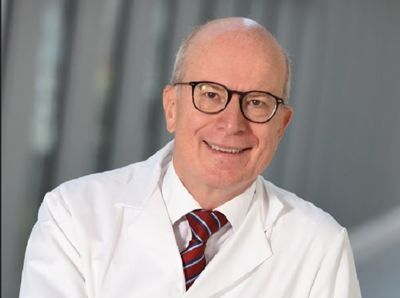 The Scientist: As you started performing these autopsies, what was most striking in terms of damage done to the body?

Sigurd Lax: Both lungs were symmetrically damaged, with damage to the alveoli, the tiny air sacs of the lungs. The pleurae, the double-lined membranes, surrounding the lungs showed very little inflammatory changes, a little fluid. Most cases had a strongly dilated heart, but the abdomen was not really involved. That was what we saw at first view.

TS: In your paper, you write that patients had blood clots in their small to mid-sized pulmonary arteries. What’s the significance of this finding?

SL: We saw an occlusion of multiple pulmonary arteries, usually in the periphery. There were some clots in the larger branches, but we think seeing more of them in the periphery means the clots are thrombotic rather than embolic. [Editor’s note: thrombotic clots develop in a blood vessel where there is damage, in this case in the lungs, while embolic clots form elsewhere, in a blood vessel in the leg, for example, and travel through body and become lodged in blood vessels of the lung.] And this concurs also with findings in pediatric cases, where you have occlusion of arteries in the fingers, for example, or necrosis in back, so in the skin on their back. So it’s not the pulmonary embolism which is the major cause of severe illness but the inflammation of the blood vessels and a change in the clotting system of the blood. And this causes occlusion of the pulmonary arteries, which increases the pressure of pulmonary circulation and then leads to an insufficiency of the heart to pump blood through the body properly.

TS: Does the virus cause the blood clots to form or is it the immune response to the virus that causes them?

SL: So far that’s not clear. I think one can speculate that either one or the other or both may be the reason, but I think it might be more the immune response, that inflammatory mechanisms lead to the thrombosis.

TS: When doing the autopsies, did you focus mainly on the lungs or were there other body regions that you also examined, such as the brain?

SL: In the first cases we only looked at the brain in one case, but we’ve done more autopsies since the paper came out and from those, the central nervous system doesn’t seem to be really specifically affected, at least grossly. I don’t have so far any microscopic data, but the analysis is ongoing.

TS: There have been reports that infection with SARS-CoV-2 could cause diabetes by leading to damage of insulin-producing cells. Was there any indication of that in the autopsies?

SL: Not really. I think there’s a coincidence with diabetes. I think that has to do with the vascular changes caused by diabetes.  . . . These patients due to their diabetes have atherosclerosis, then they have heart disease, and this aggravates the course of these COVID-19–associated pulmonary changes because, you know, when you have a strong heart, you will be able to overcome the infection, but if you have some associated disease, particularly heart diseases, you will undergo cardiac failure.

TS: What do your results say, right now, about treating COVID-19 patients with a severe form of the disease?

TS: Given the autopsy data and all of the information researchers are gathering on COVID-19, what are the biggest questions that have yet to be answered?

SL: What we really don’t know at the moment is how the virus goes through the body, what are the sequence of changes caused by the virus. That’s not completely solved.