A 34-year-old woman has given birth thanks to a new fertility procedure that involved collecting, maturing, and freezing some of her eggs five years earlier. Although lab-based maturation of eggs has been done before, the case study, published yesterday (February 18) in Annals of Oncology, represents the first successful pregnancy from immature eggs that were frozen after they were matured.

“We didn’t know whether or not the frozen eggs would survive and keep their potential to produce a pregnancy and live birth,” study coauthor Michaël Grynberg, head of reproductive medicine and fertility preservation at Antoine Béclère University Hospital in Paris, where the procedure was carried out, tells The Guardian. “It was a good surprise for us.”

The woman opted for a fertility preservation treatment after being diagnosed with breast cancer at 29 years old, as chemotherapy drugs can contribute to infertility.

The standard fertility intervention for women about to receive chemotherapy consists of a procedure in which doctors administer hormones to stimulate the ovaries to produce mature eggs and then remove and store those mature eggs for later use.

In this case, the use of these hormones was deemed too risky by the woman’s doctors as the treatment might worsen her cancer. The patient also did not want to undergo surgery to have part of her ovarian tissue removed, frozen, and re-implanted after her cancer treatment, given the invasiveness of the procedure.

So researchers at Antoine Béclère University Hospital removed immature eggs from her ovaries, matured them in the lab over the course of a couple of days, and then froze them in liquid nitrogen by a process called vitrification, in which cells are rapidly cooled down to avoid the formation of destructive ice crystals.

Several years later, the doctors thawed seven of the eggs, fertilized the surviving six with sperm injections, and implanted the one resulting healthy embryo into the patient. Her baby boy, Jules, was born last summer.

“Getting eggs to mature successfully after removal from the ovary has been a challenge, so this is a very welcome positive step,” the University of Edinburgh’s Richard Anderson, who was not involved in the work, tells Yahoo. “It isn’t widely available, but this report shows it can work, when time is very short.”

Since this patient’s case, two more women being treated for cancer have had the same procedure at the hospital and are now pregnant, Grynberg tells The Guardian. 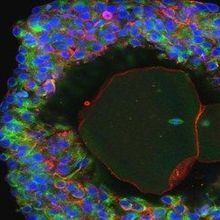