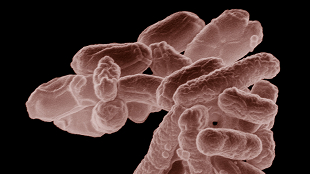 Escherichia coli bacteria.Wikimedia, Eric Erbe and Christopher Pooley of USDA.Vaccines were created to protect us from pathogens ranging from influenza and measles to smallpox, polio, and diphtheria. But vaccines to some pathogens—like HIV and the herpes simplex virus (HSV)—have repeatedly failed in clinical trials. In the lone successful HIV vaccine trial to date, the vaccine only provided slight protection over the placebo. And GlaxoSmithKline (GSK) reported last year that its promising HSV2 vaccine against genital herpes sputtered in a large, late-stage trial.

Most vaccines provide the immune system with key pathogen-derived molecules to help it later recognize and attack the same intruder. But many of the molecules are, by themselves, “not really capable of provoking strong immune responses,” explained Dennis Klinman, an immunologist at the National Cancer Institute.

One way to boost the effectiveness of a vaccine is to include adjuvants—extra ingredients that prompt the immune system...

Now, scientists are looking for new and better adjuvants to boost the effectiveness of novel vaccines—and give new life a few that have failed late stage trials, including GSK’s HSV vaccine. Specifically, researchers are turning to bacteria for their well-established role as immune stimulators. Different bacteria attack the body in different ways—and the immune system has evolved to distinguish infections and activate the most effective immune cells to fight the current invader. Adding appropriate bacterial components to vaccines for similarly infecting pathogens could be the answer vaccinologists have looked for, says Klinman. “[A bacterial-based adjuvant] tells the immune system it’s encountered something truly foreign and pathogenic,” stimulating a stronger immune response to provide better, longer-lasting protection against infection.

The first bacterial-derived adjuvant, approved for use in human vaccines in 2009, is a subunit of lipopolysaccharide (LPS), a molecule expressed on gram-negative bacteria. LPS stimulates strong—sometimes deadly—immune responses, but a subunit called monophosphoryl lipid A (MPL) can induce an immune response with little toxicity. Developed by GlaxoSmithKline, MPL is currently being used in GSK’s hepatitis B and human papilloma vaccines, and is being clinically tested with a range of other vaccines.

Given MPL’s success, the University of Texas at Austin’s Stephen Trent and his graduate student Brittany Needham decided to tweak lipid A to create a variety of adjuvants capable of stimulating different immune responses. Needham took her cue from the diversity of the LPS molecules expressed by different bacteria. Knowing that slight structural changes to LPS could alter immune cells’ cytokine responses, she began engineering Escherichia coli lines to express modified versions of lipid A. Testing her derivative lipid A subunits on LPS-sensitive cultured human monocytes, Needham found that each stimulated drastically different cytokines.

This could be the first step toward “designer” adjuvants, said Trent. “If you knew enough about the disease you want to try to cure, and you knew what pathways gave protection,” it could theoretically be possible to design the right adjuvant to maximize vaccine effectiveness, he speculated.

In addition to surface lipids, a handful of other bacterial structures, including toxins, bacteria-specific DNA sequences, and even whole commensal microbes (probiotics), are showing promise in activating pathogen-specific immune responses that bolster vaccines’ strength and longevity. One group of candidate adjuvants is enterotoxins, toxins made by gut-infecting bacteria like E. coli and cholera. Researchers think alum salt adjuvants have proven ineffective at boosting mucosal vaccine protection because they get washed away too quickly. Enterotoxins, on the other hand, bind to mucosal cells and increase gut permeability, and these toxins stimulate just the right kind of antibodies to fight mucosal infections—IgA.

Of course, whole enterotoxins are dangerous. The fact that they bind to the body’s mucosa is the reason infections with enterotoxin-carrying bacteria are so painful. So researchers have to modify the toxins before administering them to patients.

Nils Lycke and his colleagues at the University of Gothenburg in Sweden, for example, have developed an adjuvant called CTA1-DD that is derived from Vibrio cholerae’s deadly cholera toxin (CT). They attached a CT subunit to another protein from Staphylococcus aureus to create a non-toxic molecule that could have the same antibody stimulating properties as CT. Sure enough, mice vaccinated with an intranasal influenza vaccine plus CTA1-DD adjuvant produced mucosal IgA antibodies and were protected against death after flu infection. Lycke is hoping to start clinical trials of a CTA1-DD-boosted pandemic influenza vaccine soon.

Another possible adjuvant is bacterial DNA. Unlike human DNA, in which most cytosine–guanine pairs are methylated, so-called CpG sequences are often unmethylated in bacteria, tipping off the immune system to the presence of an invader. B cells and plasmacytoid dendritic cells, key fighters of viral infections, respond to CpG DNA.  Making synthetic mimics of CpG DNA could thus stimulate these cells to launch an immune response. Furthermore, CpG sequences are “fairly non-toxic, and used as adjuvants they tend to be safe,” said Dennis Klinman at the National Institutes of Health National Cancer Institute, who was one of the first to recognize CpG DNA’s immunomodulatory properties.

Among CpG DNA’s promising qualities is its apparent ability to encourage development of long-lived memory B cells—the cells that produce antibodies to fight a repeat infection. “To date almost every vaccine works because it induces strong antibody responses,” noted Klinman, but these often fade after several years and booster shots are required to provide long-lasting protection. By activating long-lived memory B cells, CpG DNA could help stimulate long-term antibody production.

In a recent Phase I clinical trial, pairing a CpG DNA adjuvant with the anthrax vaccine boosted volunteers’ immune responses to the vaccine. Compared to volunteers who received the standard vaccine, people injected with the CpG DNA-assisted anthrax vaccine generated about 8 times more anti-anthrax toxin antibodies and produced the strong antibody response about 3 weeks earlier. Several early phase clinical trials are also in progress to examine CpG DNA as an immune booster in cancer vaccines.

Some researchers are taking a more holistic approach to vaccine adjuvants. Probiotics—beneficial, not pathogenic, microbes—have become famous recently for their ability to help influence the immune system. Though many studies focus on probiotics’ ability to stave off an overactive immune response, it turns out they can also boost the immune system.

“Probiotics have a whole range of different effects,” including enhancing immune responses, noted Paul Licciardi, an immunologist and vaccinologist at Murdoch Children’s Research Institute in Australia. A 2011 trial of live attenuated influenza vaccine, for example, showed that more patients given a 28-day course of the patented probiotic Lactobacillus rhamnosus GG produced protective antibodies to seasonal flu than patients given the vaccine alone.

“It’s a bit early to really know how good probiotics are going to be,” said Licciardi, but it’s an enticingly easy solution: simply give infants probiotics in yogurt or water during their vaccine course. Probiotics could “enhance general immunity,” said Licciardi, who is planning a small, placebo-controlled pilot study to give children oral probiotic supplements during a course of the vaccine for pneumococcal infection, “but maybe also to target specific immune responses.”