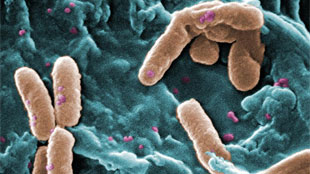 Pseudomonas, one of the bacteria groups that have transferred genes to humans. CDC, JANICE HANEY CARRA team of scientists from the University of Maryland School of Medicine has found the strongest evidence yet that bacteria occasionally transfer their genes into human genomes, finding bacterial DNA sequences in about a third of healthy human genomes and in a far greater percentage of cancer cells. The results, published today (20 June) in PLOS Computational Biology, suggest that gene transfer from bacteria to humans is not only possible, but also somehow linked to over-proliferation: either cancer cells are prone to these intrusions or the incoming bacterial genes help to kick-start the transformation from healthy cells into cancerous ones.

“It really does seem that human genome sequence data from somatic cells show signs of LGT events from bacteria, and so do cancer cells,” said Jonathan Eisen from University of California, Davis, who...

The trillions of bacteria in our bodies regularly exchange DNA with each other, but the idea that their genes could end up in human DNA has been very controversial. In 2001, the team that sequenced the first human genome claimed to have found 113 cases of such lateral gene transfers (LGT), but their conclusion was later refuted.

This high-profile error “had a chilling effect on the field,” according to Julie Dunning Hotopp who led the new study. Although her team has since found several cases of LGT between bacteria and invertebrates, “it’s still difficult to convince people that it may be happening in the human genome,” she said.

Rather than looking for bacterial genes that had become permanent parts of the human genome, Dunning Hotopp’s team searched for traces of microbial DNA in somatic cells—the cells of the body that do not form gametes.

Lab members David Riley and Karsten Sieber scanned publicly available data from the 1000 Genomes Project and found more than 7,000 instances of LGT from bacteria, affecting around a third of the people they studied. When they analyzed sequences from the Cancer Genome Atlas, they discovered 691,000 more instances of LGT 99.9 percent of these came from tumor samples rather than normal tissues.

Acute myeloid leukaemia cells were particularly rife with bacterial sequences. A third of the microbial genes came from a genus called Acinetobacter, and had been inserted into the mitochondrial genome.

Stomach cancer cells also contained lots of bacterial DNA, especially from Pseudomonas. Most of this DNA had been inserted into five genes, four of which were already known to be proto-oncogenes that can give rise to cancer, emphasizing a possible link between LGT and cancerous growth. “Finding these integrations in multiple individuals, as well as in the proto-oncogenes, really spoke to how significant this might be,” said Dunning Hotopp.

“We know already that a significant proportion of cancers are due to insertion of genetic material from viruses,” said Etienne Danchin from the French National Institute for Agricultural Research, who reviewed the paper. “But this is the first time, as far as I know, that HGT from bacteria could be suspected as a cause of cancer.”

However, Dunning Hotopp is very clear that her results tell us nothing about whether the inserted bacterial DNA contributed to causing the cancers, or were just along for the ride. To get at the question of causation, researchers could deliberately add bacterial DNA into the same sites within human cell lines to see if they turn cancerous, she said. But even if the bacterial LGT can initiate over-proliferation, it would be hard to prevent such transfers with antibiotics. “You don’t know when these transfers occur, and you can’t give people antibiotics their entire life,” said Dunning Hotopp. “A vaccine would be nice, but that is assuming these are causative.”

“LGT is incredibly important in evolution but many claims of specific cases of LGT have been seriously flawed,” said Eisen. “I came into this as a serious skeptic. It just seemed so improbable.”

But the team won him over. They ran an extensive set of checks to make sure that these bacterial sequences were not laboratory artifacts and had not come from contaminating microbes.

For example, they showed that LGT was more common in cancer cells than healthy tissue, and two out of ten cancer types were particularly hard hit. If the bacterial integrations were artifacts of the methodology, it should be equally common in any tissue sample. The team also focused on sequences with high coverage—that is, those which had been read many times over. When the team found evidence of LGT, it was consistent across all of these reads. “In the end, the authors addressed every single question that I and the reviewers raised,” said Eisen.

Hank Seifert from Northwestern University, who was not involved in the study, remains cautious. “This paper is very interesting and potentially important,” he said. “However, until the direct analysis of specific tumor cells can be performed to validate that these are real events, this work [is] still speculative.”

But Dunning Hotopp’s team cannot do these validation studies herself. For privacy reasons, they cannot access the original tumor samples that their data came from. “People with access to the samples need to validate that the integrations are correct,” she said.

Danchin agrees that the results need to be validated but said, “I am personally convinced what they have found by screening the different databases is true. I think LGT happens much more frequently than we imagine but, most of the time, is just not detectable.”