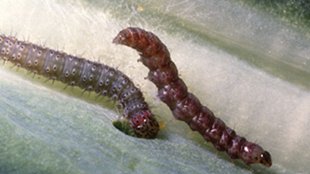 Toxin-producing strains of Bacillus thuringiensis bacteria are virulent pathogens of cabbage-eating caterpillars. But strains that don’t produce toxins are also able to infect the insects, by piggy-backing on the hard work of their toxin-producing brethren. A paper published today (July 5) in Science describes the first field observations of this freeloading behavior and the relationship dynamics between the exploiting and exploited bacteria—information that could lead to more effective caterpillar-killing biopesticide approaches, and that might even have implications for human health.

“It is really interesting and important because it shows for the first time in a natural host-pathogen system that social interaction is important for understanding the evolution of pathogen virulence,” said Jeff Smith of Washington University in Saint Louis, who did not participate in the study. “It also shows that bacterial pathogens have problems with cheating.”

Bacterial pathogens release all manner of chemicals that can improve their food acquisition, virulence,...

“There was some skepticism in the microbial community about how important this [phenomenon] is in a natural environment,” said Ben Raymond, an evolutionary ecologist at Royal Holloway University in London. So, Raymond and his team decided to take their experiments out into the field—literally.

They planted 204 cabbages at a farm near Oxford, United Kingdom, added 35 diamondback moth larvae to each, and sprayed the plants with fine mists of B. thuringiensis bacteria that differed in the proportion of virulent to non-virulent strains. For 8 weeks, the researchers analyzed the bacterial populations on the plants, and found that when the virulent strain was uncommon, the non-virulent cheaters were less capable of infecting the caterpillars, and the relative abundance of non-virulent strains decreased over time. The team also exposed caterpillars to the bacteria in the lab, observed the infections, and found that with lower proportions of virulent bacteria, fewer caterpillars died.

The results point to a clear risk of cheating: if there aren’t enough virulent bacteria around to produce the necessary toxins, the cheaters will perish without infecting a host., On the other hand, it is metabolically costly to produce toxins, explained Raymond, as evidenced by slower growth rates of virulent strains. As a result, once the bacteria get inside a host, the cheaters dominate. Indeed, when the bacterial mists contained a higher proportion of the virulent strain, the cheaters tended to thrive and out-competed the virulent bacteria.

“The way that toxin producers and non-producers compete in the field implies a stable co-existence,” said Raymond. This is precisely what the previous laboratory experiments have suggested. “The predictions of the theory, basically, held up in a field situation, with cabbages and dirt and all the noise and chaos,” he said.

B. thuringiensis are used by some farmers as an environmentally-friendly biological insecticide. Thus, the results suggest “that you have to be really careful about not including the non-toxin producing kind, because those could mitigate the effects of biocontrol,” said Smith. As the non-virulent bacteria outcompete the toxin-producing strains in the host, the population is less able to infect more pests. “Having just a little bit of the non-producing strain could have an outsized detrimental effect,” Smith said.

The findings may also have implications for human diseases, added Sam Brown of the University of Edinburgh in the U.K., who was not involved in the study. Many bacteria that are pathogenic in humans exhibit similar toxin sharing behavior. “If we can understand the social interactions between toxin producers and non-producers, this can open new therapeutic angles,” he said.

Brown is researching whether bacterial cheaters could be used as “a therapy of last resort” in people infected with antibiotic-resistant bacteria, for example.  If researchers can genetically engineer bacterial strains to be stripped of all their virulence factors, they may be able to outcompete the virulent antibiotic-resistant strains in patients. People are dying from such infections everyday, he said, “so we need to start thinking of more off-the-wall treatment ideas.”