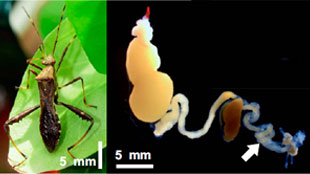 A bean bug, and its digestive system, showing where the symbiotic bacteria live. KIKUCHI ET AL

Japanese scientists have found that the bean bug, a major pest of soybean crops, swallows bacteria that break down an insecticide chemical. The bacteria allow it to continue munching on treated crops will no ill effects, according to a study published today (April 23) in the Proceedings of the National Academy of Sciences.

Insecticide resistance typically takes many generations to evolve, usually because tweaks to the insects’ own genomes. But the bean bug’s strategy allows it to acquire such resistance with unprecedented speed by exploiting the genes of bacterial partners.

“It makes perfect sense,” said Nancy Moran, an evolutionary biologist at Yale University, who was not involved in this study. “Bacteria have a much greater diversity of enzymatic functions than do animals.”

While the phenomenon may fascinate many biologists, it is bad...

As nymphs, bean bugs swallow Burkholderia bacteria from the surrounding soil. Though the details of the relationship between the species are unclear, one bug can harbour up to 100 billion of these microbes inside a special organ in its gut. Infected bugs grow bigger than their uninfected peers.

Some Burkholderia strains can break down the insecticide fenitrothion for their own nourishment. In doing so, they render the chemical harmless to insects. These strains are normally so rare as to be undetectable, but Yoshitomo Kikuchi from the National Institute of Advanced Industrial Science and Technology in Japan found that they can increase rapidly in soils that are treated with fenitrothion, comprising some 80 percent of Burkholderia populations after just 1 month.

If bean bugs swallow these fenitrothion-degrading strains, they gain immediate resistance to the pesticide. In the lab, more than 70 percent of the bugs that ate fenitrothion-degrading Burkholderia survived a meal of seeds laced with the pesticide. Only 10 to 20 percent of bugs that ate normal Burkholderia strains could tolerate such exposures. “Now we are investigating how the symbionts confer insecticide resistance,” said Kikuchi.

Unlike many bacterial partners, which are passed down from mother to offspring, every bean bug must pick up its own microbes anew. This might seem inefficient, but “there can be benefits to an open-source symbiosis, in which the insect gains the bacterium from the environment in each generation,” said Hunter. Namely, it prevents the bacteria from becoming so dependent on their hosts for survival that they lose important genes. Free-living bacteria thus have wider sets of metabolic abilities, and may be more likely to carry genes that allow them to detoxify chemicals like insecticides.

Pesticide resistance from bacterial symbionts may also occur with other insects and other insecticides. Kikuchi found that Burkholderia strains that break down fenitrothion can also degrade three other insecticides, for example. These bacteria also form alliances with many species of stinkbugs, a family that includes many important crop pests, including the sugarcane-eating oriental chinch bug. On the remote island of Minami-Daito, where fenitrothion is heavily used, the team found that 8 per cent of chinch bugs were resistant to the pesticide because of Burkholderia in their guts.

However, farmers on the Japanese mainland spray very low levels of fenitrothion. After surveying 13 different locations, the team could not find any bean bugs that harbour the resistant bacteria. “The jury is still out on whether this is really going to be an important issue in determining efficacy of different insecticides,” said Moran, “but it certainly seems worth knowing more.”