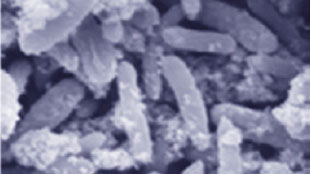 Japanese researchers have found that two species of bacteria can use minerals in the soil to transfer electrons over long distances, according to research published today (June 4) in Proceedings of the National Academy of Sciences. This creates currents between the species, and turns them into living electrical grids, allowing them to cooperate in breaking down chemicals in their environment that they could not metabolise individually.

The result is a “big step” towards acceptance of the electron as a key element of bacterial life, said Lars Peter Nielsen from Aarhus University, who was not involved in the study. “Microbial electron transfer is no longer just an exotic and marginal topic, but making its way to mainstream microbial ecology.”

Relays of electrons are the stuff of life. When organisms respire, they rip electrons from food and donate them to electron acceptors like oxygen, releasing energy...

But such routes can only shuttle electrons over micrometer-long distances, and cannot explain how bacteria from sediments in the ocean floor can transfer electrons over centimeters, as Nielsen discovered in 2010. Those within the sediment, a few centimeters down, “eat” hydrogen sulphide, stripping away the molecule’s electrons. Those at the surface then shunt the electrons onto oxygen in the water.  But how the electrons got from the buried bacteria to the cells on the surface was unclear.

One idea, first suggested in the 1960s, was that conductive minerals in the sediment might channel the electrons over longer distances. Now, Kazuya Watanabe from the Japan Science and Technology Agency in Tokyo and his colleagues have found the first direct evidence to support this hypothesis.

Kato found that the reactions transpired only when he added nanoparticles of magnetite—a conductive iron oxide—to the mix. The magnetite particles were clearly shuttling electrons from one species to another, allowing them to cooperate by linking their metabolisms. “The conductive minerals are like natural wires,” Watanabe said.

“This is a great paper,” said Gemma Reguera from Michigan State University, who did not participate in the work. “It provides, for the first time, the biological evidence that was needed to demonstrate the role of conductive minerals in interspecies electron transfer.”

Watanabe thinks that minerals like magnetite are the main route through which microbes move electrons over long distances. While bacteria would need to spend a lot of energy to build a network of nanowires, conductive minerals are already very common in soils and sediments. With enough of them, Watanabe thinks that the bacterial electric grid could be essentially “unlimited.”

“I find it difficult, however, to imagine that conductive mineral grains scattered in natural sediment are close enough to one another to make a conductive network,” noted Nielsen, who thinks that the grains would have to be structured somehow.

Perhaps the bacteria themselves are doing this. As Reguera pointed out, G. sulfurreducens can produce magnetite nanoparticles by oxidizing other iron minerals, creating the very minerals that allow them to wire up to other nitrate-reducing bacteria. “In this manner, they can ‘access’ an electron acceptor that their own metabolism could never use for growth,” she said. “Some smart solution!”

The results could inform ongoing efforts to use bacteria electron transfers to power fuel cells, or to break down toxic chemicals, Watanabe said. “If our finding can be applied to these processes, overall performances could be much greater than they are now.”