Scientists have identified the first known instance of bacterial transfer of cell surface proteins through direct contact, they report in Science this week. Such protein sharing in Myxococcus xanthus helps mobile bacteria get immobile mutants moving, Dale Kaiser at Stanford University in California and colleagues found.

"The genome for Myxococcus has recently been finished, and they actually have a very large number of outer membrane lipoproteins," Kaiser told The Scientist. "An as-yet unknown number of these are transferable."

M. xanthus is a rod-shaped, soil-dwelling bacterium that uses a pair of mechanisms to move. At the trailing end of the organism the A motility engine extrudes slime that pushes the bacteria forward, while at the leading end the S engine projects type IV pili, which pull the bacteria ahead.

M. xanthus with mutant Tgl, an outer membrane lipoprotein involved in the S engine, have slime extrusion but lack pili. Kaiser and colleagues reported in 1977 that tgl mutants that make transient contact with wild-type donor bacteria can restore pili and S motility.

In the current study, the group developed a tgl mutant that also lacked A motility, making it completely immobile, and engineered either donor or recipient cells to express green fluorescent protein in their cytoplasm. After 36 hours of exposure to wild-type M. xanthus, immunoblots revealed roughly equal Tgl levels in donor and recipient cells. PCR amplification for tgl confirmed that recipient cells lacked the gene.

Kaiser and colleagues conducted similar experiments with CglB, one of five A motility outer membrane lipoproteins. Immunoblots revealed CglB mutants recovered the protein after contact with wild-type cells. Kaiser expects the other four A motility lipoproteins get transferred also.

"To make one of these motility engines, you need many copies of the individual proteins," Kaiser said. "So we think Myxococcus evolved this so it could reverse rather frequently."

"If this was some rare event with trace amounts of membrane proteins sloughing off from one cell onto another, that wouldn't be surprising. But the fact this looks like much more movement of material between cells is very surprising and interesting, and makes you suspect this is not some oddity with a mutant but a normal thing the cells do all the time," Mark McBride at the University of Wisconsin-Milwaukee, who did not participate in this study, told The Scientist.

In future experiments, researchers could label the outer membrane to see how much of it the bacteria share, said Patricia Hartzell at the University of Idaho in Moscow, who did not participate in this study. Moreover, "in the future, I would like to know if the donor cell activates expression of the gene encoding the donated protein," Hartzell told The Scientist. "There may be a regulatory feedback by which a cell donates its protein to another cell, then begins to produce more of the protein."

Gram-negative pathogens such as Pseudomonas aeruginosa also possess type IV pili. "It would be interesting to see if they're exchanging outer membrane lipoproteins, and if that contributes to their motility and virulence," Lee Kroos at Michigan State University at East Lansing, who did not participate in this study, told The Scientist. "This might also have implications for the formation of biofilms."

Moreover, Hartzell is interested in whether such protein transfer happens in eukaryotes. "I think that this type of sharing is probably more widespread than we think and it is an obvious mechanism for signaling between cells," she said. 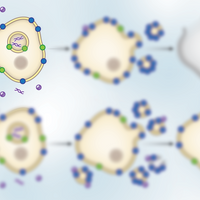