Patients with acute myeloid leukemia who relapse after stem cell transplantation have just a small chance of survival: doctors can give them additional donor T cells to fight the cancer, but only about 20 percent of patients go back into remission. Scientists didn’t know why these T cells aren’t working against AML, but a paper published in Science Translational Medicine on October 28 uncovers the mechanism, as well as a simple, inexpensive treatment that can reactivate them: sodium bicarbonate, otherwise known as baking soda.

“This is an elegant study,” says physician-scientist Nataliya Buxbaum, who researches T cell metabolism at the National Cancer Institute and who wasn’t involved in this study. “Relapsed AML is very difficult to treat, so if something rudimentary, like sodium bicarb, which is available at every hospital, can augment the immune response, it’s certainly interesting.”

AML is a disease that attacks the blood-forming cells of the bone marrow, and physicians treat it with chemotherapy to kill the leukemia cells. But if a high dose of chemotherapy is required, it can destroy the bone marrow, and the patient will need a stem cell transplant to generate new blood-forming and immune cell–forming cells. The donor T cells from the transplant recognize the leukemia cells as foreign and attack them, a phenomenon known as graft-versus-leukemia effect, which, along with the chemotherapy, can send the patient into remission.

If the leukemia comes back even after these procedures, patients can receive a donor lymphocyte infusion of additional T cells, but it is rarely successful. Robert Zeiser, a transplant physician at the University of Freiburg in Germany, wanted to see whether leukemia cells alter T cell function, so he examined T cells from patients with AML after stem cell transplantation, when the AML was in remission, and after subsequent relapse. He found that relapsed patients’ T cells had reduced glycolysis and oxidative phosphorylation, and less cytotoxicity. In other words, their metabolism and ability to kill other cells was diminished.

Zeiser moved his experiments into AML mouse models, where he found that genes involved in glycolysis were down-regulated in mouse T cells cultured with AML; the cells also had reduced metabolic fitness and proliferation. Transferring T cells previously exposed to AML into AML mice couldn’t get rid of the leukemia, whereas T cells not exposed to AML did attack the leukemia, showing that AML cells release some factor that reduces T cells’ ability to fight leukemia.

The team used magnetic resonance imaging and mass spectrometry to identity possible metabolites from the leukemia cells that could have caused the changes in T cell function. After five years testing various metabolites, one candidate rose to the top: lactic acid (LA). LA was elevated in AML cultures, and also in patients with AML relapse after stem cell transplantation, but not in the same patients during remission. To test lactic acid’s effect on T cells, they added it to T cell culture and saw it reduced the activity of glycolysis-related enzymes, damaged T cells’ ability to proliferate, and reduced their capacity to kill leukemia cells. 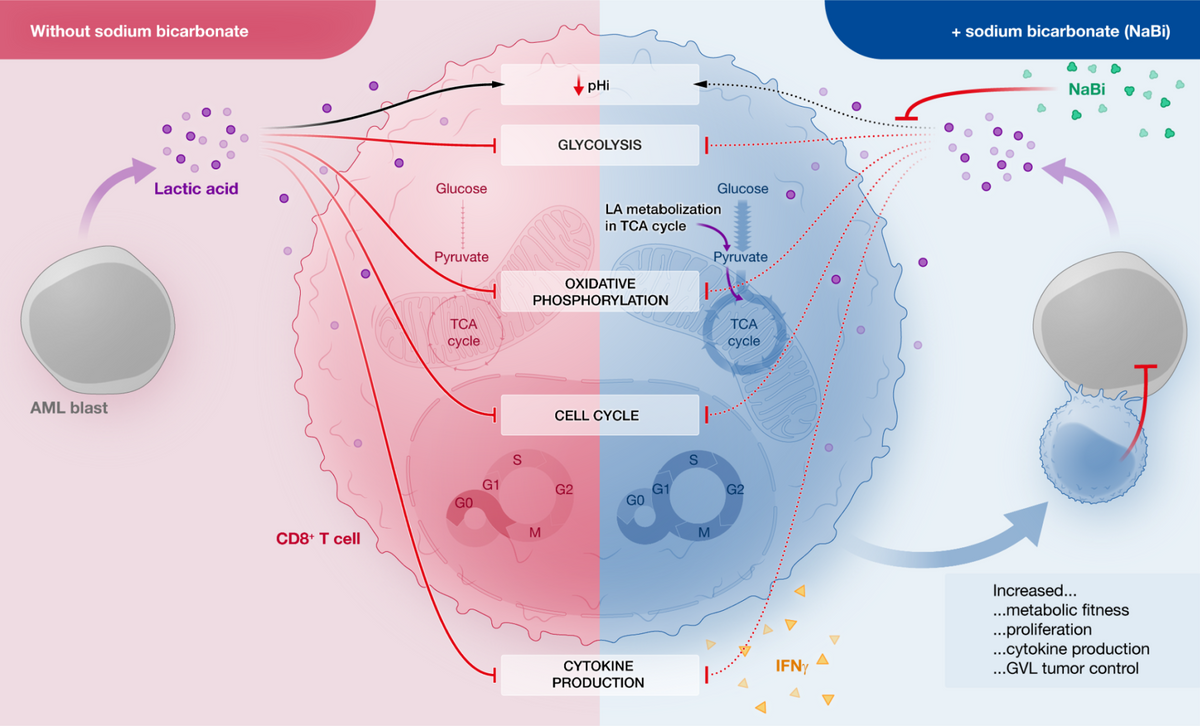 “Lactic acid paralyzes the T cells, and that helps the leukemia cells to escape from the control by the immune system,” says Zeiser. He says it’s not clear which comes first, the relapse or the lower pH caused by excess LA.

Zeiser tried a few different buffers to see whether they reduced acidosis, including sodium bicarbonate (NaBi), which is used to counteract metabolic acidosis caused by a variety of reasons, such as diet, diarrhea, or poor kidney function. Zeiser and his colleagues found that adding NaBi to T cells treated with lactic acid reversed the effects of the lactic acid: the T cells’ metabolism and proliferation were restored, and the low pH inside the cells was returned to normal. When they added NaBi to the drinking water of mice with AML and transplanted additional T cells after a stem cell transplant, the animals lived longer. When they added NaBi to healthy human T cells challenged with lactic acid, glycolysis was restored.

Zeiser and his team prescribed an oral NaBi treatment for one week to 10 AML patients receiving a donor lymphocyte infusion after they experienced a relapse following a stem cell transplantation. They found that the recipients’ blood was less acidic than before the baking soda treatment, and that T cell metabolism improved. In addition, the T cells “produced more cytokines and they were more aggressive against leukemia cells after the treatment,” says Zeiser.

The team is preparing for a larger clinical trial of the treatment to look at patient outcomes, which they didn’t report in their study. Richard Stone, a physician who studies leukemia at Dana-Farber Cancer Institute in Boston, asks, “What level of sodium bicarbonate needs to be provided to the patient to decrease the relapse rate? How long does it have to be given, what would be the side effects? The devil is in the details. Is it specific to certain genetic subtypes? AML is very heterogeneous, and one person’s AML is not another person’s AML.” Still, he says, “I think it’s very intriguing.”