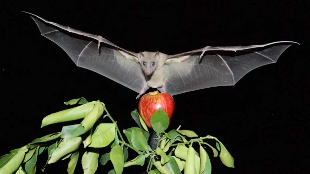 An Egyptian fruit bat (Rousettus aegyptiacus), the species in which Finkelstein et al. discovered new head-direction neurons that form 3-D neural compasses used to represent spatial orientation.YOSSI YOVELBats possess a complex neural compass that tracks their movements as they expertly crawl or fly through their environment, according to a study published this week (December 3) in Nature. Arseny Finkelstein, a PhD student at the Weizmann Institute of Science in Rehovot, and colleagues used a newly developed tracking device to monitor the head angles of naturally behaving Egyptian fruit bats (Rousettus aegyptiacus) while recording electrical impulses from single brain cells.

Finkelstein told The Scientist that acrobatic bats were ideal models to examine in search of a complex, mental compass. “Because there are such masters of 3-D space, we saw that if we want to start understanding and try to analyze the neural components...

The researchers discovered that the bats have the head-direction sensing cells—which respond to directionality in the horizontal plane, or azimuth—scientists discovered three decades ago in rodents. But the team also found new types orientation cells: ones that responded to pitch, or vertical orientation, roll, or tilt to the left or right, plus cells that responded to combinations of those orientations. All of these cells combine to encode a doughnut-shape—or toroidal—compass within bats’ neural substrates that help them orient themselves in space as they perform impressive aerial feats, often in dim or lightless conditions.

“We’re extremely high on this study,” said David Rowland, a postdoc in the lab of May-Britt and Edvard Moser at the Kavli Institute for Systems Neuroscience at the Norwegian University of Science and Technology. The Mosers shared a Nobel Prize this year recognizing their contributions toward the discovery of “grid cells,” neurons that help mammals generate a coordinate system to navigate their surroundings. Unlike bats, rodents tend to operate in more two-dimensional space. “[Finkelstein et al.] opened up this head direction system from two to three dimensions, which is obviously a huge step forward for our field,” Rowland added.

Finkelstein and his colleagues determined that the bats they studied had neurons in the hippocampal–parahippocampal region of the brain that work together to form a representation of 3-D space that the animal then uses to sense where and how its body is positioned within that space. Implanting miniature electrodes thinner than human hairs into the brains of bats who were allowed to crawl or fly through experimental arenas, the researchers recorded nervous impulses from new components—pitch cells, roll cells, and cells that respond to combinations of orientation information—used to build this mental compass. And the picture of that compass that emerged looked more toroidal—or doughnut-shaped—than spherical. Combining inputs from all the different types of cells, bats maintain a toroidal representation of 3-D space, allowing them to more accurately track their position as they flip, spin, and bank through their habitats. This more intricate 3-D compass may set bats apart from rodents, which tend to become more disoriented when flipped upside down, for example. “[Bats] are more similar to primates than to rodents,” Finkelstein said.

The results serve to supplement researchers’ growing understanding of how the mammalian brain integrates complex packets of information about the world. “A 3-D compass is a difficult thing to construct because movements in 3-D are complicated to process—rotations in the different planes interact and it matters in which order the rotations occur and are processed,” wrote behavioral neuroscientist Kate Jeffery of University College London in an e-mail to The Scientist. “This is a complicated integration problem and we have no idea yet where or how this occurs. Finding out could shed light on a number of important areas in neuroscience—how  sense of orientation is maintained through complex 3-D movements, how sensory signals are integrated (which may have more general applicability), how inertial signals are integrated with spatial signals, and how a 3-D spatial map can be built up.”

Meanwhile, in a Current Biology paper published today (December 4), researchers from Tel Aviv University show that three species of fruit bats that were once considered to rely primarily on vision and not echolocation for navigation do produce clicks from their wings that they use to perform a more rudimentary version of echolocation.

“It’s really interesting,” said Nancy Simmons, a bat evolutionary biologist at the American Museum of Natural History in New York who reviewed the paper prior to publication but was not involved in the study. “More or less it’s been assumed that the whole family were not echolocating bats.”

When neuroecologist Yossi Yovel and his postdoc Arjan Boonman trained sophisticated recording equipment on fruit bats released in a completely darkened room, they heard audible clicks from the wings of the flying animals. “When we released these bats in this really dark room, they did something I had never heard before,” Boonman said. What’s more, Eonicturis major, the cave-dwelling species the researchers observed, clicked its wings louder and more than the species in their study that frequent forests and other comparatively more well-lit environs.

To show that the bats were actually using the audible wing clicks to echolocate, the researchers trained the animals to land on a solid surface and not on a less-firm surface constructed of cloth. The bats could accurately discern, even in a dark room, the nature of the two surfaces and used their wing clicks to navigate to the appropriate perch. Yovel and Boonman also excluded other modes of producing the clicks—such as with the larynx or tongue—by running trials in which the bats’ mouths were sealed, and ones in which their tongues were anaesthetized. The only way the scientists were able to limit the clicks coming from the fruit bats was to in some way impair their wing beats.

The findings indicate that echolocation, long considered to be a highly complex physiological trait, may have some more rudimentary precursors. While a solid model for the evolution of the sophisticated laryngeal echolocation employed by microbats remains elusive, this research adds a new piece to the puzzle by indicating that simpler echolocation may play a role in that evolution. In addition, the three species observed by Yovel and Boonman are a good evolutionary representation of the 59 or so species that make up the family of Old World fruit bats, indicating that the tactic is likely used widely throughout the family. Brock Fenton, a bat biologist at Western University in Ontario who wasn't involved with the research, said that the findings may add echolocation to the list of widespread adaptations that were evolved many times in several different groups. “Echolocation, now we know, is sort of like venom,” said Brock Fenton, a bat biologist at Western University in Ontario. “It crops up all over the place.”

Yovel and Boonman said that they are still surprised to have found that bats typically considered to be non-echolocators actually do employ the strategy. At the outset of their study, the researchers even placed a wager about the outcomes, Yovel betting that the bats did produce wing clicks and that the sounds were functional. “[Boonman] still owes me a very expensive dinner,” he said.

Both the study on bats’ 3-D mental compass and the fruit bat paper raise intriguing questions about the somewhat mysterious animals. Do different bats encode 3-D space in different ways? Is the compass hard wired or built and refined through development? How do fruit bat wings produce clicks? How do their brains sense and process those sounds?  How did echolocation evolve in bats? As these questions remain for future work to answer, Yovel is wagering that there will be some crossover between the two lines of inquiry. “I’m quite sure that the cells described by Finkelstein exist in our bats too,” he said. “I’m willing to bet an expensive meal on that, too.”