Scavenger worms have crawled the Earth for 100 million years. From bone-eating worms that fed off plesiosaurs to today’s mealworms and maggots that feast on decaying organic matter in the backyard, their diets have moved with the times.

As we find ourselves in the midst a plastic pollution crisis, scientists have tested feeding so-called superworms, the larvae of Zophobas atratus, Styrofoam, a type of polystyrene. Not only were the worms able to eat the material as their sole diet, but the researchers found that their gut microbiota degraded the polystyrene and converted the complex substance into carbon dioxide, according to findings published March 15 in Science of the Total Environment.

The research builds on previous studies that found wax worms and mealworms were also able to eat plastic.

“It’s really interesting now that we’re seeing multiple small insects that can eat and degrade polystyrene, as well as a few other types of plastics like polyethylene,”says Anja Malawi Brandon, a PhD candidate in civil and environmental engineering at Stanford University who was not involved in the study. “This is interesting because it’s starting to paint a picture about what evolutionarily is allowing this to happen. A lot of these insects, such as superworms or mealworms . . . developed over time to be scavengers and eat and break down all sorts of materials that they found, including wood-based material,” which is difficult to degrade.

An estimated 359 million tons of plastic were produced globally in 2018, including 33 million tons of polystyrene, according to the authors. Polystyrene is particularly difficult to biodegrade due to its recalcitrant macromolecular structure. The material is often discarded without recycling, making it one of the major plastic debris accumulated in the environment.

Several years ago, researchers from the School of Life Science, Beijing Institute of Technology in China studied larvae of the mealworm beetle, Tenebrio molitor, and reported that the worms were able to degrade and mineralize Styrofoam, confirming that the gut bacteria broke down the polystyrene.

In their latest project, the team turned to superworms, a name indicative of their impressive size and large appetite. They wanted to see if the superworm was also capable of digesting and breaking down Styrofoam. At 3–6 cm long, the larvae are four times the size of mealworms, which could mean they’d be effective plastic scavengers. Indeed, when the worms were fed polystyrene, the average consumption rate was about 0.58 mg per day, which was four times more than what the mealworms had eaten.

The team fed one group of superworms Styrofoam as their sole diet and another group a normal diet of bran over a 28 day period. To test how the worms digested the polystyrene, the researchers analyzed the frass, or excrement. Using gel permeation chromatography and two types of spectroscopy, the group found that the worms had depolymerized the long-chain polystyrene molecules into low molecular-weight products.

The researchers also put the superworms in two different glass incubators, one with those that had been fed Styrofoam and another with worms that had not been fed anything. The incubators were sealed with rubber stoppers and filled with compressed air lacking carbon dioxide. The scientists collected any carbon dioxide that was produced and subtracted the amount made by the unfed worms from that of the Styrofoam-eating worms. A respirometry test showed that the superworms had converted 36.7 percent of the ingested Styrofoam into carbon dioxide.

The superworms’ microbiota contributed to the Styrofoam’s breakdown. The team used antibiotics to suppress the worms’ gut microbiome and reported that this inhibited their ability to degrade the plastic.

“It is definitely exciting to think about how we could harvest bacteria from these [worms’] guts, grow them in isolation from the insects, and then get them to degrade plastics a little bit more broadly,” says Brandon.

In their paper, the researchers in Beijing write that they hope their findings could “open a new way for harnessing mealworms to degrade . . . other types of [materials], such as polyethylene or rubber.” In particular, this type of research could guide the search for an enzyme from these worms’ guts that degrades plastic and that could be scaled up and commercialized.

Yu Yang, who led the Beijing group, is working towards this goal. “Now we are isolating a few bacteria from the gut of superworms and testing their plastic-degrading capability,” he tells The Scientist in an email.

“I’m very hopeful that we will identify the enzymes capable of [degrading the plastic] and eventually develop a biotech tool kit,” agrees Federica Bertocchini, a developmental biologist at the Margarita Salas Center for Biological Research in Madrid, Spain, who was not involved in the study.

Mealworms and superworms are often used as a pet food for animals such as birds and reptiles, due to their high protein and fat content. In December, Brandon and her colleagues found that mealworms were able to eat polystyrene that included a common toxic flame retardant, hexabromocyclododecane (HBCD), and still serve as a safe food for other animals. The team found that mealworms fed HBCD-laden polystyrene were just as healthy as the worms that had a normal diet, and the shrimp that ate the polystyrene-fed worms were healthy as well. She says she and her colleagues were shocked by the results, as they had suspected that chemicals such as HBCD would bioaccumulate in the shrimp.

Whether these scavenger worms have evolved and adapted to their surroundings to consume new materials or whether they’ve had such abilities to digest plastics all along is unclear. “It could just be fortuitous that these insects already had an enzyme that could start that process,” says Brandon. “Plastic represents a lot of energy. They have a lot of carbon and energy for whatever bacteria or organism out there that can access it. So it makes sense that there could be some sort of evolutionary drive to break down these high energy, dense products.” 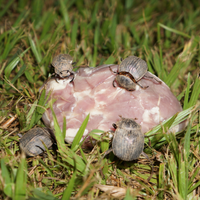 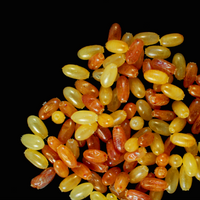