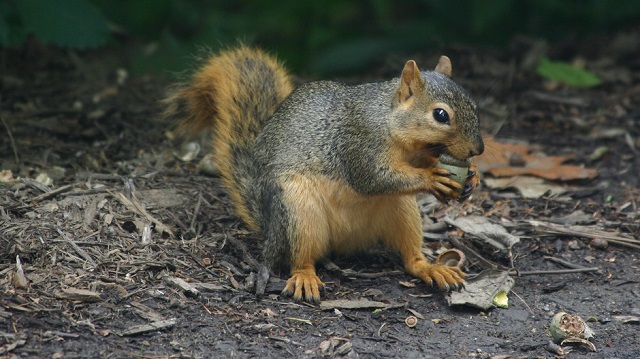 Fox squirrels appear to use complex food assessment strategies, according to a study published last month (March 26) in PLOS One. A team led by the University of California, Berkeley’s Mikel Delgado studied squirrels on the campus. Although their behaviors seemed scattered, the squirrels evaluated the values of food resources differently based on nut type and season. The animals flicked their heads or pawed the nut to assess its value.

For one set of experiments, the researchers gave 23 campus squirrels a series of hazelnuts and peanuts. Hazelnuts are larger and store better, but peanuts have more calories and protein per nut. During lean summers, the squirrels ate most of the peanuts and cached more of the hazelnuts. In the bountiful fall season, however the squirrels cached the most of both nuts. Head-flicking indicated they were more likely to store their nut, while and pawing...

“Think of them as little bankers depositing money and spreading it out in different funds, and doing some management of those funds,” Delgado said in a statement. 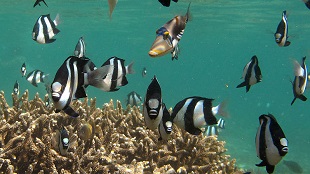 Reef-dwelling species of damselfish and cardinalfish living near natural carbon dioxide (CO2) seeps and continuously exposed to the compound become less afraid of predators, according to a study published this month (April 13) in Nature Climate Change. A team led by Philip Mundy of the James Cook University in Australia has been investigating the effects of ocean acidification on coral reefs by studying the carbon dioxide seep in Milne Bay in eastern Papua New Guinea, the only such known carbon dioxide seep in a coral reef system in the world.

"We found that living in an acidic environment makes small reef fish become attracted to the smell of their potential predators. Their sense of smell was acutely affected in CO2-rich waters in ways that gravely threaten their survival,” coauthor Alistair Cheal of the Australian Institute for Marine Science said in a statement. The fish were also bolder and left the safety of sheltered environments, adding to their vulnerability. The researchers noted that the finding has implications for rising carbon dioxide levels due to rising atmospheric carbon dioxide. 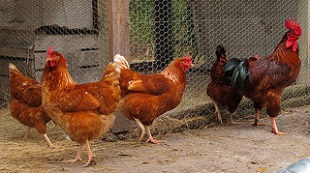 Domestic chickens can shift their attention rapidly, use visual cues to find a target, and ignore distractions, hallmarks of a trait called selective attention, according to a study published last week (April 21) in PNAS. A team led by Eric Knudsen of Stanford University trained chickens to report the vertical position of a target by pecking at it. The researchers provided the birds with horizontal location as a clue of upcoming targets, which increased accuracy. The birds’ accuracy declined rapidly when distractions were introduced, but in the presence of clues, the chickens were able to ignore these distractions. Selective attention has previously only been studied in humans and other primates.

“Given the evolutionary distance ([greater than] 250 million years) and enormous ethological differences between chickens and primates, these similarities suggest that mechanisms for mediating competitive stimulus selection for attention appeared early in vertebrate evolution and that they are conserved across phylogeny,” the researchers wrote in their paper. 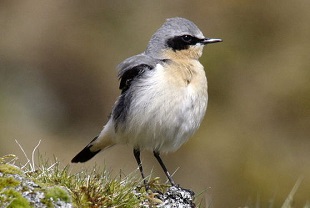 Individual Northern Wheater birds are restless during migratory season—making them more likely to continue migrating and less likely to stay for long periods at stop-over points, according to a study published this month (April 9) in Biology Letters. Migratory restlessness has been studied as a species-specific trait, but not at the level of individual birds. A team led by Franz Bairlein of the Institute of Avian Research in Wilhelmshaven, Germany, studied birds on Helgoland, a small island off the country’s northern shore.

The researchers trapped and fitted transmitters on migrating Northern Wheatears. The researchers found that birds that were more restless in their cages—measured via repeated wing beats caught on microphones—were also more likely to leave the stop-over within one day of being released. Birds that displayed less migratory restlessness were more likely to stay longer at the stop-over. And these findings were independent of factors like exhaustion, fat reserves, and disabilities or abnormalities, the researchers reported. 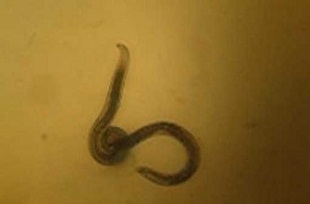 In a nematode species that colonizes dead insect carcasses (Steinernema longicaudum), males fight one another to the death, according to a study published earlier this year (February 24) in PLOS One. The male worms often coil around their opponents tightly and squeeze during aggressive fights. Researchers led by Christine Griffin at the National University of Ireland, Maynooth, found that in the first generation of males to invade an insect carcass, some males are aggressive enough to kill their competitors. “Fighting, let alone fatal fighting, has not previously been described in any other nematode and fighting to the death is relatively rare amongst animals,” Griffin said in a statement.

The key to this aggressive behavior is a developmental switch that is activated when conditions in a carcass lead to heavy crowding that force worms to leave the colony and find other carcasses to colonize. That first generation passes through an infective juvenile (IJ) stage that is characterized by arrested development, the researchers showed. Worms that don’t pass through the IJ stage don’t develop the same blood-thirsty tendencies. The researchers speculated that this aggressive tendency allows the winning males to genetically dominate subsequent generations in the new colony.