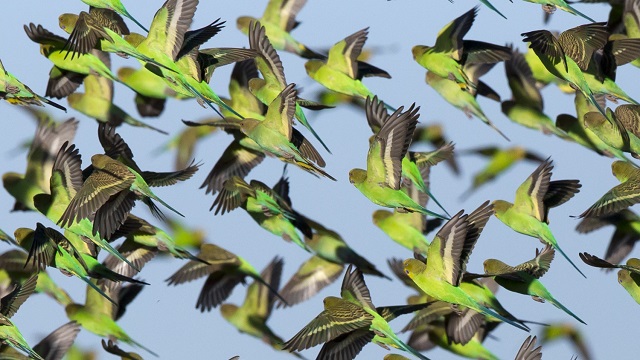 Flocks of birds are able to navigate around obstacles because individual birds prefer the right or left side, according to a study published this month (March 6) in PLOS Computational Biology. A team led by Mandyam Srinivasam of the University of Queensland, Australia, observed how budgerigars chose to fly through wind tunnels in an attempt to understand how the small birds maneuver so swiftly without colliding with obstacles—or one another—in dense forests.

“You cannot help but wonder how they do this so quickly without banging into branches”, Srinivasan told the Brisbane Times. “We wondered if they have any rules when they decided what route to take.”

This left-right bias makes it easier for the flock to split up to get past hurdles without crowding each other and slowing down. The researchers studied how individual birds made flight choices and suggested a next step... 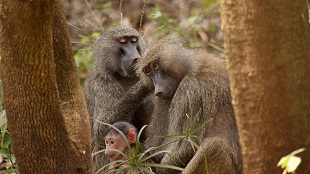 FLICKR, RICHARD TOLLERA baboon’s personality—how bold, anxious, or shy it is—may have a significant impact on how well the animal learns new foraging tasks and teaches them to others. A study published this week (March 11) in PeerJ reported on a three-year study of baboon behavior led by Alecia Carter of the University of Cambridge.

Over three years, Carter and her colleagues conducted field experiments in Namibia, observing how baboons learned about novel food sources from watching their peers. Baboons that were deemed bold or anxious learned faster than more timid animals. The results suggest that tests of animal cognition need to take personality into account, because “animals may perform poorly not because they aren’t clever enough to solve the task, they may just be too shy or nervous to interact with it,” Carter said in a statement.

She also noted that a baboon’s social network may affect how well it learns new tasks. “I couldn’t test some individuals no matter how hard I tried,” she said, because some baboons never chose to interact with others that knew how to use the new food source. 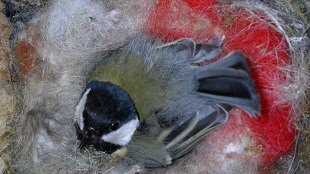 UNIVERSITY OF OULU, OLLI LOUKOLAGreat tits (Parus major) will go to great lengths to keep rival pied flycatchers (Ficedula hypoleuca) out of the neighborhood and to hide their egg-laying successes, according to a study published this month (March 3) in BMC Evolutionary Biology. Pied flycatchers decide where to make their nests based on where the most successful great tits have made theirs.

Researchers led by Olli Loukola of the University of Oulu in Finland played songs of pied flycatchers and waxwings, a non-competitor species—accompanied by decoys—near great tits’ nests. They found that great tits brought more hair to their nests and were more careful about covering their eggs when they heard pied flycatcher songs.

The researchers suggested that this egg-hiding behavior is a counter-adaptation by great tits against the “information parasite”-like behavior of pied flycatchers. In a statement, Loukola called the paired evolution of the two species an “arms race.” 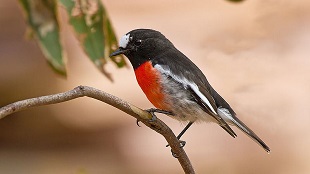 FLICKR, PATRICK K59Bird song has long been seen as an evolutionary adaptation by male birds to attract females. But female bird song appears more widespread than once thought, according to a study published this month (March 4) in Nature Communications.

The research team, led by Naomi Langmore of the Australian National University, studied more than 300 songbird species and found that in 71 percent of them, female birds also sang. When mapped to a phylogenetic tree, they researchers found evidence to suggest that female song was a trait of all songbird ancestors.

This contradicts the theory that bird song is a sexual-selection trait. The researchers suggested that bird song evolved through a broader process of social selection as both sexes competed for food and other resources. “Female song can no longer be considered an evolutionary oddity,” Langmore told ABC’s the Bush Telegraph. 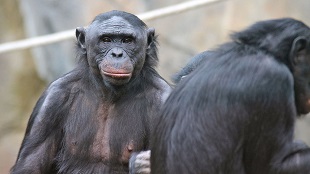 WIKIMEDIA COMMONS, PSYCH USDBonobos, an endangered species closely related to chimpanzees, are able to match musical tempo and keep time with it, according to new findings presented last month (February 15) by Patricia Gray of the University of North Carolina in Greensboro and Edward Large of the University of Connecticut at the annual meeting of the American Association for the Advancement of Science.

Gray, Large and their colleagues built a large, sturdy drum that could stand up to bonobo jumping and rough-handling. To the tune of 280 beats per minute—about the tempo of human speech—bonobos could pick up the beat and synchronize with it, the researchers found.

"It's not music, but we're slowing moving in that direction," Large told Reuters.

The team would next like to study whether bonobos in the wild exhibit any synchronization behaviors with their peers—coordination that would suggest a higher level of social interaction and communication among the apes.